It has been over 12 years since the last Cascade volcano was erupting. You have to go back even further — over 100 years — to find a Cascade eruption that didn’t happen at Washington’s Mount St. Helens. Yet, we know that one of these majestic peaks stretching from British Columbia to California will erupt again. So, how does the scientific community prepare for that next eruption?

That’s why over a week in November, 60+ volcanologists from the universities, research labs, US Geological Survey and more got together and ran what might best be described as a big eruption live-action role play (or LARP in the gaming parlance). This exercise, organized by the Community Network for Volcanic Eruption Response (CONVERSE) – a project supported by the National Science Foundation – attempted to mimic what might happen during a new Cascade eruption and how all these people inside and outside the official channels could work together to understand and communicate about the unfolding volcanic crisis.

What’s Next in the Cascades?

There are a lot of potential candidates for the next Cascade Range eruption. The USGS compilation of Cascade eruptions over the past 4,000 years shows just how active these volcanoes are (on a geologic timescale). So, even though we have only seen three eruptions (one of them big) since 1900, this should’t lull us into a sense of complacency about the only volcanic chain in the lower 48 states. 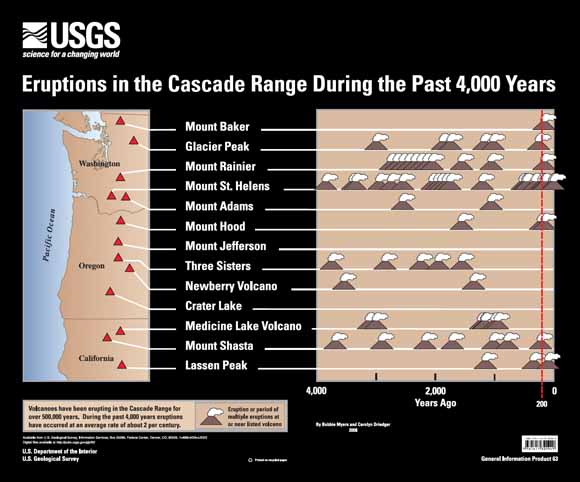 Known eruptions in the Cascade Range over the past 4,000 years. Credit: USGS.

That’s because, even though they might be quiet now, the most potentially dangerous volcanoes lie in the Cascades. Eruptions from any number of these volcanoes could impact cities like Seattle, Tacoma, Portland, Bend and more. They could stop traffic on major highways like I-5 or I-84. They could shut down major airports like SeaTac. The hazards are very real if these volcanoes come back to life.

That’s why it is good to be prepared for such events. When a Cascade volcano rumbles back to life, it will be the job of the US Geological Survey’s two volcano observatories for the range to understand what is going on. The Cascades Volcano Observatory (in Vancouver, WA — handling Oregon and Washington) and the California Volcano Observatory (out of Menlo Park) would be the first line of volcanologists to start mapping out what might happen if signs of an eruption start. This might include earthquakes, gas emissions, changing of the ground surface, increasing ground temperature and more.

Yet, the USGS is also backed up by academic researchers who study these volcanoes as well. I count myself as one of these as I have projects looking at both Mt. Hood and the Lassen Volcanic Center. The wealth of knowledge that could come to bear during a volcanic crisis could be invaluable to those trying to monitor the rumbling volcanoes.

So, as the hypothetical eruption unfolded, the scientists involved were asked to think how they might respond to events going on. What data would be useful to collect to understand the eruption? What data already exists that could be used to model what might happen next? How could these requests for samples or information be communicated to the USGS … and who would pay for them? All of this was done to stress test the interactions between the scientists in the thick of it (the USGS, mostly) and the academic community who might be all over the planet, watching. 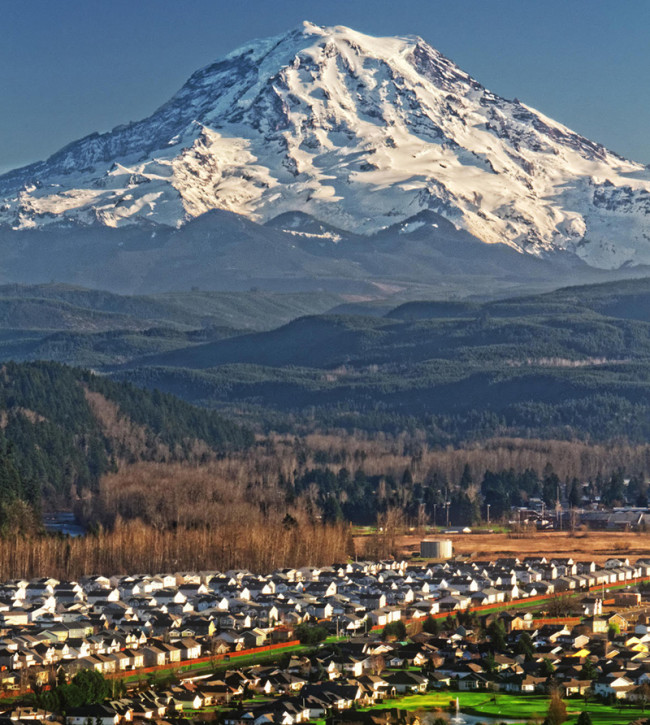 I was lucky enough to take part in this CONVERSE exercise as part of the communications team. The team was made up of scientist-communicators from the USGS, universities, media and more. Our job was to both try to think of the best ways the community could disseminate information about the eruption to the public, but also how to do the same to the scientific community … and how to prepare scientists for the demanding role of communicators during a crisis.

Based on the media attention that the 2018 eruption at Hawaii’s Kilauea garnered, you could expect that if any of the big Cascade volcanoes like Mt. Hood, Mt. Rainier, Mt. Baker, Mt. Shasta or Lassen Peak started to show sign of life, the country would be abuzz about it. Those of us who did many interviews for media about the eruption know the pressure of making sure you are sharing the right information in the right way and (shockingly) few of us have had a formal training on this front. Part of the CONVERSE goals is to think of how we can quickly training scientists to handle this potentially unexpected role.

We in the communications team also played the role of the media (both traditional and social) during a volcanic crisis. We would lob interview requests from various media sources to USGS and academic scientists, probe them with questions about the eruption to see how they might respond. We produced both accurate and sensationalist tweets from news sources to prompt officials to respond. We spread rumors and planted false/misleading information from bad actors on social media. You know, all the stuff the scientific community might expect during an eruption of one of these Cascade eruptions.

Being Ready for the Next Eruption

In the end, what we learned from this exercise — especially those who hadn’t been in the thick of a crisis before — is just how stressful even a simulated eruption can be. Events change fast, the needs of the government (local and national) rapidly evolve, the media demands increase exponentially during the crisis. All of this is happening as scientists are just trying to understand the signs that the volcano is showing so the USGS can make accurate statements about the potential activity.

It is always better to prepare for a crisis than let one sneak up on you. Groups like CONVERSE are trying to take a proactive role in developing methods that will allow for information, expertise and people power to best be utilized during the next Cascade eruption. Sure, it might not happen for decades … or it might happen next year. I’d say that many of us now have a better idea of what to expect when that volcano does start rumbling.