If you’ve found yourself glued to your video game console during the COVID-19 pandemic, you’re definitely not alone. In the first quarter of 2020, Americans spent a record $10.86 billion on video games. Twitch, a popular video game streaming platform, saw its daily hours watched spike from 13 million to 31 million between Jan. 1 and March 28. And for months, the supply of Nintendo Switch consoles — a popular choice for kids, casual gamers and aficionados alike — simply wasn’t able to keep up with demand. In short, video games are clearly having a moment.

It’s not hard to understand gaming’s appeal right now, from simple escapism to the ability to maintain connections with friends and family, albeit virtually. For the most part, though, video games aren’t necessarily known for their scientific fidelity. (Sorry, Super Mario fans, but the practical implications of a pudgy plumber who can smash through solid brick are pretty horrifying.) Yet, if you look close enough, you might just spot a few striking examples of real-life science lurking in some of the year’s biggest releases.

Partway through The Last of Us Part II, as the protagonist, Ellie, you trudge through the flooded, crumbling ruins of an old bookstore. At one point, your flashlight falls on several cartoonish, pink mushrooms painted on the walls. “Pretty messed up, putting mushrooms in the kid’s section,” another character notes grimly. “Mushrooms didn’t exactly carry the same meaning back then,” Ellie responds. 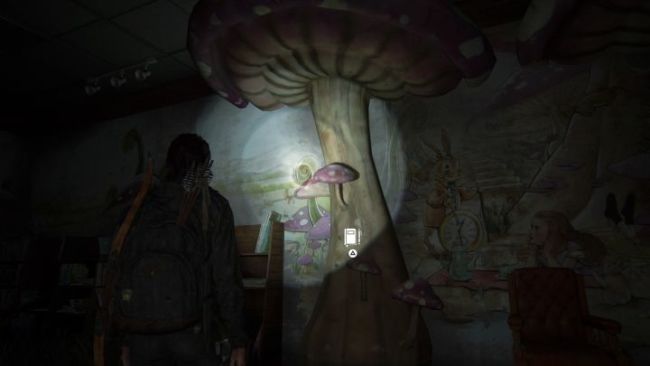 The post-pandemic world in The Last of Us (and this year’s The Last of Us Part II) is set decades after an infection has ravaged 60 percent of the U.S. population, turning the survivors into shambling, ravenous zombies. In the game, the infection — dubbed the Cordyceps Brain Infection — is caused by a parasitic fungus, a mutated strain of the genus Cordyceps. Messed-up mushrooms, indeed.

If the name of the infection sounds familiar, that’s because it is; in real-life, Cordyceps contains around 400 species. These parasites reside in the bodies of other living things, from insects to fellow fungi. Unlike their fictional counterpart, however, not all of them are nefarious — well, at least not for humans. One species, Cordyceps subsessilis, which gets its nutrients from beetle larvae, has been used to make drugs that suppress the immune system for organ transplants.

But the most well-known variant — and the closest real-world analogue to the infection in The Last of Us — is Ophiocordyceps unilateralis, which targets carpenter ants. In a popular clip from BBC’s Planet Earth, a time-lapse video shows how the fungus zombifies its prey. Spores from the fungus traverse throughout the ant’s body, persuading it to crawl into trees and bite onto leaves high above the ground. This “death grip” lasts even after the ant’s demise. The clever fungus kills its host outside of the colony to make sure no do-gooder ants remove their dead nest-mate before the parasite can reproduce. Then, it slowly eats away at the afflicted ant’s tissue, leaving only an exoskeleton behind — and a long, fruiting stalk that slowly grows out of the back of the bug’s head. Once the fungus is finished growing, it showers spores on any unsuspecting passersby, starting the process again. Fittingly, scientists have dubbed the infected insects “zombie ants.”

In The Last of Us, and its sequel, the fictional Cordyceps fungus also causes its human hosts to sprout stalk-like growths out of their corpses, and even spew clouds of spores. But while the games’ infection notably targets the brain, scientists have discovered that’s not actually how the real-life fungus controls insect behavior. Penn State biologist David Hughes, who consulted on the first game, coauthored a 2017 study in which researchers found that Ophiocordyceps unilateralis doesn’t reach the brain at all — it just hijacks the rest of the ants’ bodies, instead.

What do Gregor Mendel and Nintendo’s newest, record-shattering Animal Crossing installment, New Horizons, have in common?
No, it’s not the setup to a bad joke; the father of modern genetics actually plays a not-so subtle role in shaping one of the game’s main mechanics. For much of New Horizons, you wander around a cutesy, cartoon island as a lone human among a community of anthropomorphized animals. You can catch fish, dig for fossils, build your dream house and mingle with the local townsfolk. But at least one gameplay element — cross-breeding flowers to make hybrids — is firmly rooted in reality. 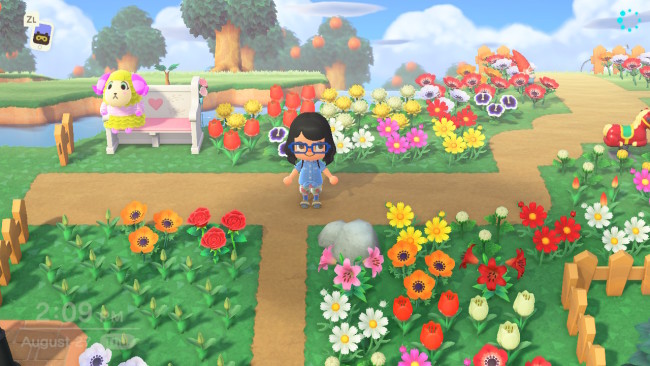 In New Horizons, a variety of flower types, including lilies, mums, tulips and roses, can be planted or found on your island. Beyond that, you can also buy flower seeds in a few basic colors: red, white and yellow. “Then, you can breed them and make different colors,” says Jordan Harrison, an organizer for ChiTownBio, a community biology lab in Chicago. “You can make [other colors like] orange, purple and blue. And you would think that if Nintendo had done a very simple algorithm to come up with new flower colors, [if] you would put a red flower and a yellow flower together, you’re going to get an orange one.”

But as players observed what happened when they tested new flower combinations, continues Harrison, the outcomes weren’t quite that predictable. For example, breeding a red flower with a yellow flower might cause another red — or yellow — plant to bloom.

Those observations led tech-savvy gamers to look into the game’s code and figure out exactly how the flower algorithm works. “They found that it’s set up pretty much [exactly] like Mendel’s laws,” says Harrison. If it’s been a while since you learned about how traits are passed from one generation to the next in school, here’s a refresher: By cross-breeding pea plants in his abbey gardens, 19th-century monk Gregor Mendel discovered several fundamental laws for a particular type of genetic inheritance. Namely, that each parent passes down factors, later called genes, to its offspring that don’t blend with the factors from the other parent — and that certain observable traits from these offspring take precedence.

When Mendel crossed purple and white pea plants, for example, he found that the offspring were purple, not mixed, indicating that one color was dominant over the other. “You see these laws that Mendel came up with in the flower colors,” says Harrison. “When you look into the code, you find that there are four genes that control all of the flower varieties.”

Since the game’s release this March, a crop of online guides have sprouted up to help players more efficiently grow their own flower hybrids. And some of them — like the elusive blue rose — may require a little more patience than others. Given the complexity of the game’s genetics system, plus the sheer number of possible color combinations, it can take weeks for these pesky perennials to blossom. “I think it takes five or six generations to get to that point,” says Harrison. “I [still] haven’t gotten the coveted blue rose, but I am on my way.”

Lessons on Geometry in Half Life: Alyx

The latest game in the much-loved Half Life series, Half Life: Alyx, is a shining example of where video game tech may be headed. The 2020 title is a landmark release in virtual reality gaming, allowing players to strap on a headset and sensors to immerse themselves in a fully realized science fiction world. In one of the game’s opening moments, players can pick up a virtual dry-erase marker, press it against a dirty greenhouse window and create scribbles that appear right before their eyes.

But while other players were busy battling alien invaders, one teacher in California decided to use the game to teach a virtual math lesson on angle vocabulary during the state’s COVID-19 lockdown in March. “I was teaching on Zoom, each day, and Half Life: Alyx came out on a weekday; I was installing it in the background as I was teaching,” says Charles Coomber, who teaches at Otay Ranch Academy for the Arts in Chula Vista. “I jumped right in after my lesson, so I was still in teaching mode. I got in that very first room, with the markers, and was like, ‘Oh my god — these can write so well.’ “ 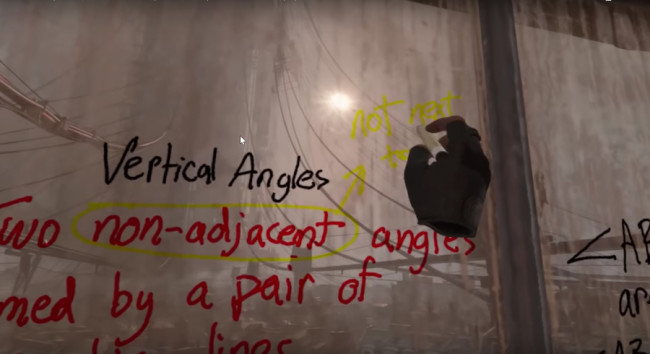 It didn’t take long for Coomber to get to work, using the game’s windows to sketch out a seventh-grade geometry lesson. In a video upload of the lesson, which you can see for yourself on YouTube, he walks his students through concepts like supplementary and complementary angles, complete with example equations. “It’s much more visually engaging,” says Coomber, noting that the lesson’s novelty was a refreshing break among the doldrums of remote learning. “Imagine, day after day, watching your teacher drearily write on a whiteboard. Usually, you just have a static camera facing the whiteboard. It gets boring fast, even adults would look away. Kids will watch that [lesson] over and over again.”

Coomber’s clever improvisation isn’t the only example of educators using Half Life: Alyx to provide students with a fresh way to interact virtually — a much-sought after realm during the pandemic. High school teachers in Poznan, a city in western Poland, also used the game to teach virtual lessons during lockdown, even working with a local media company to bring virtual-reality tech into the classroom. “We can use VR to take them on virtual tours to another country, to another planet — the sky is the limit here,” Katarzyna Sut, an English and Spanish teacher at Skola 33, told Upload VR. “The cognitive process becomes more natural, as opposed to just reading about things in books.”

“VR looks very promising,” she added. “We are very optimistic about it right now.”