After years of anticipation, NASA hopes to launch its latest robotic explorer, Perseverance, to Mars on Thursday, July 30, at 7:50 A.M. EDT. Set to depart Earth atop an Atlas V-541 rocket from historic Launch Complex 41 at Cape Canaveral Air Force Station in Florida, the ambitious rover is the latest in a long lineage of rolling robotic explorers that NASA has sent to the Red Planet.

If Mars 2020 is not able to blast off during its two-hour launch window tomorrow morning — due to hazardous weather or unforeseen technical issues — the space agency will have just two more weeks to get it done. That’s because after August 15, Mars and Earth will no longer be aligned in a way that allows for quick interplanetary travel, meaning NASA would have to store the rover for two years until the next favorable alignment.

However, if Perseverance does launch between July 30 and August 15, it’s expected to land in Mars’ Jezero Crater on February 18, 2021. And once it touches down within the ancient martian lake and river delta, it will set to work on its main goals. 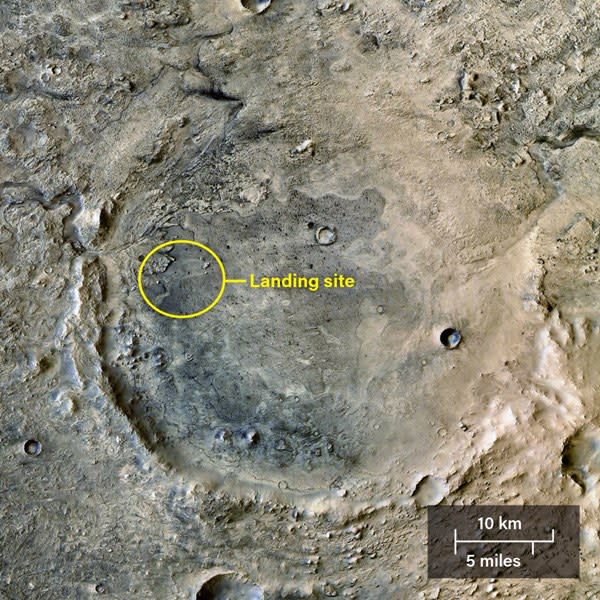 Jezero Crater is seen in this natural-color mosaic made by combining shots from the Mars Reconnaissance Orbiter and Mars Express. The Perseverance rover’s landing site (circled) is near the ancient river delta that winds from the crater’s rim on the left. (Credit: NASA/JPL/MSSS/ESA/DLR/FU-Berlin/J. Cowart)

What Will Perseverance Do, Anyway?

“We have four objectives,” Ken Williford, Deputy Project Scientist for NASA’s Mars 2020 mission, told Astronomy earlier this year. “The first three are really our core science objectives. And the fourth is … preparing for human exploration.”

Perseverance’s science objects are: seeking out sites that were potentially habitable in the past, looking for signs of ancient microbes within rocks known to preserve life, and collecting and storing promising rock samples for a future return mission.

The rover aims to accomplish these goals using a unique and sophisticated suite of instruments — including a rock-blasting laser, microphones and cameras, a powerful coring drill, a mobile weather station, and the first ground-penetrating radar ever sent to Mars’ surface. Although there are some new additions to Perseverance, many of these high-tech tools are just upgraded versions of what the Curiosity rover carried to the Red Planet in 2012. And that’s because NASA is employing what they call the “heritage approach” for Perseverance, borrowing what worked from Curiosity.

“[Perseverance] is something like 90 percent spare parts from Curiosity,” Jim Bell, principal investigator for Perseverance’s Mastcam-Z instrument, told Astronomy earlier this year. “That’s how they got the mission approved, because they could save an enormous amount of money by using those spare parts.”

But that doesn’t mean Perseverance is cheap. It’s still about a $2-billion project, and NASA expects to spend up to a total about $2.7 billion over the entirety of the mission. 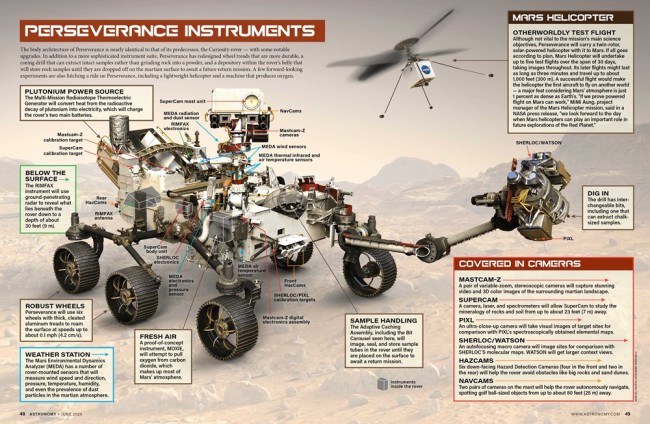 Despite borrowing much of its technology from Curiosity, Perseverance includes a few new gadgets.

The Perseverance rover is built to not only collect, but also store rock and soil samples for future return to Earth. Using its rotary percussive drill, the rover will dig into rocks that other instruments deem intriguing. This will force a cylindrical core, about the size of a piece of chalk, into the hollow drill bit. Perseverance will then use an internal camera to image the sample, hermetically seal it in a titanium tube, and store it in its body until the rover is ready to deposit it on the martian surface.

Eventually, a future (and so-far unplanned) mission will send another small rover to Mars to collect the samples and load them into a rocket, which will blast them into orbit around Mars before the start their journey back to Earth. Once the martian samples reach terra firma, researchers will scrutinize them with most powerful lab equipment that exists. 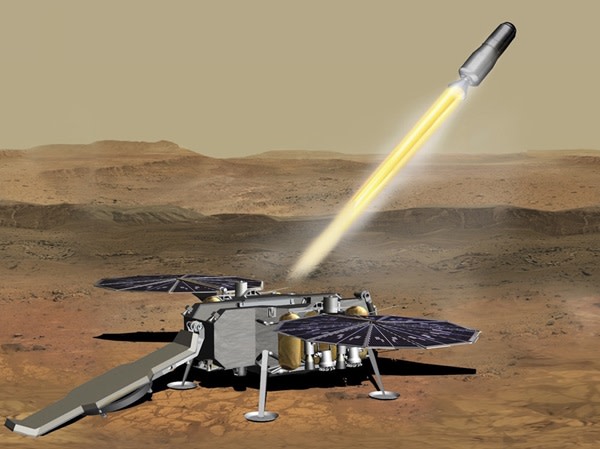 NASA’s Mars Ascent Vehicle, seen in this artist’s concept, would ferry rock and soil samples collected by Perseverance into martian orbit. The samples would then hitch a ride to Earth aboard another spacecraft. (Credit: NASA/JPL-Caltech)

There’s also Perseverance’s helicopter: Ingenuity. At just under 2 feet (0.6 meters) tall and weighing less than 4 pounds (1.8 kg), Ingenuity honestly can’t do much. But it can take off, hover a few dozen feet above the surface, and land on flat ground. This technology demonstration has no bearing on Mars 2020’s larger scientific objectives. But if the tiny helicopter can prove it’s possible to fly in Mars’ thin atmosphere, then the data it collects may help engineers build a better, larger Mars helicopter capable of exploring areas that traditional rovers can’t.

According to Michael Hecht, MOXIE’s principal investigator, this proof-of-concept experiment might be able to produce between about 6 and 10 grams of oxygen per hour. While that would be a great triumph for MOXIE, humans need about 20 g of oxygen per hour to survive. So, the technology would need to be dramatically scaled up before it could supply enough oxygen for astronauts to breathe, let alone enough to use as locally sourced rocket propellant. 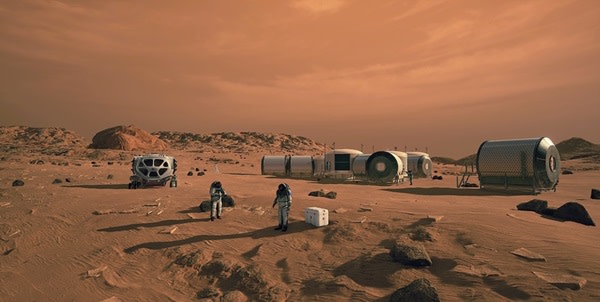 Thanks to forward-thinking missions like Perseverance, the idea of humans on Mars doesn’t seem as far-fetched as it once did. (Credit: NASA)

According to Hecht, MOXIE is more than just an oxygen-production test, though. It’s a test of whether we can harness the power of electrochemistry on another world. Hecht says that if astronauts eventually gain access to water on Mars — providing a reliable source of hydrogen — scientists can tweak MOXIE’s basic technology to make more complicated products.

“Once you have water and you have electrochemistry,” Hecht says, “you can start making anything from paraffin to beer.”

So, when you track Perseverance rising above Earth’s clouds on its way to the Red Planet tomorrow morning, keep in mind that the technology it’s bringing to Mars isn’t just searching for ancient alien life. It’s also paving the way for humans to enjoy their first martian microbrew.

This article was originally published at Astronomy magazine. Read the original story here.