What seemed impossible not long ago is now on the verge of becoming routine. A SpaceX Crew Dragon capsule successfully launched into orbit on Sunday night from NASA’s Kennedy Space Center in Florida, setting four astronauts on a course for the International Space Station (ISS). It’s the second crewed launch for SpaceX this year.

By Monday night, the four astronauts will rendezvous and dock with ISS. They’ll spend the next six months carrying out scientific experiments alongside fellow astronauts and cosmonauts who are already on board, bringing the total number of crew members on the space station to seven.

This particular Crew Dragon capsule mission is named Resilience, a nod to the extreme difficulties that were overcome to make this historic launch happen, including this year’s COVID-19 pandemic.

“The message that [the crew] wanted to convey is resilience,” NASA’s ISS program manager Joel Montalbano said at a briefing on Friday. “It was a hard journey to get here.”

It wasn’t just COVID, either. For NASA and SpaceX, the difficult journey to Sunday’s launch has stretched out over nearly a decade. When NASA formally retired the Space Shuttle Program in 2011, the federal government decided they’d focus their efforts on getting astronauts to the Moon and Mars, while paying private companies to ferry people and cargo to the space station.

NASA imagined the first Commercial Crew Program flight would happen in 2016. But SpaceX and Boeing, the companies hired for the job, were hit by a seemingly unending series of delays. In the meantime, American taxpayers were left paying for tickets on Russia’s Soyuz rockets in order to get NASA astronauts to the largely U.S.-funded space station.

Earlier this year, during the Demo-2 mission, SpaceX Crew Dragon Endeavor spacecraft was pulled from the Gulf of Mexico by SpaceX’s GO Navigator recovery ship. It was then nestled into the “Dragon nest”. (Credit: NASA/Bill Ingalls)

However, over the past two years, SpaceX has slowly overcome its early challenges. The company is now the only contractor to successfully ferry astronauts. In May, SpaceX’s Crew Dragon spacecraft successfully carried two NASA astronauts to the ISS on a demonstration mission, called Demo-2. That trip was the first time astronauts had traveled into orbit on a private spacecraft. Elon Musk’s rocket company also launched an empty Crew Dragon capsule to the space station on a fully robotic test flight in March 2019.

Now, nine years after the last space shuttle flew, America finally seems to have a reliable ride into orbit again. And as important as this milestone was for NASA, it also opens up the solar system for SpaceX.

NASA has formally certified the company to fly astronauts into orbit, which means SpaceX can begin launching space tourists, too.

“This is the culmination of years of work and effort from a lot of people and a lot of time,” Benji Reed, director of crew mission management at SpaceX, said at a media event this week. “We have built what I think is one of the safest launch vehicles and spacecraft ever.”

And this week, Axiom Space, another private spaceflight company, announced that it had booked the first private astronaut trip on SpaceX’s Crew Dragon. The Ax-1 mission will carry four private citizens to the ISS in late 2021. Additionally, Richard Branson’s spaceflight company, Virgin Galactic, aims to send the founder to suborbital space early next year, officially kicking off their space tourism venture.

SpaceX will also now start flying crewed trips to the ISS for NASA every six months. Next year, one of those missions could even include a Russian cosmonaut, the space agency announced on Friday. 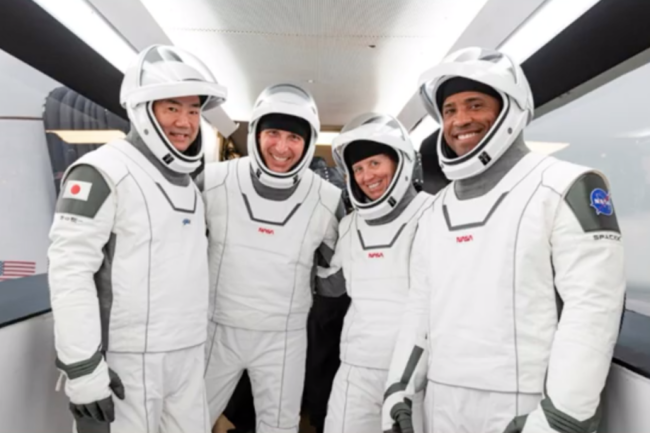 Glover is a former test pilot and Navy commander with three master’s degrees, as well as a legislative studies certificate from Georgetown University. He served on Arizona senator John McCain’s staff before becoming an astronaut candidate in 2013. Glover will be the first Black crew member of the ISS, which has now been in orbit for 20 years.

Hopkins is a NASA astronaut who served on the ISS back in 2013 and 2014, but over the summer, he also became a colonel in the U.S. Space Force. His launch Sunday marks the military agency’s first person in space.

Walker also is no stranger to the ISS. She spent over 150 days there on her only trip to space back in 2010. While most astronauts are highly credentialed, Walker stands out for her background in science — she holds a Ph.D. in space physics from Rice University. She’s also one of a handful of astronauts married to other astronauts (her husband is NASA astronaut Andy Thomas). Bob Behnken, who’s currently serving on the ISS, is also married to a fellow NASA astronaut. 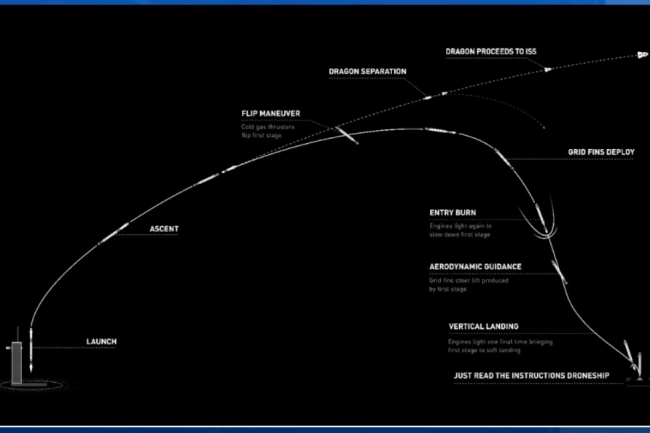 After the Crew Dragon capsule launched into orbit, the rocket booster performed a series of maneuvers land successfully at sea on a drone ship, where it was recovered for the next launch. (Credit: SpaceX/NASA)

Now that NASA has so many astronauts on board the ISS, the agency plans to begin a heavy, six-month itinerary of scientific experiments.

Roughly 60 pounds (28 kilograms) of scientific experiments were launched on the Crew Dragon Sunday. And another haul is set to be delivered on the next Cargo Dragon resupply mission.

“We hope to double the amount of crew time going into science and research,” Costello said during a briefing. “We’ll have easier access to our crew members both pre and post flight.”

That access will let NASA researchers do more in-depth studies of how space changes astronauts’ bodies. The astronauts will be experimenting on themselves more than ever, starting with a study of how nutritional changes in their diets might prevent negative effects of spaceflight.

Another experiment, called Genes in Space 7, will study how sleep cycles change in space. “On orbit, when you have 16 day-night cycles every day it can be a bit confusing to the body,” Costello said. To learn more, the crew will study how fruit flies react to the environs of the space station.

And that’s just the beginning. Each of the four astronauts is expected to devote significant amounts of time to experiments over the next six months, prompting Costello to dub it a “new era” of space station research.

As SpaceX’ Crew Dragon — and eventually Boeing’s Starliner — continue increasing the space station’s population in the coming years, we should expect many new discoveries to come.