This Piece of Mind column originally appeared in the December issue of Discover magazine as “Confessions of a Recovering Perfectionist.” Support our science journalism by becoming a subscriber.

On a rainy January afternoon, I walked down the hallways of a huge building and entered a grim, windowless room. A frazzled adjunct college instructor, I was about to interview for a full-time faculty position. I took a seat at the conference table and faced the search committee. Soon, the nine members began firing questions at me. I tackled each without hesitation, until they asked about a class I had taught that hadn’t gone as planned. I started scrambling for an answer. The truth was that I always spent hours preparing for every lecture, activity and discussion to maintain control and avoid anything unexpected. It’s part of my all-consuming quest for perfection.

Besides making me fumble through a job interview, this tendency has driven me to fret over the tiniest mistakes, waste ridiculous amounts of time procrastinating and stress to the point of burnout. The issue began threatening my sanity soon after I immigrated to the U.S. in my mid-20s. Growing inner turmoil has accumulated over the 10 years since my move. So, I recently decided to take a painful peek into my psyche to confront the bad, the ugly and the imperfect.

I called Gordon Flett, a psychologist at York University in Toronto who has studied and theorized about the inner workings of a perfectionist’s mind. He painted a bleak picture: Many perfectionists spend a lot of time worrying and brooding, immersed in a secret dialogue with themselves about needing to be flawless. “When they’re falling short of perfection, they’re constantly ruminating about it,” he says.

Flett has even developed a scale to measure “mistake rumination” — mulling over something one has done wrong — and examined how it relates to perfectionism. In a series of three studies involving more than 970 people, Flett and his colleagues asked participants to think about the last time they made a major mistake. The people then rated how much they had agonized about the event.

The researchers identified a link between amplified mistake rumination and two flavors of perfectionism. One entailed having an internal drive for perfection; the other involved believing others require you to be impeccable — which may or may not coincide with reality. The results of Flett’s study, published in 2019 in the Journal of Psychoeducational Assessment, also revealed a strong connection between overthinking past mistakes and an uptick in incessant thoughts urging a person to be perfect — what some call perfectionistic automatic thoughts.

I’ve struggled with both mistake rumination and thoughts demanding flawlessness. I once took up an obsessive hobby: inspecting my past job applications for errors. One night, armed with a glass of cabernet and accompanied by my three cats, I pored over the cover letter I had submitted to the nine-person committee. Then I found it. A missing comma, staring me down in the first paragraph. I beat myself up over it for days, panicking that someone might have noticed. The voice driving me toward perfection reverberated in my mind. No amount of wine, nor comforting nudges from my furry assistants, would silence the self-inflicted shame.

Perfectionists tend to feel self-conscious about everything they do. “That leads to a lot of self-reflection, and for some, to feeling like they’re an impostor,” Flett says, “that they’re not as good as others.” 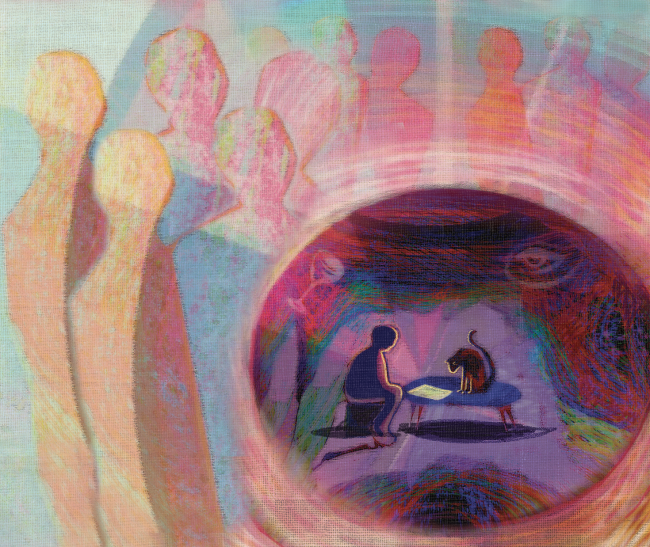 Indeed, a body of research has shown that perfectionism often goes hand in hand with impostor syndrome — doubting your accomplishments and fearing you will be sniffed out as a fraud. Kevin Cokley, a psychologist at the University of Texas at Austin, examined feelings of intellectual phoniness, self-esteem and two kinds of perfectionism — adaptive and maladaptive — in 468 people. Adaptive perfectionists simply have high personal standards, while maladaptive ones set a bar that they believe is out of reach. (Some researchers, including Flett, contend that no form of perfectionism is healthy. But there are certainly shades of severity.)

Cokley found a relationship between impostor syndrome and indicators of maladaptive perfectionism, but not the adaptive form. The link grew stronger if a person’s self-esteem was low, according to the findings published in 2018 in Personality and Individual Differences. “Even if an individual is competent, smart and highly accomplished, having these maladaptive perfectionism tendencies can lead to one feeling like an impostor,” Cokley says.

My struggles with maladaptive perfectionism and impostor syndrome escalated when I was a journalism graduate student in New York. During my first week, a classmate asked where I was from, upon hearing my foreign accent. I said I was from Poland and he asked if I knew any jokes about Polish people. I swallowed my discomfort, but the interaction lingered deep in my subconscious. It chipped away at my self-esteem. It made me feel like I was a joke.

And so I tried to wipe out my otherness through perfection. I obsessed about crafting flawless stories for class, but the fear of not hitting my unreasonable standards stalled my writing process. It sometimes made me miss deadlines — procrastination, research has shown, is also tied to perfectionism. It also caused me to regularly burst into tears in crowded subway cars. Grades below an A-minus often sent me into despair. I labored over schoolwork seven days a week, which paved a road to workaholism.

Lonely and Burned Out

Ironically, perfectionism has a way of distancing people who want to fit in. For me, it made me lonely. In one 2016 study of more than 270 people, published in Personality and Individual Differences, researchers looked at participants’ levels of neuroticism, social anxiety and perfectionism. The investigators concluded that people who worried about being seen as less than perfect and those who did not like to admit their shortcomings were more prone to feeling uneasy about interpersonal interactions. Unpublished data from other work revealed that the ensuing isolation may lead to increased loneliness among perfectionists. They avoid other people, says Flett, who co-authored the study. “That can set them up for not getting the kind of support they need when other problems arise.”

I’ve definitely dodged interactions due to my perfectionism. I even became a freelance writer so I could work alone. At home, only my cats judge me. I eventually crawled out of my hermitlike shell and started teaching classes as an adjunct, but still hesitated to make friends. When I later embarked on a search for a full-time academic job, I lacked social support and paid an exorbitant emotional price for it. I felt alone in the seemingly endless cycle of applying, interviewing and getting rejected.

Living in the shadow of your own unreachable standards can exhaust you. In 2015, an analysis of more than 40 studies in Personality and Social Psychology Review linked perfectionistic concerns to burnout. The exhaustion arises when people worry about making mistakes, fear negative evaluation by others and see a mismatch between their own towering expectations and performance. “When you’re high in perfectionism, even trivial things can be stressful,” says lead study author Andrew Hill, a psychologist at York St John University in the U.K.

My burnout reached its peak toward the end of that academic job search season. I was teaching four adjunct classes at two different colleges and still working as a full-time freelance writer. I got the silent treatment from one search committee, and a rejection email from a similar promising opportunity. I had one remaining scheduled interview, at a lush green campus adorned with a fountain, and could not sleep the night before the big day. Then it finally happened: I was too tired to be perfect. I no longer attempted to hide my flaws. I took the chance to be myself and talked about how I tried to manage my time but sometimes failed.

It worked. I got the job.