From ‘extreme’ knitters and Insta-knit groups to knitting circles that are hotbeds of activism, Cassidy George explores how a traditional craft became fashion-forward and radical.

Of all of the so-called ‘domestic crafts’, knitting remains the most laden with stereotypes in the public imagination. While baking and gardening have mostly rid themselves of associations with ‘women’s work’, knitting still, for the average person, conjures images of an elderly white woman, sitting in a rocking chair or in a circle of her peers. In fact, this assumed demographic only describes a fraction of the world’s knitting community, which has blossomed in the 21st Century. As a creative outlet with therapeutic benefits, it has proven to be a trending activity in life under lockdown for people of various ages and backgrounds. And recently, knitting has also come into fashion proper, thanks to a new generation of designers, who are transforming the ‘old-fashioned’ practice into a high-fashion art form.

– The quirky charm of Norwegian design

Knitting (derived from the word ‘knot’) is the process of using two or more needles to create a fabric made of a series of interconnected loops. The documented history of knitting begins with a pair of Ancient Egyptian socks, from the 3rd to 5th Century AD. The structural complexity of the first socks, however, suggest that knitting is far older than archaeologists can prove. Knitting spread from the Middle East to Europe via Mediterranean trade routes in the 14th Century, and even has its own art historical record; Master Bertram of Minden’s Visit of the Angel – in which the Madonna is depicted knitting – dates back to 1410. Knitted wool garments became popular in the UK from Medieval times onwards, because of their weather-resistant qualities, particularly among soldiers, sailors and labourers. William Lee of Calverton invented the first technical knitting machine in 1589, which transferred the bulk of the industry out of rural towns into city centres. 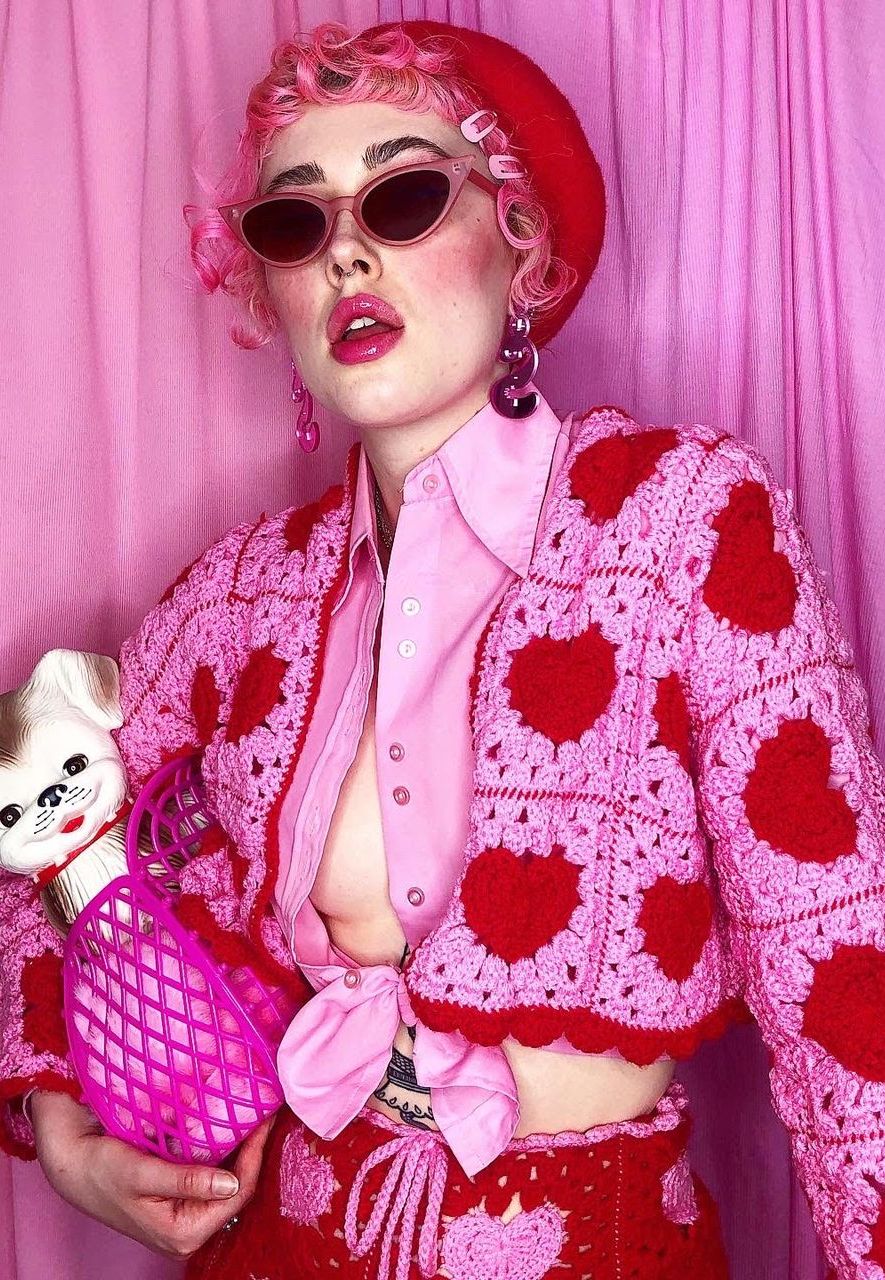 Crochet designs by Lizzie Morgan are among a new wave of knitwear to emerge recently (Credit: Elizabeth Whibly, courtesy of Lizzie Morgan)

Both women and men knitted professionally for centuries, and it wasn’t until the mid-to-late 19th Century that it became associated with domesticity. Author and historian Penelope Hemingway tells BBC Designed: “For the middle classes, it became a parlour hobby, consigned to the part of women’s lives lived in the spaces between men’s more public-facing lives. This ‘feminising’ led to knitting being perceived as an ‘idle’ waste of time; a feminine pursuit to be followed safely from within the cage of domesticity.”

Knitting remained a useful skill for people with limited resources or disabilities in order to earn income, which Hemingway says also contributed to its associations with older generations. “In an era before the welfare state and pensions, it was one way the elderly could stay economically active.” Its associations with housewives became more pronounced after the world wars and Great Depression, when women were encouraged to knit for the war effort, or turned to knitting and mending out of necessity; knitting still maintains connotations with the familial structures, gender roles and tastes of women who embraced it long ago. 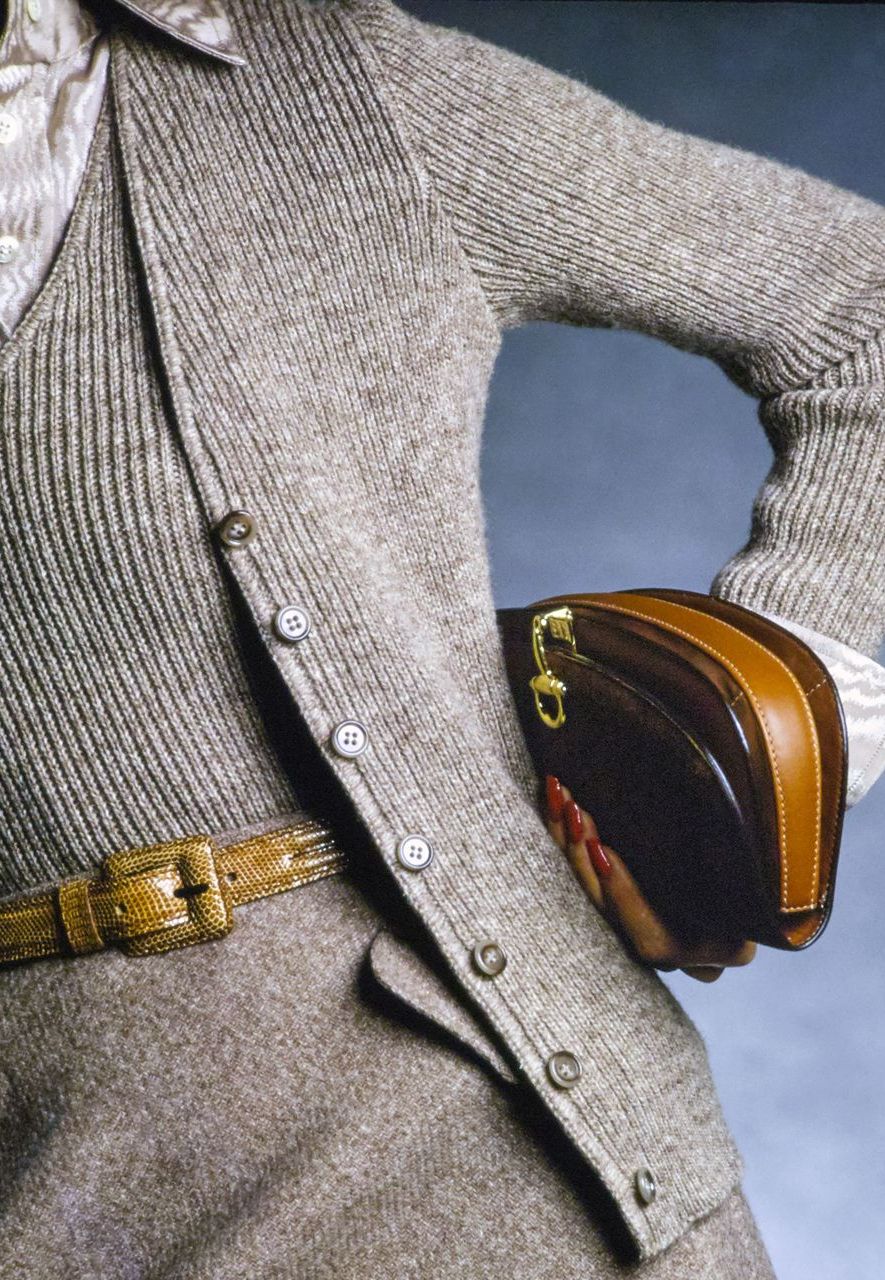 Yves Saint Laurent was among the designers to champion knitwear in the 1960s and ’70s (Credit: Getty Images)

Like most things in the world of high fashion, knitting has fallen in and out of favour over the course of the 20th Century. Coco Chanel, who incorporated knits into her signature suits, also emphasised knitwear as ideal for recreational activities like sailing or sports. Sweater sets and A-line skirts, designed by the likes of Emilio Pucci and Missoni, characterised the 1950s and ’60s, and designers including Yves Saint Laurent, Sonia Rykiel, Calvin Klein, Liz Claiborne and Diane von Furstenberg have used knits regularly in their collections since, furthering its associations with either affluence and preppiness or ease. For most of the 20th Century, knitwear was used in clothing that was relatively conventional, although towards the end of the century, pioneers like Vivienne Westwood, Alexander McQueen and Julien Macdonald began using knits in unusual ways and to create edgier garments, expanding the applications of the technique.

Designers, artists and hobbyists have taken this to an extreme since the turn of the century. Knit-centric, fashion-forward designers like Yan Yan and Hazar Jawabra gaining traction around the world and actively reversing preconceived attitudes. “Because it still has these stereotypes of the domestic, mundane and tedious attached to it, when those are subverted, the effect is very powerful. The art of extreme knitting has really hit people in the face,” says Sandy Black, professor at the London College of Fashion who also curated a show for the Fashion and Textile Museum called Visionary Knitwear. According to Black, knitting is often still perceived as an amateur and uncomplicated craft, and the difficulty of the skill is chronically underestimated by people both and in and out of the fashion industry. 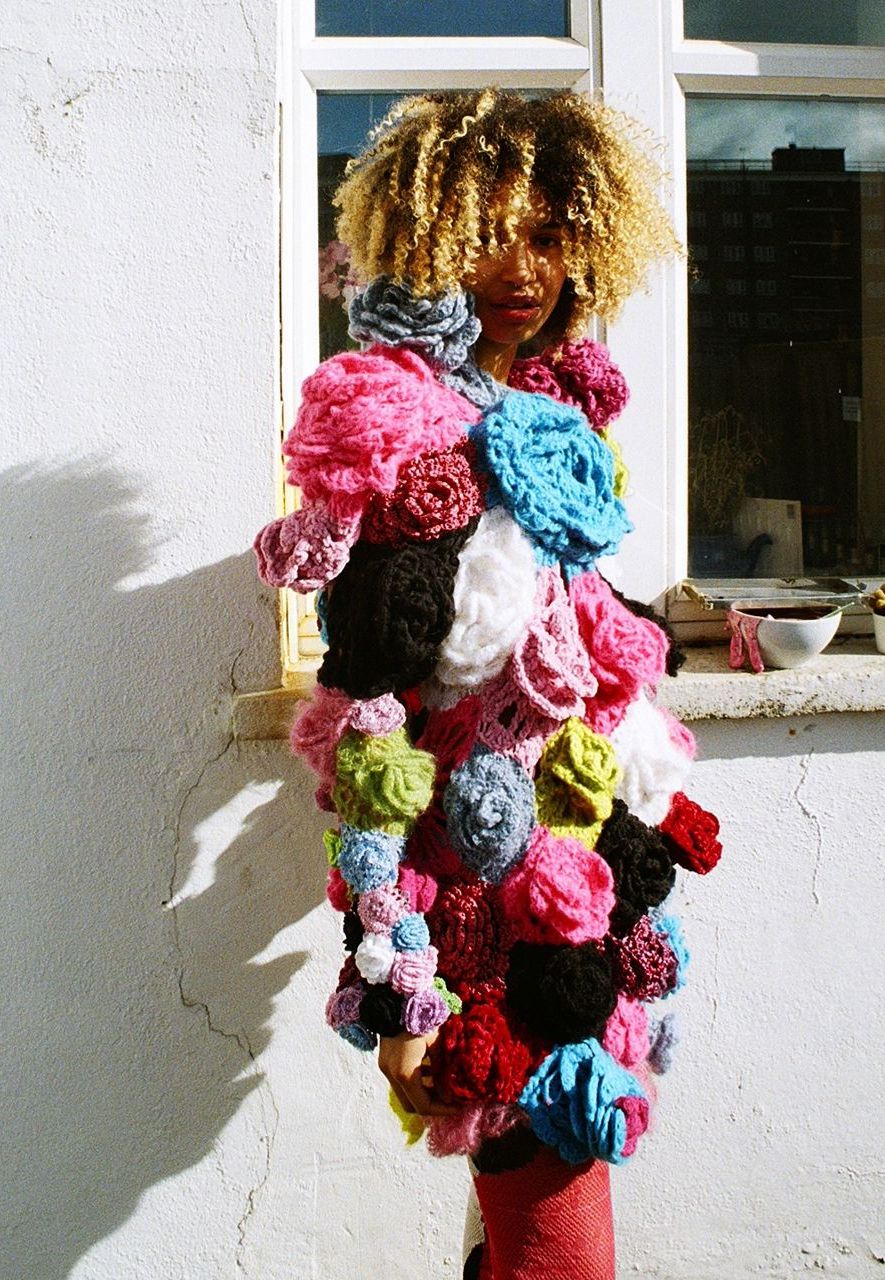 Avant-garde knitwear designer and Central Saint Martin’s graduate Katya Zelentsova is one of these ‘extreme knitters’. Her intricate works are sensual, whimsical and futuristic hybrid garments that stray far from the typical cardigan or sweater. Zelentsova says few people grasp the unique challenges of the medium. “People don’t understand you aren’t just going to the shop to get whichever fabric you want. You’re making it yourself, and that takes time.” Even at a school like CSM, the knitwear avenue is still considered a ‘niche’ pursuit. “I still get a lot of patronising remarks about knitting, mostly from men, who say things like ‘Oh so you just knit in a circle?’ The reality is that I’m operating intense machinery on a day-to-day basis. And even if I was knitting in a circle, what’s wrong with that?”

The Icelandic experimental knitwear designer Yr Johannsdottir, known for her Cubist-inspired sweaters and facemasks with protruding tongues, echoes that sentiment. She points out that our assumption that only older ladies knit, and therefore it’s an uncool and uninteresting pursuit, is rooted in more insidious biases, like ageism and sexism. “I find the stereotype has been labelled negative because people assume older women are traditional or unadventurous. But I’m sure this subtle behaviour can easily be tracked to the patriarchal society they were brought up in, a society that pushed them to act in certain ways and follow patterns,” says Johannsdottir. 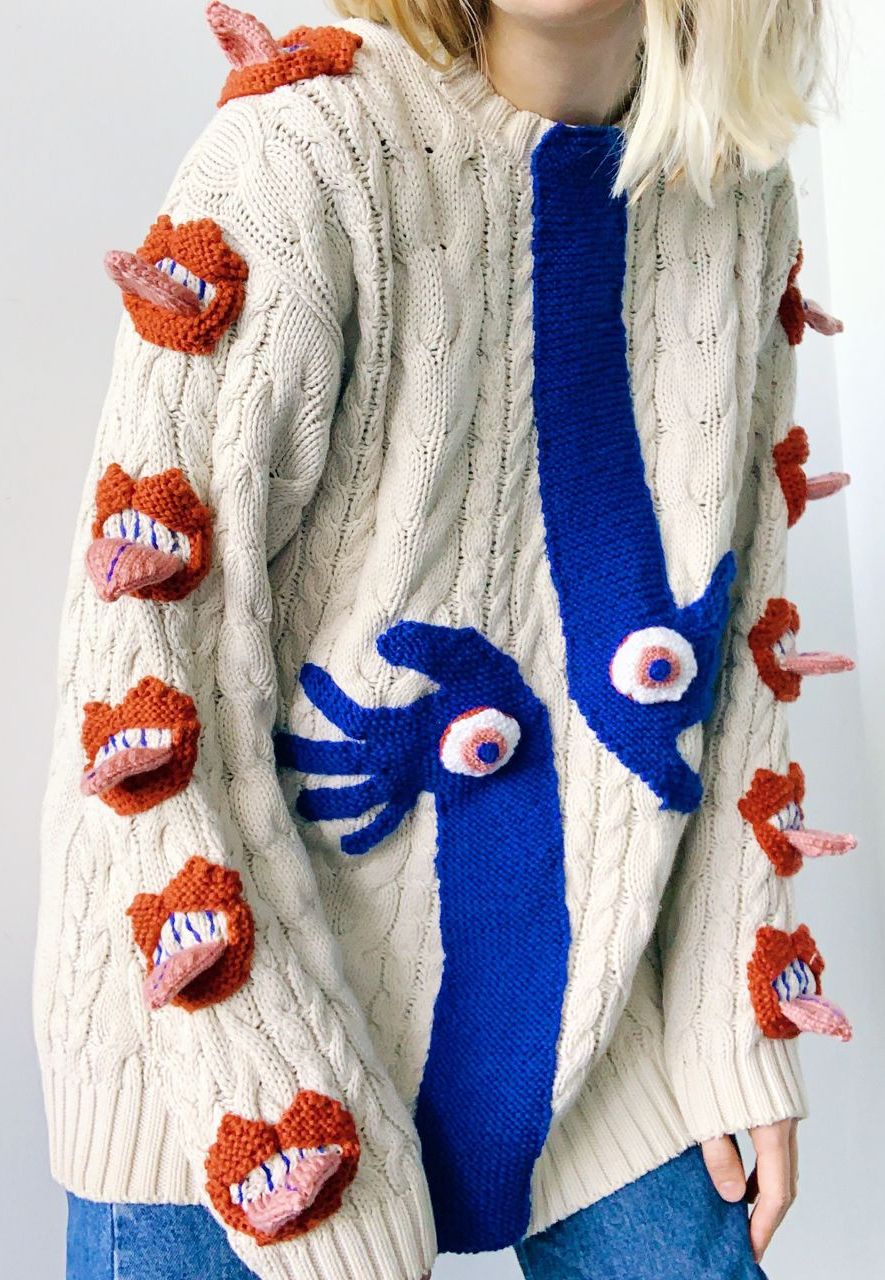 Internet forums, blogs and social media platforms have been a vital resource, not only in support of the work of extreme knitters like Zelentsova and Johannsdottir, but in introducing younger generations to the craft and to keeping the tradition alive. Lizzie Morgan, a crocheter (a technique used with one knitting needle as opposed to two) known as @GimmeKaya on Instagram, said the social media platform inspired her to take up the craft. Morgan says that the enthusiasm of the digital knitting sphere was also born of a generational commitment to combating climate change. “I think a lot of young people are waking up to how damaging the fast fashion industry is, both [to] its workers and the environment. Now, many of us are choosing to make our own clothes or shop from more sustainable brands. Our society revolves around consuming, so I think it’s both rebellious and empowering to step away from that.” Morgan is hugely grateful to the online craft community for supporting sustainable designs during a precarious financial period, and her following has tripled since the start of the pandemic.

The boom has similarly boosted millennial-focussed companies that sell knitting tools and kits. The Madrid-based company We Are Knitters reported to Vogue Business that its steady 10% annual sales growth spiked to 235% in March. The UK’s self-proclaimed “digital first” company Wool and the Gang has also seen a dramatic spike in sales because, they say, people simply have more free time to make things by hand. But knitting offers more than a sustainable way to be more self-sufficient and creative; it also benefits overall health and wellness. “Crafting is proven to reduce stress and anxiety, something we could all have a little help with right now. Sitting down to stitch can put you in an almost meditative state, we don’t say knitting is the new yoga for nothing!” says Anna Veglio-White of Wool and the Gang. 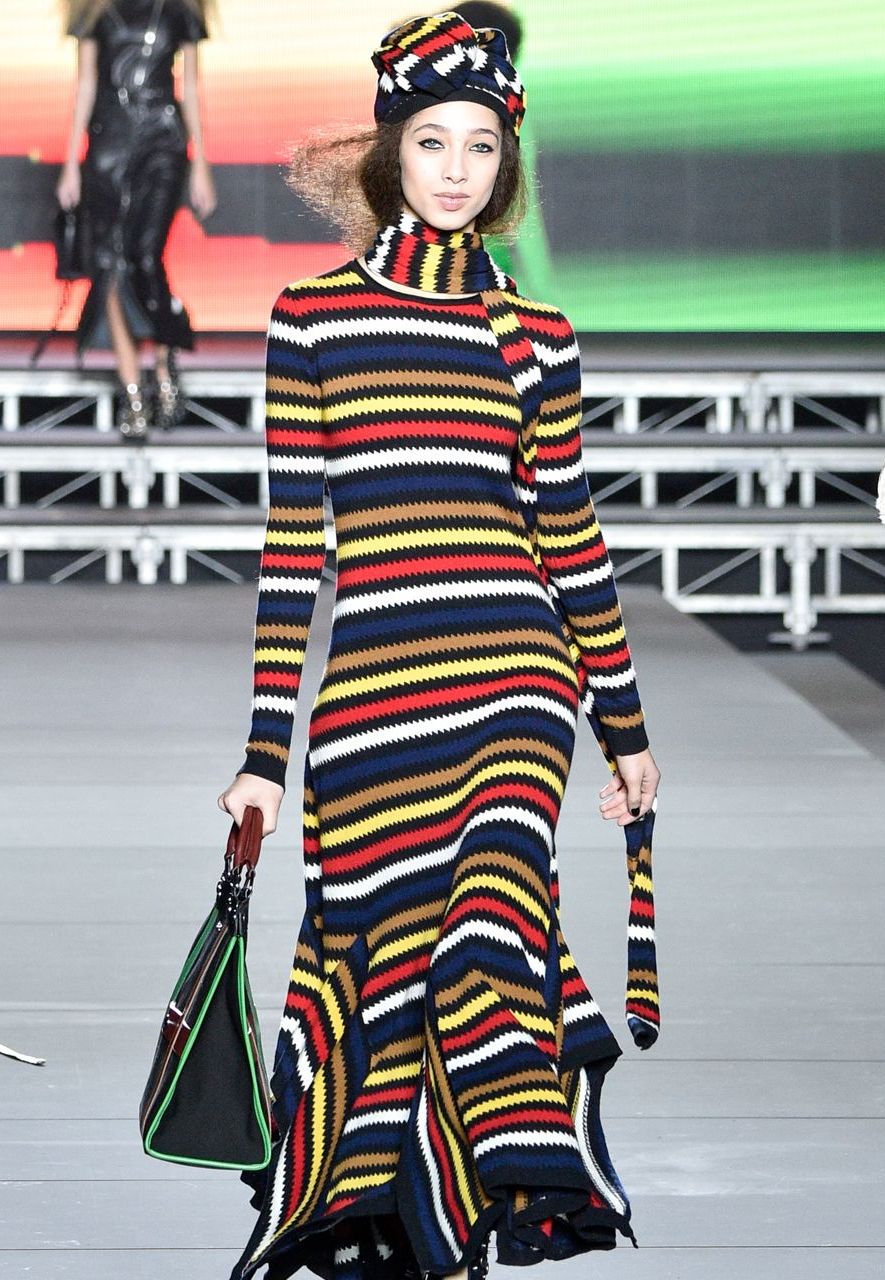 Sonia Rykiel is among the big-name designers who specialises in knitwear, as seen here at a recent Paris Fashion Week (Credit: Getty Images)

Even though knitting has boomed during periods of social isolation, it has long been a tool for community building. Sicgmone Kludje and Vea Koranteng founded Black Girl Knit Club after #diversknitty trended on social media in 2019, which promoted the visibility and recognition of more BAME people within the craft community. “We wanted to create a safe space for Black women and female creatives like ourselves to gather, share their story and inspire each other through craft skills,” say Ludje and Koreantend. And while there are plenty of knitting groups based purely on fun and socialising around the world, like the Stitch ‘n’ Bitch Groups, pub-based groups and LGBTQ-specific gatherings, knitting-based groups have also long been hotbeds of activism and progressive causes. Even though knitting circles remain the butt of many jokes, these spaces have radical implications.

So will this trend endure? As a sustainable practice that builds community, healing and even activism, all signs point to knitting only growing in popularity in the coming years, particularly as efforts to avoid the fast fashion industry increase among consumers. Creators merging age-old methods with innovative attitudes are helping reshape widespread attitudes about who knitting is for – and what it signifies. With experimental knits on the rise, perhaps one day the knitter stereotype will be that of a subversive and imaginative young creator, who has reclaimed a practice from ageist and sexist tropes.