This article appeared in Discover’s annual state of science issue as “The Virus That Changed Science.” Support our science journalism by becoming a subscriber.

In March, labs around the world went dark. Experiments stopped, specimens were frozen and research timelines shifted into the unknown. By the time labs began reopening, a new mode of science had emerged. It only took a microscopic virus to bring macro-level changes — some good, some bad and many with no signs of turning back.

The technology of the 21st century has allowed science to move forward virtually — and rapidly. The latest COVID-19 findings are shared online at warp speed, and media reports are delivered straight to smartphones in the palm of our hands. While this barrage of research fosters speedy discoveries, some scientists are concerned about the consequences of too much haste. In May, Jonathan Kimmelman, a bioethicist at McGill University, co-authored a commentary in Science highlighting the need to maintain scientific rigor in the mad rush to research during a crisis. The solution, says Kimmelman, is exceptional coordination among research teams to consolidate their efforts. Some groups conducting clinical trials are achieving this.

The RECOVERY Trial at the University of Oxford collaborates with hospitals across the U.K., while the Solidarity Trial at the World Health Organization has recruited patients in more than 20 countries. Both trials are playing a critical role in assessing the efficacy of COVID-19 treatments like dexamethasone. Yet, these efforts are so far the exception in COVID-19 science. The norm remains small-scale studies that regularly result in low-quality evidence. 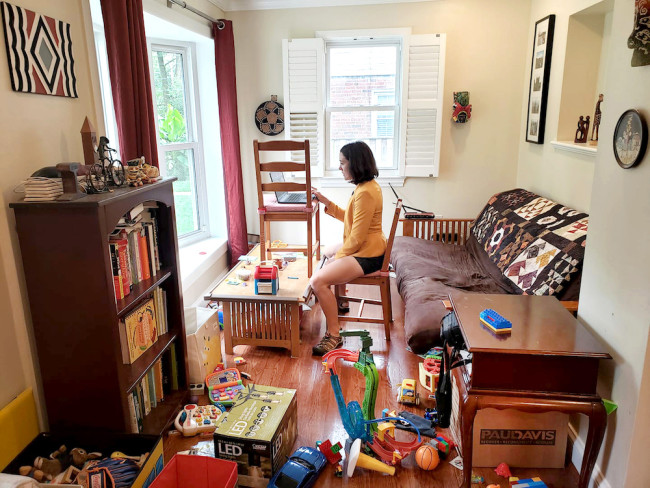 Across disciplines, researchers found ways to make their work happen. Scientists called in to CNN interviews from their living rooms. (Credit: Gretchen Goldman, Union of Concerned Scientists (@Gretchentg on Twitter)

In pre-pandemic science, the newest knowledge within a specific field was shared at annual conferences, often at a convention center in a large city. This practice often created barriers for international, early-career or low-income scientists who lacked funding to pay for travel, lodging or registration fees, as well as barriers for scientists with disabilities or young children.

In 2020, COVID-19 forced conferences to go virtual; as a result, they suddenly became much more accessible to scientists around the world. In April, the American Association for Cancer Research (AACR) became one of the first conferences to try out the virtual format. In total, 62,000 people registered from 140 different countries — more than double the amount of their in-person meetings. To improve accessibility long-term, AACR and other organizations are considering hybrid conferences after the pandemic, mixing in-person and virtual formats.

In a time of massive uncertainty, social media allowed the public to hear from and interact with scientists directly. In February, Natalie Dean, a biostatistician at the University of Florida who studies infectious diseases, started writing long Twitter threads explaining key emerging concepts related to COVID-19 models and spread. Before the pandemic, Dean says she only had about 200 followers, but quickly ballooned to over 85,000 throughout the year.

As to why she stepped up to plate, Dean says she wanted to make the science more accessible for the general public, while also providing a critical lens. “It’s difficult for the public to sort out what is good versus bad information,” Dean says. She recalls thinking, “I want to help,” and adds, “It’s linked to the urgency of the situation.”

Researchers all over the globe have united to advance knowledge on the novel coronavirus and ultimately protect humanity. Many scientists temporarily pivoted away from their original research, joining forces with immunologists and epidemiologists to offer outside-the-box perspectives. Antoni Ribas, an oncologist and cancer researcher at the University of California, Los Angeles, says that his lab and many others applied their cancer research to COVID-19 because of the parallels between the two diseases. Ribas explains that the body’s responses to SARS-CoV-2 and cancer both involve inflammatory processes that need to be decreased, plus other immune responses that need to be increased. As a result, Ribas says, many cancer researchers are repurposing cancer drugs to study their efficacy against COVID-19.

Before the pandemic, science already had a distressing diversity problem. A National Science Foundation report found that science, engineering and health faculty consisted of less than 40 percent women and 9 percent minorities in 2017. COVID-19’s closure of labs and schools overburdened scientists with greater childcare responsibilities, especially women.

One study published in eLife in June found that there were 19 percent fewer papers on COVID-19 with female first authors than there were papers published in the same journals in 2019. “If research productivity is going down for minoritized groups in science … we are looking at losing a lot of our diversity in science,” says Jessica Malisch, a physiologist at St. Mary’s College of Maryland. Malisch is the lead author on an opinion piece published in the Proceedings of the National Academy of Sciences aimed at promoting solutions for gender equity in science during COVID-19 and beyond.

One of the authors’ main suggestions was to create committees of diverse faculty members at each institution to assess the impact of the pandemic on scientific productivity, and enforce policies that protect against gender bias in hiring and promotion decisions. She says that some universities are already adopting this approach, a silver lining in the pandemic that could lead to long-lasting initiatives to support diversity in science. “Sometimes big things have to happen [to enact] change,” she says.

COVID-19’s biggest impact may have been its sobering reminder that science is a human endeavor, done by human scientists living human lives. When researchers are overly stressed by a lack of childcare or worried about the health of elderly family members, the science suffers. When there are barriers to women and minorities advancing, science misses out on crucial insights and perspectives. When science is too speedy and takes shortcuts, it may not lead to actual viable treatments. But above all, that human aspect means that when we need to create cutting-edge knowledge and suddenly solve unforeseen problems, the nature of the human spirit ensures that science will eventually prevail.