Why the apocalypse is being reimagined as a beautiful event 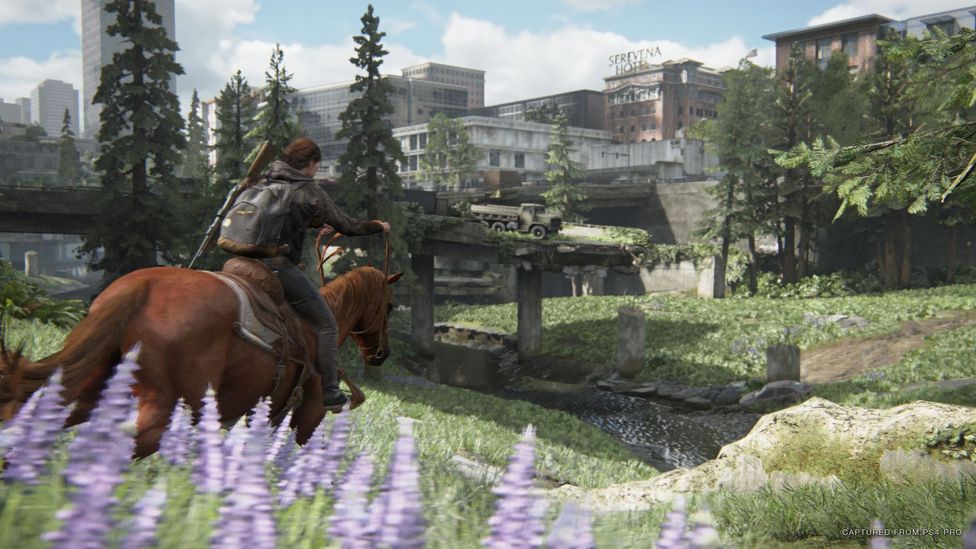 The mega-hit computer game franchise The Last of Us, Part 2 of which is released this week, is part of a wave of pop culture imagining a green and lush end-of-days, writes Al Horner.

The Last of Us may have been a zombie horror survival game, about a duo traversing a post-apocalyptic US overrun with cannibalistic creatures, but its most memorable moments weren’t daring escapes from zombie hordes, nor explosive shoot-outs with hostile human survivors. Instead, the greatest draw of the 2013 best-seller – lauded as one of the greatest video games of all time – was its quiet story beats, and one quiet story beat in particular.

– How gaming became a form of meditation

– Why does cinema ignore climate change?

– The comfort of dystopian stories

Ellie and Joel, the game’s protagonists, grizzled after an arduous, life-threatening trek in search of a cure to a pandemic that’s wiped out 60% of the planet, are climbing through an abandoned bus depot when they spot it: a wild giraffe grazing on acacia. In the distance, other giraffes roam through what used to be an inner-city baseball field, a symbol of how nature has reclaimed urban space in humanity’s absence. Acoustic guitar melodies stir. Ellie and Joel stop to caress the animal, looking out over a world rendered unrecognisable. It’s a moment of beauty amidst brutality; mankind may have been near-wiped out, but nature has carried on. 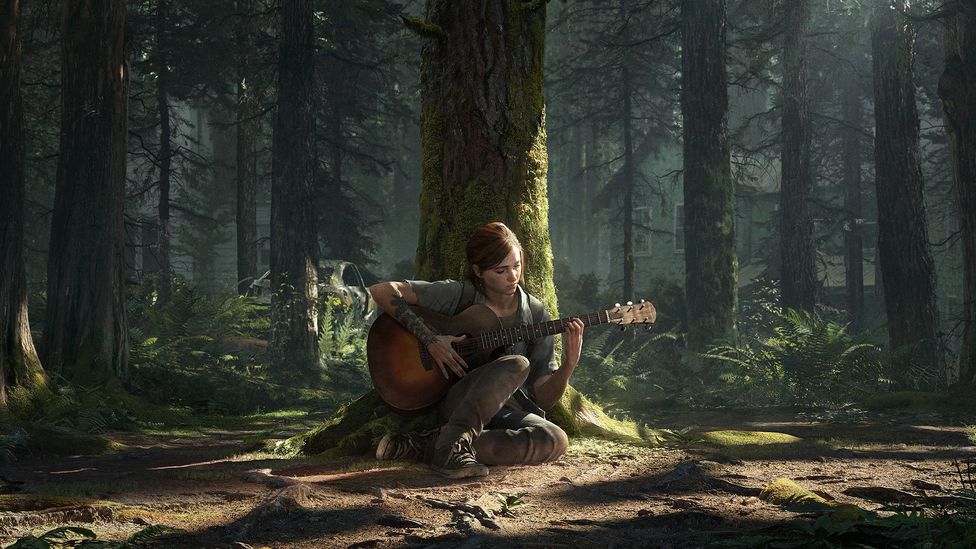 Computer game The Last of Us Part 2 continues the story of two people battling for survival in a verdant post-apocalyptic world (Credit: Sony)

In the seven years leading up to The Last of Us Part II, the game’s long-awaited sequel, released on Playstation 4 this Friday, imagery like this has begun to spread through pop culture. Dawn of the Planet of The Apes, A Quiet Place, Bird Box, Annihilation and What Still Remains are just some of the films and TV shows to have reflected on the idea of human extinction through the lens of nature, sending survivors on explorations of areas overrun by wildlife. Books like Ling Ma’s Severance have set up narratives in empty, post-pandemic cities now draped in moss and bursting with biodiversity. Even Avengers: Endgame toyed with the idea of how the world’s ecosystem would benefit from the destruction of mankind: one bright side to Thanos wiping out half of Earth’s population, Captain America tells Black Widow, is that whales now swim again in the Hudson river.

Apocalyptic movies used to take place in smouldering landscapes, full of smoky greys and scorched skies. Now they take place in luscious green spaces, where wildlife has thrived as humanity has floundered. Why is that?

Mark Digby has a theory. Digby is the art designer behind Alex Garland’s acclaimed Annihilation, a brilliant 2018 science-fiction thriller in which Natalie Portman plays a scientist investigating a mysterious, mutating natural environment that threatens to consume the entire planet. He sees this visual trend in popular culture as a manifestation of our fear of climate change. “I think we’ve hit a point where our arrogance has been called into check and we’re realising there are forces greater than what we can control: namely, nature and science,” he explains. “There’s a fear that we’re not in control of our environment anymore. This is a visualisation of how we’ve made a mistake, and now we’re anticipating the consequences.”

“There’s definitely been a wave of films over the last decade that are exploring that aesthetic and this idea, of nature and apocalypse interlocking,” agrees Charles Spano, co-writer of 2019 Netflix sci-fi IO: Last on Earth, about a young girl alone on a crumbling planet. In that film, nature is described as being “reborn” in humanity’s absence: animals and flora are seen adapting and finding new ways to survive and thrive after mankind abandons the Earth for a new settlement in the stars. The movie concludes in an unnamed, abandoned city centre in which nature has erupted around its former concrete structures. “People making films, whether it’s a little art film or The Avengers, are looking at the world and this undeniable, looming devastation. I think that seeps into our storytelling. That’s where I think this visual concept comes from, and why we’re seeing nature and beauty become a part of apocalyptic stories more and more now.”

The book that started it all

Spano, a “huge fan” of The Last of Us, looked to the same source that the game’s creator Neil Druckmann did for inspiration: a 2008 book titled The World Without Us, by journalist Alan Weisman. “An editor asked me to write a piece about what would happen if humanity just left in the blink of an eye,” Weisman tells BBC Culture. What he thought might be a story about “a world resembling an empty lot, with cockroaches scuttling across it” quickly became a story instead about how nature would respond if there were no one to oversee cities, nuclear plants, forests and more. “It was way too big for an article and became a book about places in the world like Chernobyl where, without humans there, nature was rushing in, and what we could extrapolate from that.” 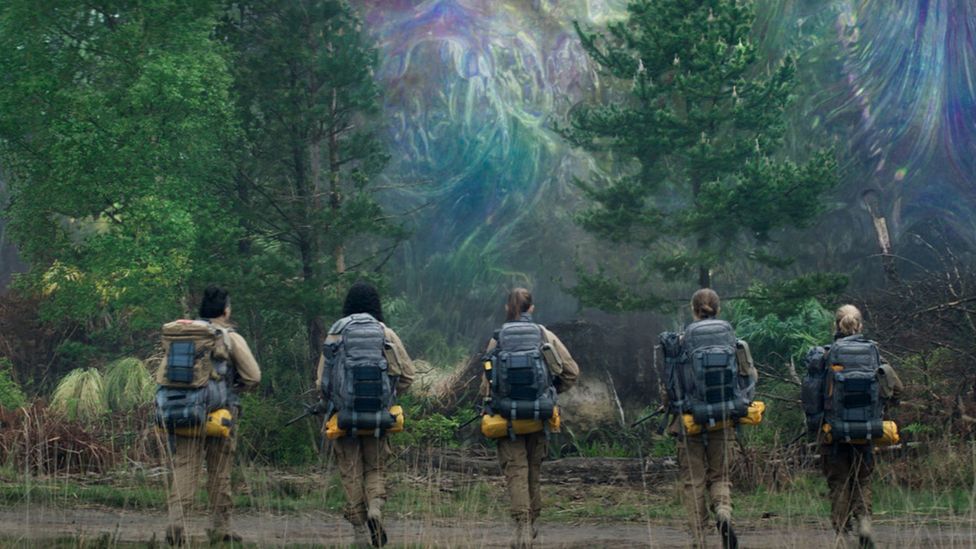 A lot of the research from The World Without Us informs the worlds of The Last of Us, IO and other ‘nature-apocalypse’ pop culture. In Weisman’s book, he discovers that without human intervention, houses would be eaten from the inside out by mould, seedlings and small organisms, gnawing away at timber. Without the man-operated mechanisms pumping water out of the New York subway system, it would flood in a matter of days, submerging streets. Tree roots would push up and eventually burst through asphalt, turning roads into strange, uneven terrain. Rusted cars would become incubators for wildlife, while fauna would sprout from every pavement crack and broken window, transforming the look of entire cities.

All of these visual touches are present in The Last of Us, as acknowledged by Druckmann in a 2013 making-of documentary. “The World Without Us describes in detail how much fighting on a daily basis we have to do to fight nature back, and once you stop doing that, how quickly nature will reclaim that space,” he says in the film. “Pretty soon you have vegetation growing everywhere and once you have vegetation, concrete breaks pretty easily.” This led to “wonderful concept art”, as lead game designer Jacob Minkoff puts it, of animals who’ve escaped from a zoo and bred over 20 years, inhabiting the land – all ideas rooted in Weisman’s research.

Weisman finds it ironic his work has seemingly become the basis for a lot of apocalyptic fiction. “I never thought of The World Without Us as an apocalyptic book, because the world doesn’t get destroyed – it gets restored,” he laughs. He curiously hadn’t heard about The Last of Us before I called, or any of the other films or pop culture titles seemingly indebted to his work (“I’m not on social media! I have to spend enough time looking into a glowing rectangle for my work”) but emails back a few days later to say he’d looked at a Last of Us clip online and decided it was “something very original and creative.”

What do these stories achieve?

With The Last of Us Part II finally here, an HBO television series adaptation of the game in the works from Chernobyl creator Craig Mazin and more films and pop culture coming out of the woodwork with a similar aesthetic, what’s clear is that the notion of a post-apocalyptic world is being reimagined in a fundamental way. This reimagining also feels unexpectedly pertinent right now, in light of the media coverage of nature creeping back into our public spaces during lockdown, with coyotes spotted on the San Francisco’s Golden Gate Bridge and wild boar wandering Barcelona’s famous Las Ramblas. 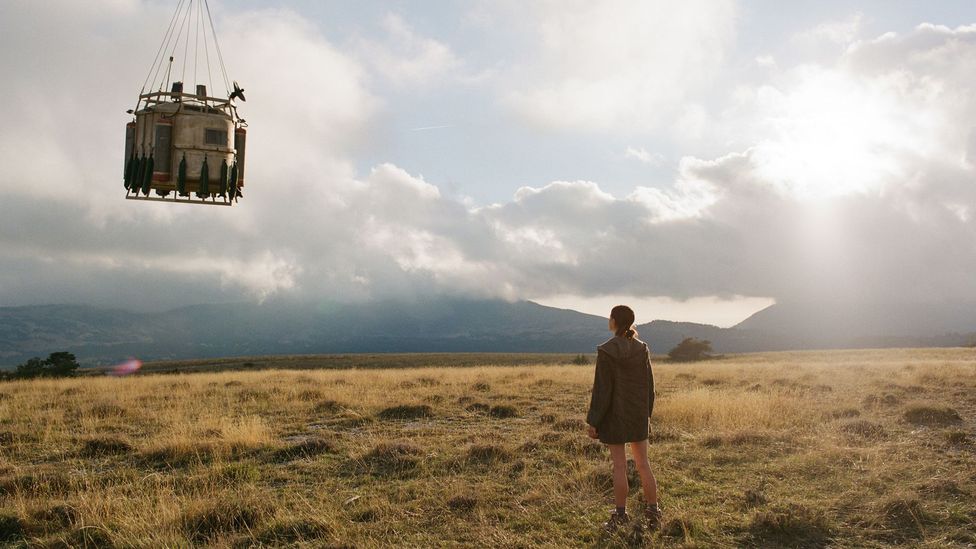 Sci-fi IO: Last on Earth is one of a number of apocalyptic works to have taken aesthetic inspiration from Alan Weisman’s non-fiction book The World Without Us (Credit: Alamy)

The rise of the ‘beautiful apocalypse’ narrative could have a resoundingly positive effect and be a useful tool in inspiring our generation to tackle climate change, says Weisman. “I hope these movies and video games plant a seed in people,” he explains, suggesting that gamers might be “learning something meaningful as they play.” The implication in these tales juxtaposing human extinction with verdant visuals is that the only thing stopping the world from flourishing are its carbon-polluting inhabitants – us. It’s a moral that those who watch and play such movies and video games might unconsciously take on board, shaping our own attitudes towards the environment and the responsibility we share in protecting it.

Looked at another way, of course, these stories could be seen as profoundly tragic: the worst possible thing that could happen to mankind, they warn, could be the best possible thing to happen to the place we call home. But whether you find the concept of an abundant but barely-populated planet devastating or strangely comforting or both, it’s a good bet that it will only become more prominent in pop culture as our anxiety around our failure to control the climate crisis grows. In other words – we haven’t seen the last of the look of The Last of Us.

6 Health Benefits Associated with CBD Oil That May Surprise You