This originally appeared in the July/August issue of Discover magazine as “Oceans Beneath Oceans.” Support our science journalism by becoming a subscriber.

Steven Jacobsen never planned on becoming a geophysicist. In fact, that might have been the furthest thing from his mind when he started college at the University of Colorado in the early 1990s, intent on majoring in music or business. But after he randomly chose a geology course to meet the school’s science requirement, he was inspired to follow a different path.

“After all those days of playing outside as a kid and picking up rocks,” Jacobsen says, “I realized that this is what I wanted to do.”

Now, he studies not just rocks, but the water hidden inside them. The more he and other researchers look, the more water they find all throughout Earth’s interior — even though it may not resemble the liquid we’re familiar with. Under the extreme temperatures and pressures existing far underground, water breaks down into its constituent elements, hydrogen and oxygen, which are chemically bound to the rock’s crystal structure. But to geophysicists, it’s still water, regardless of the form it takes.

This begs the question: How much of this water is buried beneath the surface? The answer could help explain our planet’s suitability for life and tell us how all this water got here in the first place.

Early in Jacobsen’s career, his research adviser was Joseph Smyth, a geologist who had demonstrated that a mineral called wadsleyite could, in theory, hold significant amounts of water. Wadsleyite and its relative, ringwoodite, are the two main components of the transition zone between Earth’s upper and lower mantle — about 250 to 410 miles below the surface. When he embarked on his own research in the mid-1990s, Jacobsen wanted to know: How much water might actually be stored in these abundant minerals?

Because wadsleyite and ringwoodite do not ordinarily exist on the surface, Jacobsen spent almost 15 years synthesizing them in his laboratory, simulating the high-temperature and high-pressure conditions found hundreds of miles below. He studied these lab-grown minerals to determine how fast seismic waves could pass through samples containing different amounts of water — information he’d later use to assess the water content of underground rock. 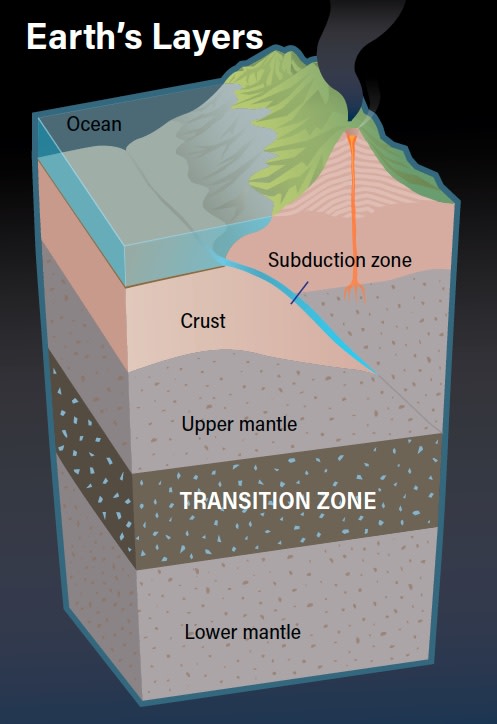 Geophysicists are finding more and more water deep under Earth’s surface, especially in the transition zone, which is full of waterbearing minerals. (Credit: Jay Smith)

He confirmed that the minerals could indeed contain appreciable amounts of water elements, incorporated within the rocks’ structure “like water or milk that’s baked into a cake.” But because his estimates were so much higher than most experts considered plausible, he was hesitant to publish his results until he had more confidence in them.

Everything changed in 2014 when Graham Pearson of the University of Alberta reported on his investigation of a tiny diamond recovered from Brazil. Formed in the transition zone, the diamond had an even tinier bit of ringwoodite trapped inside. And in that ringwoodite? About 1 percent water by weight.

That may not sound like much, but given the mineral’s ubiquity in the transition zone, Jacobsen knew: It could add up to a lot of H2O.

Meanwhile, Jacobsen’s experiments revealed that the presence of water in ringwoodite would lower the melting point of rock at the base of the transition zone. That means the water-bearing rock there is more likely to contain liquid patches — not because it’s wet, but because parts of it are molten. Around the same time, Jacobsen, by then at his current position at Northwestern University, teamed up with University of New Mexico geophysicist Brandon Schmandt. Schmandt had been surveying the mantle with the USArray, which includes a network of 400 portable seismographs. “If there’s that much water in the mantle,” Jacobsen told Schmandt, “there must be melts” — bits of magma mixed in among solid rock.

Pooling their data, the researchers identified extensive stretches of molten material within the transition zone and just below it — findings that were published three months after Pearson’s diamond discovery. By then it was becoming increasingly clear, Jacobsen concluded, that “the transition zone is full of water.”

How much water? If the ringwoodite sample is representative, it would mean there’s about twice as much water as in all Earth’s surface oceans, he says. Just one of these “ocean masses” equates to about 1.5 billion billion tons (or over 350 billion billion gallons).

And the case is far from being closed: Signs of additional water have since been found both above and below the transition zone. In 2016, Jacobsen, this time working alongside Pearson, obtained another diamond from the Brazilian depths. This stone was produced more than 600 miles down in the lower mantle, and then rocketed to the surface in a volcanic eruption about 90 million years ago.

Instead of ringwoodite, this diamond had a defect consisting of ferropericlase — one of the lower mantle’s main constituents. The ferropericlase contained just a fraction of a percent water by weight. But given the size of the lower mantle, comprising half the planet’s total mass, Jacobsen believes it could hold perhaps another ocean mass of water, distributed among this layer’s rocks.

All that water below Earth’s surface isn’t just sitting still: It’s cycling, pulled along as tectonic plates move. A big announcement came in 2018 from Doug Wiens and his colleagues at Washington University in St. Louis who’d been monitoring the Mariana Trench — a trough that includes the oceans’ lowest point, about 36,000 feet deep. There, the Pacific plate plunges far beneath the neighboring Philippine Sea plate through a process called subduction, carrying vast quantities of absorbed water with it to the upper mantle.

Wiens’ team used a network of 20 ocean-bottom seismographs to measure the water content of underlying mantle rock, and found that the quantity of water deposited 60 to 100 miles below the seafloor was more than four times above earlier estimates. Extending their results to all the world’s subduction zones suggests that seawater inputs to the mantle are something like one ocean mass of water, says Jacobsen.

“We have one ocean mass in the oceans, another in the upper mantle,” explains Jacobsen. “Let’s suppose there are two more in the transition zone.” There could be roughly another ocean mass in the crust and lower mantle combined, he estimates, “making five ocean masses altogether.” And that tally doesn’t even consider our planet’s core, which may harbor additional water components, though that innermost region is hard to access with current technology.

“That is something for future generations to sort out,” Jacobsen says. “But now that we’ve seen a black hole, anything is possible.”

Water — What Is It Good For?

Deducing the number of hidden oceans is more than just a numbers game. “Water is as crucial to the workings of the Earth’s interior as it is to Earth’s surface processes,” notes Columbia University geophysicist Donna Shillington in a 2018 article.

Earlier in his career, Jacobsen didn’t concern himself with where Earth’s water came from — a question, he says, that’s been “discussed in all the major religious texts, including the Quran and Old Testament.” But as estimates of subterranean water grew, he started looking more closely at the rates at which water can be carried to great depths via plate tectonics and subduction. His calculations show that it could take billions of years, roughly the age of our planet, to move water from the oceans to the mantle.

For that reason, Jacobsen questions the conclusion many astronomers have embraced: namely, that most of Earth’s water was delivered to the surface by asteroids and comets. Instead, he believes that substantial quantities must have been here since the planet’s formation and that much of the water in our current oceans was “squeezed out” from rocks below.

“What’s cool about the whole story is that we used to look to outer space when pondering the origins of Earth’s water,” Jacobsen says. “But as we gaze deep inside the planet, a thousand or more kilometers down, we’re finding clues from within about the sources of this precious fluid.”

Steve Nadis, a contributing editor to Discover, plays handball and volleyball in Cambridge, Massachusetts, where he lives with his wife, two daughters and an unruly dog.