A new exhibition explores how John Heartfield’s powerful photomontages waged a war on the lies and propaganda of Hitler’s Germany.

In a striking photomontage from 1929, the artist John Heartfield stares forcefully at his viewers while cutting off the head of Berlin’s police chief, Karl Zorgiebel, with a large pair of scissors. “Use photo as a weapon!”, the title of the image implores. In this case it was wishful thinking about a man who had ordered the brutal beating of protesting workers. But Heartfield would indeed turn his photomontages into powerful weapons, and against a far more formidable foe: Adolf Hitler. In the years leading up to World War Two, and as the National Socialists attempted to manipulate public opinion with their powerful propaganda machine, Heartfield exposed the truth behind their lies with his ingeniously crafted images and became one of the most important and innovative artists in the fight against Fascism.

– The images inspired by protest

– How a painting fought Fascism

Born Helmut Herzfeld in 1891, Heartfield originally trained in advertising but the senseless destruction of World War One radicalised him both politically and aesthetically. He adapted the anglicised version of his name in defiance of the anti-English sentiment then sweeping through Germany. And he began experimenting with the perception-altering powers of photomontage together with his friend, the artist George Grosz, in 1916. The art form – where two or more photos are combined to create new images – would become central to their practice within Berlin Dada. The pair joined the art movement in 1917, where they would meet fellow photomontage artist Hannah Hoch. 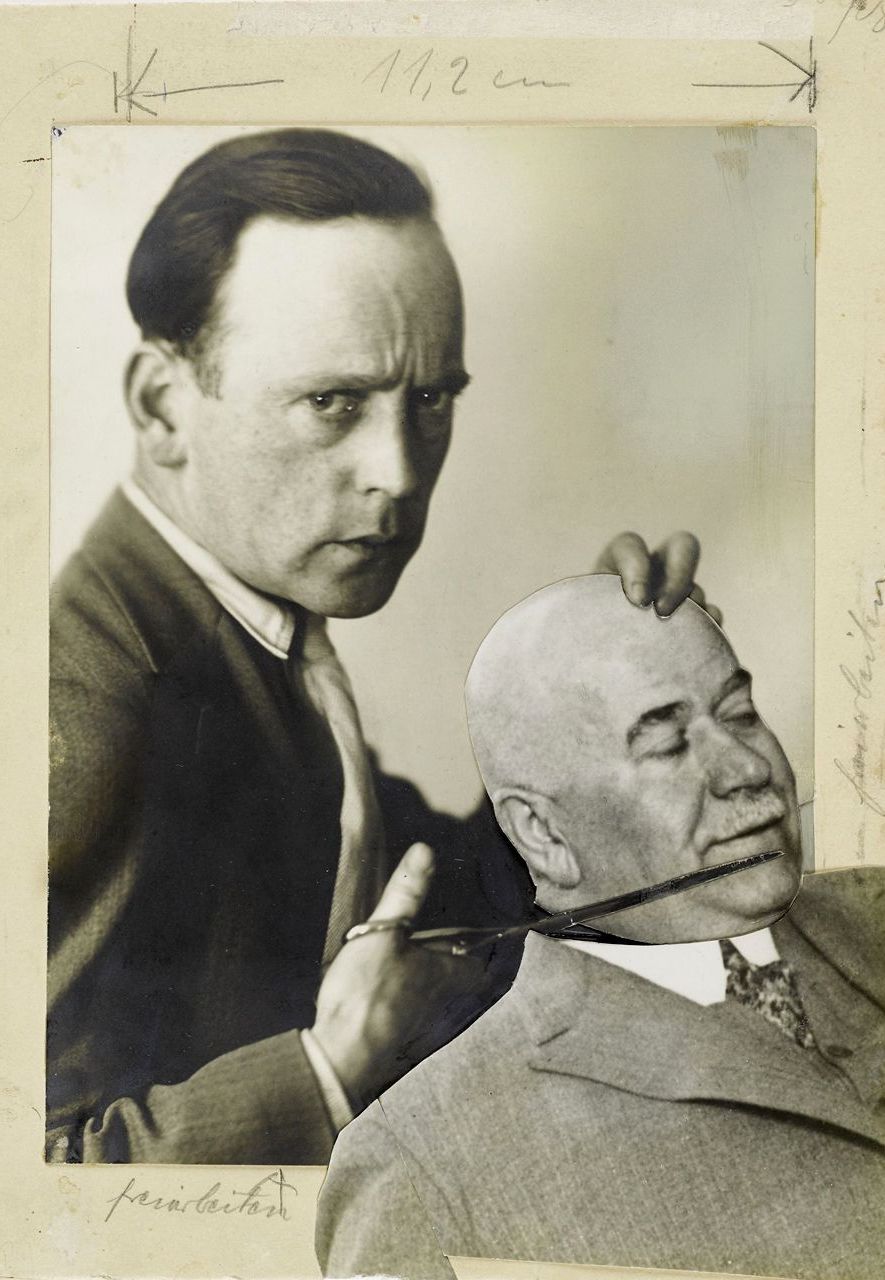 Use Photo as a Weapon! (1929) sees the artist cutting off the head of the Berlin police chief (Credit: Akademie der Kunste)

Dada encouraged a deliberately confrontational and explosive approach to composition, but once Heartfield left the group he learned to fine tune the number of elements in his work to create a greater impact. His designs reached a particularly high level of sophistication while working in the propaganda department of the German Communist Party (KPD), which he had enthusiastically joined in 1918. It was here that he created his iconic election poster Five Fingers Has the Hand (1928). The image cleverly suggests the power of the worker to grasp the enemy, while also alluding to the number that the Communist Party had been given in the upcoming Reichstag elections ballot.

“I think that was just a stroke of genius,” says Anna Schultz, co-curator of John Heartfield: Photography Plus Dynamite, currently showing at the Akademie der Kunste in Berlin. “You can see that he knew about advertising. He had a gripping image and a good slogan.” 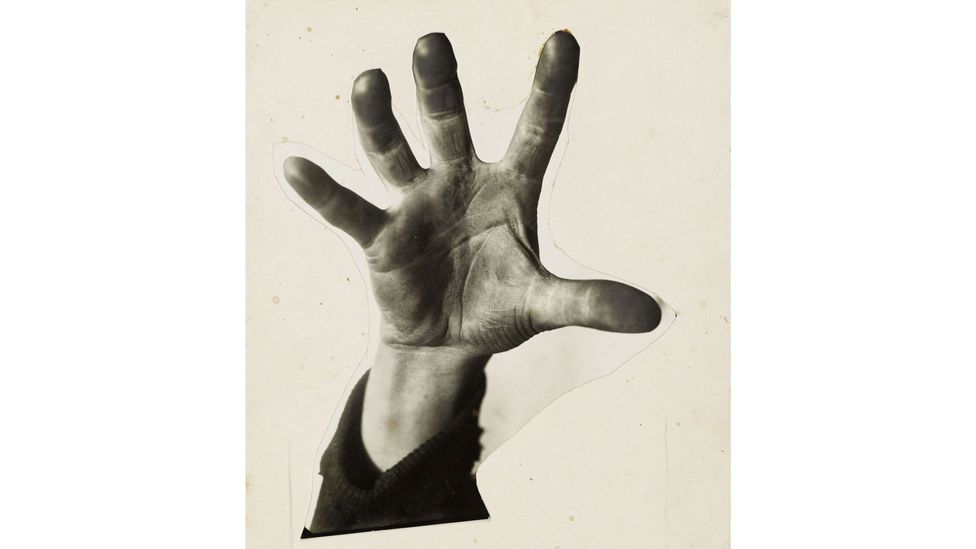 However, despite the poster’s positive impact on the election result, its innovative design fell foul of some in the party leadership who considered anything remotely abstract to be decadent. Ultimately, frictions over the nature of his work made it impossible for Heartfield to keep working for the KPD.

He was, however, welcomed with open arms by Die Arbeiter-Illustrierte-Zeitung (The Worker’s Illustrated Magazine) or AIZ for short. A mass-market periodical on the left of the Weimar Republic’s polarised political spectrum, it proved to be the perfect medium for Heartfield to take aim at the National Socialists.

Although vast swathes of the German population were in thrall to the Nazi’s powerful propaganda machine, Heartfield, as a fervent pacifist and anti-capitalist, remained resolutely immune. “I think he just saw through it,” says Schultz. “He understood very quickly what their aims and goals were. They called themselves National Socialist but there was never anything socialist about them.”

Armed with nothing more than paper, scissors and glue, Heartfield was soon waging a viscerally effective war against their lies and hypocrisy. “He shows how fickle they are,” says Schultz. “There’s this montage called Mimicry where you see Goebbels putting a Marx beard on Hitler in order to attract more working-class votes.” 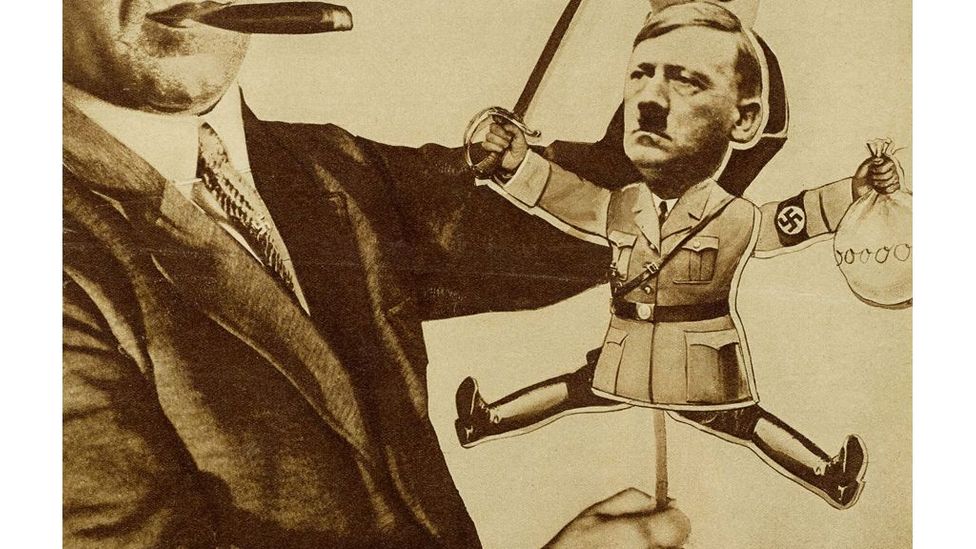 In the image Tool in God’s Hand? Toy in Thyssen’s Hand! Hitler is the puppet of businessman Fritz Thyssen (Credit: Akademie der Kunste)

The Nazi party being in the pocket of industry was a particular bugbear of Heartfield’s and he revelled in using their own propaganda against them to make his point, particularly if it involved puncturing Hitler’s egotistical idea of himself as an Ubermensch (superman). In his photomontage Adolf the Superman: Swallows Gold and Spouts Junk (1932), Heartfield placed a widely publicised photograph of Hitler at a rally on top of an X-rayed torso. The spine is made from the coins business leaders have thrown into Hitler’s gaping mouth to make him spout the warmongering lies that will bring them profit.

Elsewhere the dictator is literally brought down to size and parodied as a sword-wielding puppet in the hands of the cigar-smoking businessman Fritz Thyssen, his splayed legs and arms rendering his proud expression ridiculous.

“What I find interesting is the way he manipulates the images,” says Schultz. “Nowadays it’s difficult to tell if an image has been tampered with but with Heartfield it’s a very different process. It’s not about masking the work that he’s done. He said it’s about showing the truth behind the image by making the lie obvious. The idea is that the viewer looks at the image, sees that something has been altered and asks, ‘What is the reality behind it?’,” she explains. 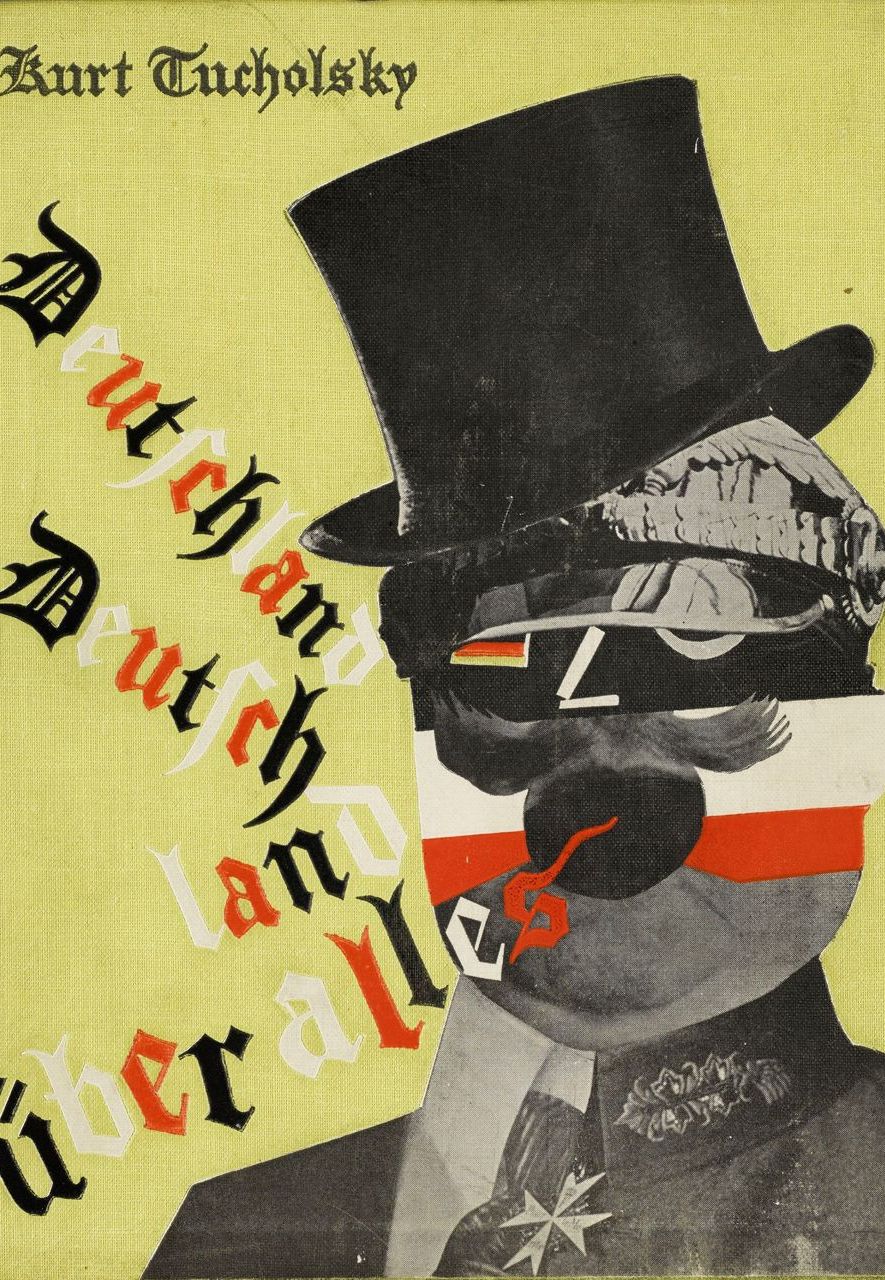 Heartfield’s images, such as Deutschland, Deutschland uber alles, satirised the German population, which was largely in thrall to the Nazis (Credit: Akademie der Kunste)

In our own image-saturated world, it is perhaps difficult to understand the impact Heartfield’s work would have had – but Schultz says there is no doubt that it was “huge”. AIZ, on which his photomontages regularly graced the cover, had an estimated circulation of around 250,000 at its peak and would be seen on newsstands even by those who didn’t buy the magazine. Heartfield also created posters that were prominently displayed around Berlin.

Much to their fury, the Nazis found themselves adding to Heartfield’s audience by publishing an article denouncing his work, only to find people buying the magazine because they were intrigued by the photomontages included within. “It was of course a huge triumph for Heartfield that the Nazis spread his works,” laughs Schultz.

Unsurprisingly when Hitler assumed power in January 1933, Heartfield soon found himself on the Nazis’ hit list. His flat was raided and he only narrowly evaded capture by escaping though a window and fleeing across the border into what was then Czechoslovakia.

Fortunately AIZ, later renamed Die Volks-Illustrierte, or VI, was able to keep publishing in Prague, albeit with a much-reduced print run. His power to get under the skin of the Nazis, even in exile, was evident when the German Embassy pressured the Manes Association of Fine Arts to remove Heartfield’s photomontages from an international exhibition of caricature. Heartfield responded brilliantly by creating a single image from those that were banned and placing it on the cover of ZI, turning the affair into a cause celebre.

However, when the Munich Pact, which effectively handed Czechoslovakia over to Hitler, made Heartfield’s position in Prague untenable he was forced to flee again, this time to London. There, artistic opportunities were slim and his work did not have the impact he no doubt would have liked. 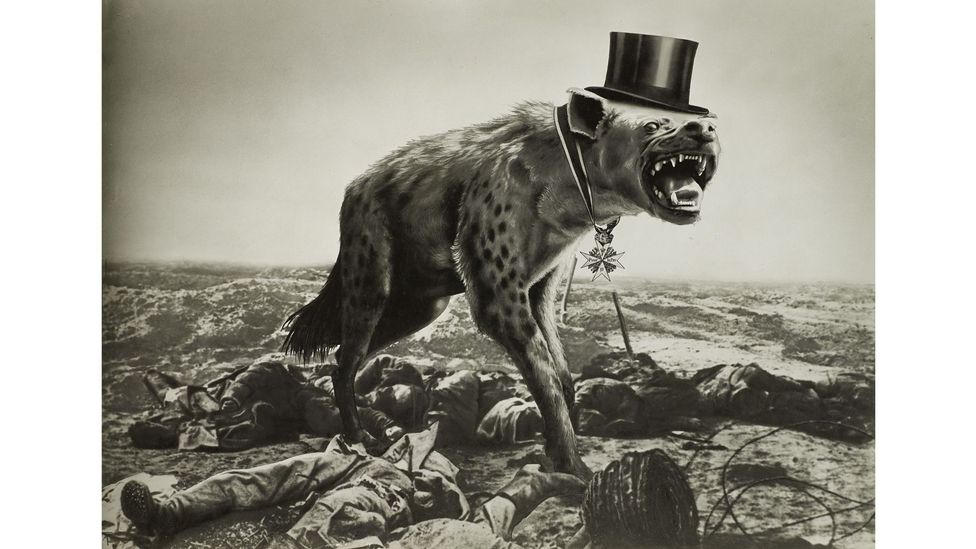 Heartfield’s work, such as War and Corpses – The Last Hope of the Rich, made him an enemy of the state, and he fled to Prague and then London (Credit: Akademie der Kunste)

Eventually Heartfield found work in a London publishing house and did not return to what was then the GDR until 1950. His belated return and concerns over the nature of his work led to him to be expelled from the Communist Party and denied employment. “I would have been the designer of socialism if only they’d let me,” he later bemoaned. Although eventually rehabilitated and granted membership of the Akademie der Kunste, one can only concur that it was socialism’s loss.

As nationalism once again rears its ugly head throughout Europe and the world, and photo manipulation is available to anyone with a smartphone, perhaps Heartfield’s ingenious manner of exposing lies could offer inspiration to a new generation of artists. And even if they don’t, his iconic images that highlighted the pointless brutality of war and the power of collective resistance remain as powerful and relevant as ever.

John Heartfield: Photography Plus Dynamite will be travelling to the Museum de Fundatie, Zwolle, from 17 January – 3 May 2021 and The Royal Academy, London, 27 June – 26 September 2021.

A virtual tour of the exhibition, which is open until 23 August, can be found at www.adk.de/heartfield