We think of mass extinctions as brief moments of havoc — profoundly devastating but over within a geologic instant. The Devonian, the second of the so-called “Big Five,” defies this notion. If the other great die-offs are short stories of death and destruction, this one is an epic akin to War and Peace. Even that paradoxical title seems fitting: The Devonian extinction ravaged Earth on and off for 25 million years, and although it ultimately killed three-quarters of all species, it also cleared the way for a new balance of animal life that endures to this day.

The extinction began roughly 380 million years ago, midway through the segment of geologic time known as the Devonian period, or the age of fish. (Vertebrates hadn’t yet made the leap onto land.) The prehistoric waters teemed not with the likes of tuna, sardines and salmon, but with their bizarre, long-dead predecessors. At the top of the food chain sat the placoderms, a race of heavily-armored and sometimes massive fish. The most famous of these mean-mugging beasts, Dunkleosteus, may have grown as long as 30 feet, probably winning it the distinction of largest animal — until the dinosaurs. 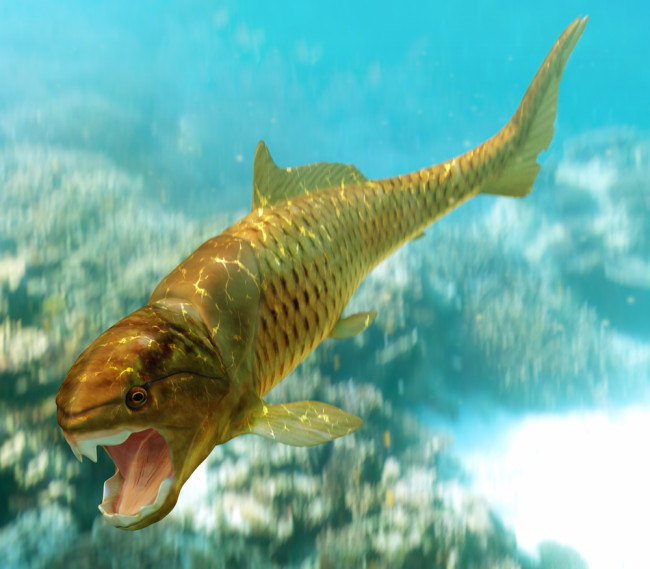 An illustration of the enormous extinct prehistoric fish Dunkleosteus swimming in search of food within a Devonian Sea. (Credit: AuntSpray/Shutterstock)

But for all their might, Dunkleosteus and its kin wouldn’t survive the age that bears their name. “A series of crises piled up to affect life on Earth,” says Michael Coates, a biologist at the University of Chicago. Annihilation crept in, and slowly swept away the dominant Devonian species. This opened ecological niches to a new cast of organisms — no less than, in Coates’ words, “the signature of modern vertebrate life on the planet.”

In terms of its time scale, “the Devonian extinction is quite different from the others,” says University of Cincinnati geologist Thomas Algeo. Over the course of millions of years, as many as 10 distinct events raised the loss of biodiversity above the normal background rate, or baseline. Two, however, stand out: the Kellwasser and Hangenberg events, which occurred in the middle of and at the end of the Devonian period, respectively.

Clear-cut answers are rare in the realm of extinction, but researchers broadly agree that both events were accompanied by widespread ocean anoxia, or low oxygen levels. Some of the best evidence is found in the layers of black shale — which form under anoxic conditions — that date to the time. It’s likely, then, that one of the major kill mechanisms throughout the Devonian period was asphyxiation. Along with the armored fish, reef-builders like corals and sponges died en masse, as did trilobites, nautilus-like goniatites and many more creatures.

It’s more difficult to say why the oceans suddenly became unbreathable for them. Volcanic activity is a perennial suspect in extinction investigations, and scientists have duly scoured the rock record for traces of it in the Devonian extinction. “There’s been a lot of searching for a plausible candidate,” Algeo says. Nothing has been found yet to compare with the monstrous eruptions of the later Permian extinction, but some evidence does suggest that volcanism in a large igneous province called the Viluy Traps may have played a role, including, perhaps, via mercury poisoning. An asteroid also struck Earth during this period, leaving behind the 40-mile-wide Siljan crater.

One recent study concluded that the trigger for the Hangenberg event was ultraviolet radiation, penetrating the atmosphere through a break in the ozone layer. The researchers collected Devonian rock samples from mountains in Greenland and the Andes, and, after dissolving them, found malformed plant spores consistent with DNA damage from UV exposure.

Life Turns on Itself

Algeo has his own, astounding theory: Death came not from geologic or climatic processes, but as a “natural consequence of the evolution of the whole biosphere.” In other words, the enemy of Devonian life was life itself. He believes that as vascular plants — basically everything except moss and lichen — first colonized dry ground, their deep roots broke up Earth’s surface rocks, releasing nutrients and minerals that fueled algal blooms. This left the oceans riddled with dead zones devoid of oxygen. While the plants thrived, the rest died.

Plants also absorb carbon dioxide, or CO2, the atmosphere-warming greenhouse gas. As they spread, they could have chilled the planet, bringing on an ice age that would have made life even less sustainable. (Indeed, some research suggests global cooling was involved in the Devonian extinction, disproportionately affecting tropical species.) Over the long term, though, the greatest legacy of this newfangled vegetation may lie in the extinction’s rebound.

Whether or not the vascular plants were to blame for the extinction, they were undoubtedly pervasive by the end of it, with trees and ferns forming the first modern forests. The above-water world had finally grown complex enough to support a menagerie of animal life, and sea-faring species took notice. “Everyone’s looking at that, and there’s stuff to exploit,” Coates says. “They’ve suddenly got this golden opportunity.”

The tetrapods, our oldest terrestrial ancestors, abandoned the ocean for this new environment. Every single vertebrate that has walked the Earth since is a descendent of these primitive, four-legged landlubbers: “grotesque amphibians slumping around in swamps,” Coates calls them, half-jokingly.

A drawing of Elginerpeton pancheni, an early tetrapod from the Late Devonian period. (Credit: Nobu Tamura/CC by 3.0/Wikimedia Commons)

After the Devonian extinction ended, around 360 million years ago, Romer’s gap began. This void in the fossil record, named for Harvard professor Alfred Sherwood Romer, puzzled scientists for decades. Most significantly, it thwarted attempts to piece together the improbable history of the first land animals whose lineage eventually leads to us. For the most part, tetrapods were bit players before the extinction: a few weird, lungfish hybrids like acanthostega, sprouting half-hearted limbs where they should have had fins. They certainly didn’t look like they were only an evolutionary hop, skip and jump from world domination.

But after Romer’s gap, “when you pick them up again,” Coates says, “they’re diverse and doing all sorts of exciting things.” Lumbering amphibians are suddenly walking on land, and steadily improving at it. One of the most famous specimens is ichthyostega, a meter-long creature that’s a bit reminiscent of the Chinese giant salamander. In another few million years, the amphibians diverge from the shelled-egg-laying reptiles, which themselves later give rise to the dinosaurs and mammals.

The Devonian extinction ushered in not only the land-bound tetrapods, but also the animals that command the marine vertebrate world to this day: ray-finned (or bony) fish, and cartilaginous fish, like sharks, rays and chimeras. Though we see ourselves in the tetrapods, the progeny of post-Devonian fish is, in its own way, even more impressive — today’s marine vertebrates (including the bristlemouth, likely the most abundant vertebrate on Earth) far outweigh their dry-ground cousins. If a Martian biologist were to select one vertebrate at random from our planet, Coates says, “chances are it would be something like a herring.”

It’s not clear to what extent the Devonian extinction actually altered the flow of evolution. Maybe the tetrapods, sharks and bony fish would have outcompeted their rivals anyway. According to Algeo, the extinction “probably served mostly to finish off these groups that were already not doing well.” Still, it was the extinction that finished them off, yielding the ecological floor decisively to the forms of life we see today. As Coates put it, “the modern vertebrate biota is the product of this big editing event.” In no small sense, we may have the Devonian extinction to thank for our existence.