Velazquez’s Las Meninas: A detail that decodes a masterpiece 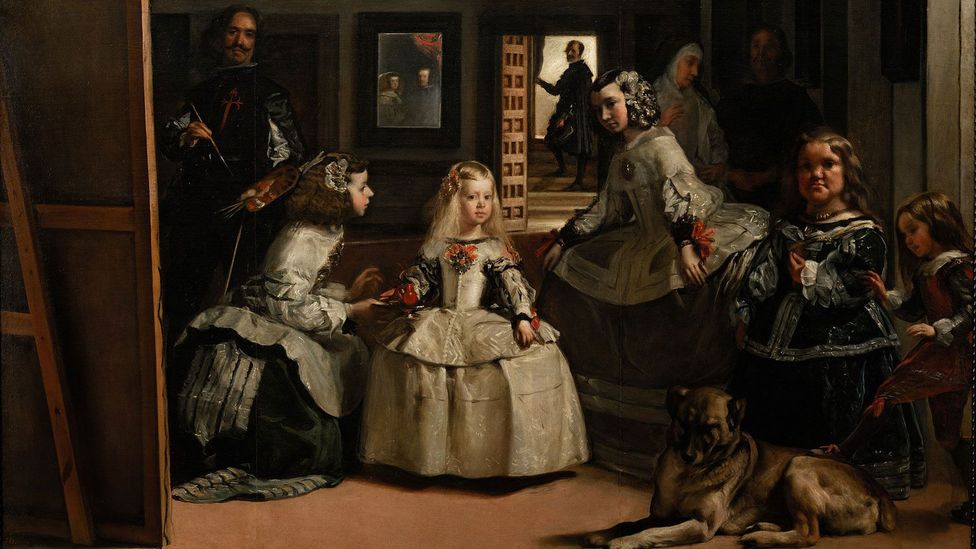 Sometimes a vase is just a vase. Sometimes it’s a portal to another plane of perception. In Diego Velazquez’s 17th-Century masterpiece Las Meninas, a ricochet of shadows and mirrors that never ceases to intrigue, a small and underappreciated clay jug at the centre of the canvas transforms the work from a disorderly snapshot of courtly life into an arresting treatise on the illusory and ultimately transcendable nature of existence. Erase that easily overlooked earthenware object from the heart of the Spanish Golden Age painting, and its mysterious pulse, which has captivated the attention of observers for more than three and a half centuries since Velazquez created the painting in 1656, withers to a whisper and stops.

More like this:
– The fresco with multiple identities
– The secret toilet humour in a Titian painting
– The tragedy of art’s greatest supermodel

To appreciate fully how the seemingly incidental presence of a ceramic folk craft from Latin America – when polished into pertinence by Velazquez’s virtuoso brush- becomes a visionary lens through which we glimpse the world anew, we must first remind ourselves of the cultural context from which the painting emerged and what it purports to portray. On one significant level, the work provides a self-portrait of the 57-year-old artist four years before his death in 1600, after he had spent more than three decades as court painter to King Philip IV of Spain. Palette in hand on the left side of the painting, Velazquez’s life-size selfie stares our way as if we were the very subject that he is busy capturing on an enormous canvas that rises in front of him – a painting-within-a-painting whose imaginary surface we cannot see.

The dimly lit chamber in the Royal Palace in Madrid in which Velazquez is suspended between brushstrokes is abuzz with the seemingly unchoreographed bustle of a motley crew of courtly players. In the centre foreground of the picture, to Velasquez’s left, we see the five-year-old Infanta Margaret Theresa, daughter of King Philip IV of Spain and Mariana of Austria, flanked by a pair of female attendants – the eponymous ‘ladies in waiting’. On the right side of the painting, a large and lounging mastiff endures the taunting toes of a playful young dwarf, beside whom an older female dwarf gazes out at us, reinforcing the feeling that the painting is watching our every move as closely as we are watching it. Behind the two dwarves, the Infanta’s chaperone, dressed for mourning, quietly confides to a bodyguard, whose thoughts appear to be drifting as she speaks.

Through an open door in the back of the painting, a hazily articulated figure, the queen’s chamberlain, is departing the realm of the painting, but not before pausing to glance back at us, as if anxious that we might be following him to the unknown that lies beyond. To the left of that doorway, a mirror reflects the wraith-like faces of the king and queen, whose physical whereabouts in the world of the work are otherwise unaccounted for. They’re there but not there. It is these last two aspects of the work – the open doorway through which the chamberlain is endlessly exiting to an elsewhere outside the consciousness of the canvas, and the gauzy shimmer of the royal countenances in the ghostly glass of the mirror – that have provoked observers of the painting to suspect that there is more at play than meets the eye. 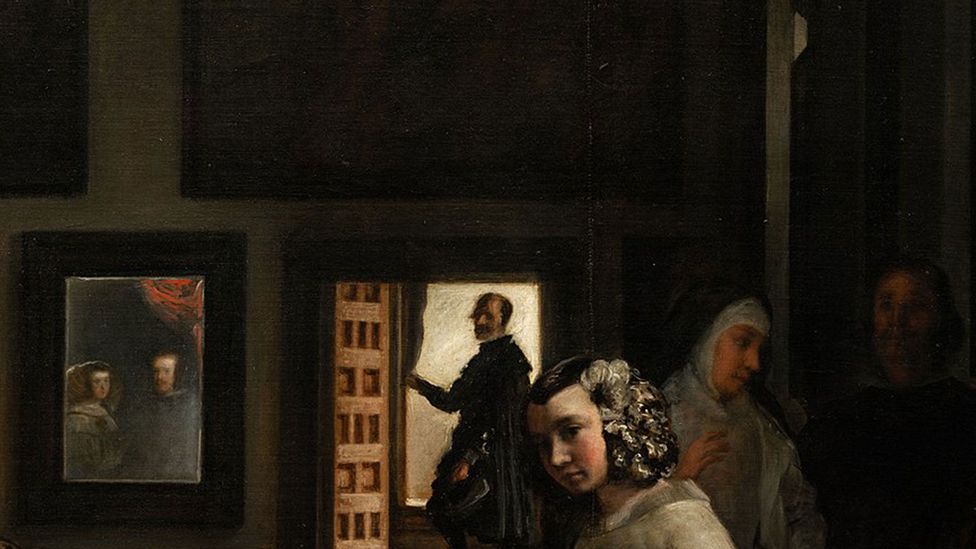 The absent presence of the king and queen (who are simultaneously in the painting but not in the scene) forces us to conclude that this is as much a philosophical work about the substance of substance and the hereness of here as it is a fleeting freeze-frame of lively palace life. The riddle of their reflection ensures we are not passive onlookers but actively seek to understand where in the world they are. Does the mirror position them where we are, on the outside looking in, the very subjects of a portrait that Velazquez is at some stage of beginning or finishing? Or is the mirror revealing what is already on that large canvas whose back is turned to us: an imaginary reflection of the surface of an imaginary painting that portrays figures whose imaginary whereabouts we can only imagine?

A dizzying retinal riddle of a painting, Las Meninas plays tug of war with our mind. On the one hand, the canvas’s perspective lines converge to a vanishing point within the open doorway, pulling our gaze through the work. On the other hand, the rebounding glare of the mirror bounces our attention back out of the painting to ponder the plausible position of royal spectres whose vague visages haunt the work. We are constantly dragged into and out of the painting as the here-and-now of the shadowy chamber depicted by Velazquez becomes a strangely elastic dimension that is both transient and eternal – a realm at once palpably real and mistily imaginary. 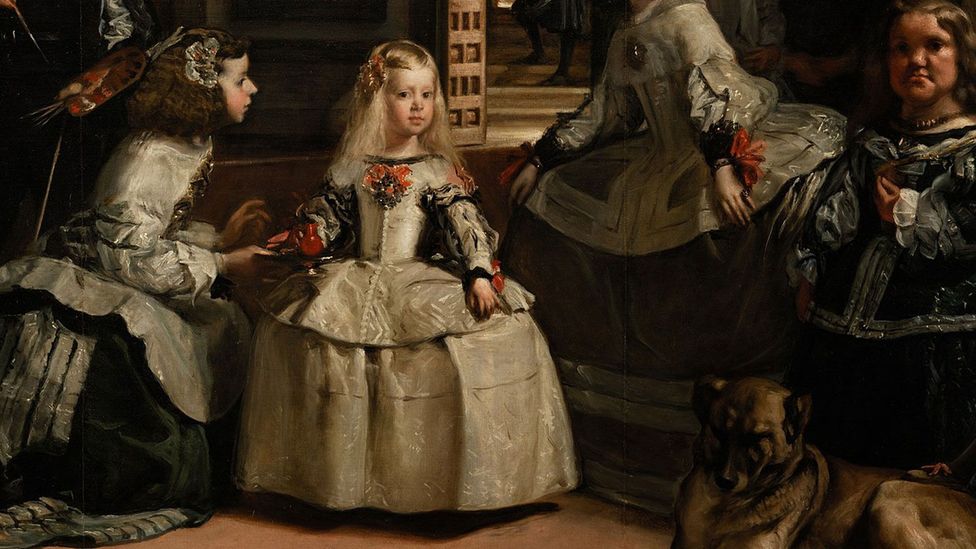 Maybe she is. Easily overlooked in the disorientating crossfire of optical, psychological, and philosophical perspectives that entangle this seemingly unfathomable puzzle of a painting is an object that may offer a material clue to the intended effect of Velazquez’s trippy masterpiece on our own consciousness: a vibrant vibration of otherworldly red at the heart of the work that thrums in the unassuming shape of small earthenware vase. Alone among objects in the painting, this modest jug, which is being offered to the young Infanta (and us) by a supplicating attendant on a silver platter, would have been recognised by contemporaries as embodying both mind-and-body-altering properties.

To call the complexion of that simple ceramic ‘otherworldly’ is more than mere poetic hyperbole. Known as a bucaro, it was among the many covetable crafts brought back to the Old World by Spanish explorers to the New World in the 16th and 17th Centuries. According to the art historian Byron Ellsworth Hamann, who has forensically traced the likely origin of many of the objects that adorn the interior of Velasquez’s work (including that silver tray), the vessel’s distinct glossiness and bright red hue mark it out as a product of Guadalajara, Mexico. A secret mixture of native spices kilned into the clay when the vase was made ensured that any liquid it held would be delicately perfumed.

The bucaro was known to have served another more surprising function beyond inflecting water with an addictively fragrant flavour. It became something of a fad in 17th-Century Spanish aristocratic circles for girls and young women to nibble at the rims of these porous clay vases and slowly to devour them entirely. A chemical consequence of consuming the foreign clay was a dramatic lightening of the skin to an almost ethereal ghostliness. The urge to change one’s skin tone can be traced back to antiquity and has perennially been driven by a range of cultural motivations. Since the reign of Queen Elizabeth, whose own pale complexion became synonymous with her iconicity, artificially white skin had been established in Europe as a measure of beauty. In warmer climates, it was thought that lighter skin provided proof of affluence and that one’s livelihood was not reliant on labour performed in harsh, skin-darkening sunlight. 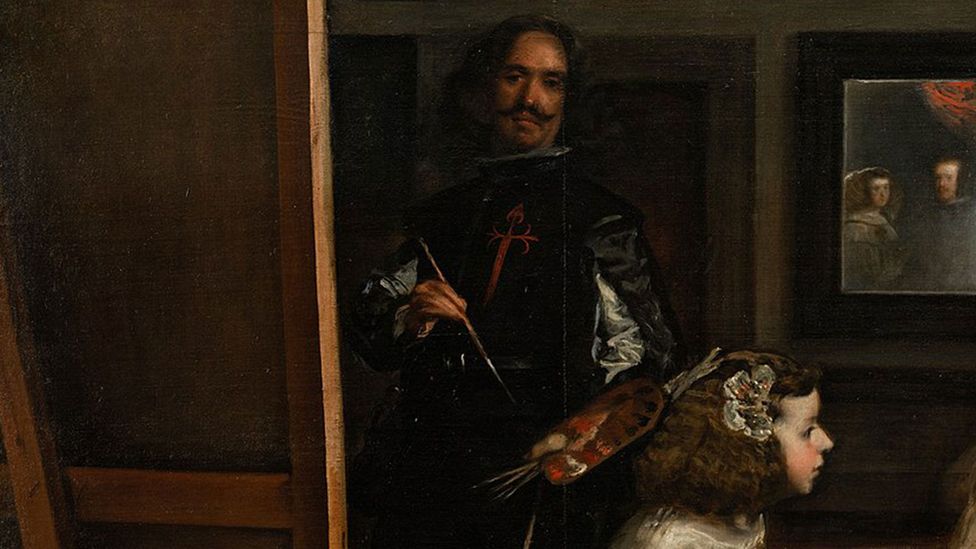 However bizarre it may seem, consuming bucaro clay to alter one’s pigmentation was less dangerous than some contemporary alternatives to skin lightening, such as smearing one’s face with Venetian ceruse (a topical paste made from lead, vinegar and water) which resulted in blood poisoning, hair loss, and death. That’s not to say the ingestion of bucaro clay wasn’t without its own unpredictable reactions, including a perilous depletion of red blood cells, paralysis of muscles, and the destruction of one’s liver. It also triggered hallucinations. According to the well-known autobiography of a contemporary female painter and mystic, Estefania de la Encarnacion, published in Madrid in 1631, an addiction to snacking on bucaros resulted not only in a death-in-lifeless of pallor but heightened spiritual awareness. Though she laments that it took her “a full year” to “rid me of this vice”, the narcotic effect nevertheless unleashed visions that enabled her “to see God more clearly”.

When we map the physiological and psychotropic effects of bucaro dependency on to the perennial puzzle of Las Meninas, the painting takes on a new and perhaps even eerier complexion. As the epicentre of the canvas’s enigmatic action, the altered and altering consciousness of the Infanta, whose fingers are wrapped around the bucaro (has she just taken a nibble?), suddenly expands to the mindset of the painting. Look closely and we can see that Velazquez’s brush is pointing directly at a pigment splotch of the same intense pulsating red on his palette as that from which the bucaro has been magicked into being. As spookily peaky in pallor as a genie conjured from a bottle, the Infanta appears too to levitate from the floor – an effect delicately achieved by the subtle shadow that the artist has subliminally inserted beneath the parachute-like dome of her billowing crinoline dress. Even the Infanta’s parents, whose images hover directly above the lips of the bucaro, begin to appear more like holographic spirits projected from another dimension than mere reflections in a mirror.

Suddenly, we see Las Meninas for what it is – not just a snapshot of a moment in time, but a soulful meditation on the evanescence of the material world and the inevitable evaporation of self. Over the course of his nearly four decades of service to the court, Velasquez witnessed the gradual diminishment of Philip IV’s dominion. The world was slipping away. The crumbly bucaro, a dissoluble trophy of colonial exploits and dwindling imperial power that has the power to reveal realms that lie beyond, is the perfect symbol of that diminuendo and the letting go of the mirage of now. The bucaro ingeniously anchors the woozy scene while at the same time is directly implicated in its wooziness. Simultaneously physical, psychological, and spiritual in its symbolic implications, the bucaro is a keyhole through which the deepest meaning of Velazquez’s masterpiece can be glimpsed and unlocked.