You may be tempted to take terpenes lightly, because these fragrant compounds are among the favorite chemicals of marijuana mega-fans and aromatherapy advocates. But their turn in the scientific and medical spotlight may have arrived. After decades of strong, but inconclusive, evidence of the role of terpenes in the therapeutic effects of medical cannabis, the National Institutes of Health (NIH) has been funding research on the medical value of terpenes for the last three years.

And with cannabis dispensaries — where legal — jockeying for a competitive edge, cannabis types with unique terpene profiles are providing a deeper, more nuanced experience for recreational cannabis users.

The Royal Swedish Academy of Sciences certainly took terpenes seriously 111 years ago. It awarded the 1910 Nobel Prize in Chemistry to Otto Wallach for his work with terpenes.

Humans primarily experience terpenes as distinctive plant odors. “They are the largest class of organic compounds known from plants,” says Andrea Holmes, professor of chemistry and director of cannabis studies at Doane University in Crete, NE and the chief growth officer at the Hudson, CO-based Precision Plant Molecules, which produces compounds found in cannabis. “You can find terpenes in fruits, vegetables, wood and flowers,” she says.

Holmes notes that chemists use the terms “terpenoid” and “terpene” for different versions of these compounds, but that only the term “terpene” is widely used in the cannabis world. “Terpenes are what give cannabis the most of the scent and flavor we know so well,” she says.

Ethan Russo, a neurologist who is the founder and CEO of CReDO Science, a company commercializing patented products derived from cannabis, says that terpenes play an ecological role in plants by attracting or repelling insects, deterring hungry plant-eaters and shaking off infections of molds or fungi.

Their roles as protective chemicals mean that plants often produce the most terpenes when grown under stressful conditions. “The best lavender in the world comes from Provence, France, where they have poor, rocky soil,” he notes. “A plant under attack from bugs is going to produce more than one of these compounds, which suggests that they work better together.”

Russo adds, “There are hundreds of types of cannabis. People get different effects from each of them.” That’s because people react to the different mixtures of chemical compounds found in cannabis plants.

Until recently, the research focus in the cannabis world has been on cannabinoids, which are the plant’s dominant biologically active compounds, including delta-9-tetrahydrocannabinol (THC) and cannabidiol (CBD). But a funny thing happened when synthetic and ultra-pure versions of cannabinoids such as THC and CBD were produced and given to medical patients: they didn’t have the same therapeutic effects as the “whole plant” version of the chemical.

Read more: The ‘Father of Cannabis Research’ on the Untapped Potential of Marijuana as Medicine

Several studies of pharmaceutical THC and CBD found that these compounds didn’t work as well alone as they did when administered with other cannabis compounds, Russo says. This led Russo to conclude that other compounds in cannabis, including terpenes, contribute to the therapeutic effect of medical cannabis, and that, “the plant does it better.”

You’ll find tens of thousands of terpenes in the world, and scientists have discovered over 200 terpenes in cannabis alone. Still, Holmes says, there are only 16 or so terpenes that are most commonly found in cannabis, and that are most typically tested for when evaluating the properties of a cannabis strain. In a 2011 study on the interaction of terpenes with cannabinoids in the British Journal of Pharmacology, Russo profiled these terpenes: 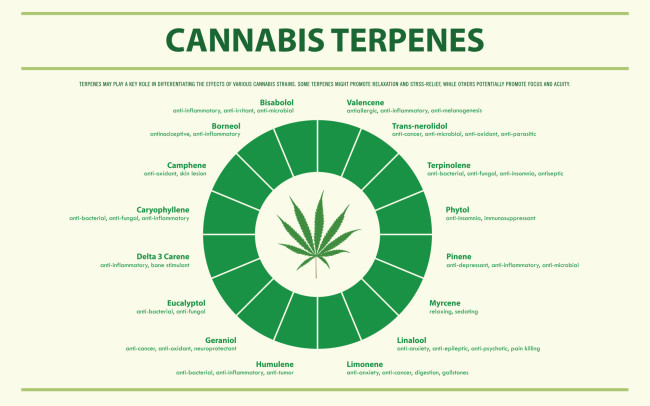 For Russo and Holmes, it’s not what terpenes can do alone that’s the draw, but how they can enhance the effects of cannabinoids. “It’s like a good marriage,” says Holmes. “When you partner THC with limonene and pinene, it gives an ‘entourage effect’ that enhances the analgesic effect of THC. When you put them together, one plus one equals 10.”

Russo explains that THC is infamous for interrupting short-term memory. Pinene is a memory enhancer, he says, that can counteract that negative effect. While the entourage effect has gotten a lot of attention from recreational cannabis users seeking a specific experience, he doesn’t want the medical implications to be overlooked.

The effective dose of cannabinoids has a very narrow range, he says. Too little and there is no benefit; but too much, and unwanted side effects such as paranoia kick in. “Terpenes make the overall mixture more therapeutic. You can increase the dose to get more of a benefit with fewer side effects,” Russo says.

Holmes feels that both laws and cultural attitudes towards cannabis have stood in the way of more scientific research and more people benefiting from the chemical compounds created by the cannabis plant. Unlike cannabinoids, terpenes are legal in the United States. Plus, she asks, “How can you stigmatize the smell of pine trees?”

Terpenes have mostly been investigated by aromatherapy practitioners, Russo says, and while there haven’t been a lot of high-quality investigations, they do exist. Researchers such as Ryan Vandrey of Johns Hopkins are conducting the kind of double-blind, controlled studies on terpenoids that change attitudes, Russo believes.

Holmes says she first noticed requests for proposals on terpene research from the NIH’s National Center for Complementary and Integrative Medicine in 2018. Now that it’s been three years since that first round of NIH funding, Holmes expects to see published research results soon.

Cannabis is a “pharma factory,” Holmes says. With terpenes, we are beginning to see what this plant has to offer. But it’s only the beginning, she says. There is still a lot to learn about terpenes and about the other organic compounds produced by the cannabis plant that are waiting to be researched and used.