When early Earth was still a molten mass with a surface swimming in liquid magma, Pluto — along with its icy underground ocean — were just forming. And for the billions of years since, liquid plutonian water has remained in the distant solar system, providing a potential abode for life. At least, that’s the conclusion of a new study published June 22 in the journal Nature Geoscience.

The study rewrites scientists’ theories about the early history of Pluto and suggests that other liquid oceans — once thought to be unique to Earth — are common on dwarf planets across the outer solar system.

“Oceans are ubiquitous. Most of them are in the outer solar system. And they could be abodes for life,” says S. Alan Stern, an astronomer at the Southwest Research Institute and head of NASA’s New Horizons mission. “This is a fundamental sea change in the way we view the solar system.” 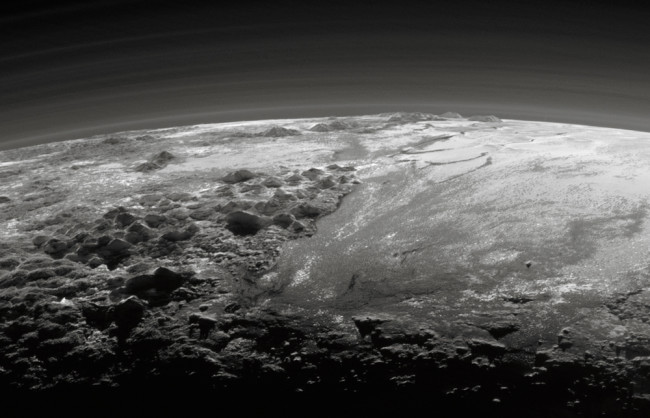 When the New Horizons spacecraft made its flyby of Pluto in 2015, it revealed a surface geology so active and complex that scientists suspected there may have once been an ocean buried miles beneath Pluto’s thick crust of ice. Those suspicions have grown closer to presumptions in recent years. And now, most planetary scientists agree that, even today, Pluto has a global liquid ocean under its surface.

But how does a world smaller than Earth’s moon harbor on ocean? And how did it manage to keep it from freezing over the course of billions of years?

With the new study, scientists think they finally have an answer to these questions.

Until now, astronomers assumed that Pluto formed out of cold material glomming together very slowly. As a dusty disk of debris coalesced around our sun, the dwarf planet would have gradually clumped together out of bits of rock and ice. Once large enough, Pluto’s internal heat would have melted some of its ice, creating a subsurface ocean. That story works well, astronomers say, as Pluto’s underground ocean is explained simply by the decay of radioactive elements.

But the team behind this latest research wanted to test that theory anyway. They wanted to find out whether Pluto started off hot instead, and formed through a series of massive impacts much like early Earth.

“We understand this picture fairly well from the early inner solar system through meteorites and other things,” says lead study author Carver Bierson, a graduate student at the University of California, Santa Cruz. However, he adds, “we actually don’t have much of a picture for the outer solar system.”

Putting Pluto in the Freezer

As it turns out, there is a way to tell whether Pluto formed hot or cold by simply observing the dwarf planet’s surface. It relates to the straightforward fact that water expands as it freezes and compresses when it melts.

“If you take a glass of water and put it in the freezer, that glass is going to break overnight because when the water freezes, it expands,” Stern says. “The same thing is true on Pluto.”

When water freezes, the molecules inside vibrate less and form a crystalline structure that leaves ice less dense. That’s why ice cubes float in your glass, and why this solid water also expands.

So if Pluto started hot and then slowly froze, its surface should have expanded, leaving evidence of geologic features formed through expansion. But if Pluto had a cold start, the dwarf planet’s surface should show evidence of compression going back into the world’s distant history.

To probe which of these two scenarios fits the evidence, the team took a closer look at New Horizons’ data, searching for signs of either expansion or compression. They were surprised by what they found.

“We see terrains on Pluto that look to be very old, roughly the age of the solar system, and we don’t see evidence of that compression,” Bierson says. That suggests a hot start.

One such example comes from craters. Impacts on an icy world typically form neat circles. But over time, Pluto’s craters have all been stretched out, even ones that sit in the oldest terrains. However, none of them are compressed.

There are other lines of evidence, too.

Bierson went on to model Pluto’s early formation using a hot-start scenario. He found that if Pluto formed through a rapid succession of large impacts, the heat from those explosions would continue to build up. This would maintain Pluto’s internal ocean in a liquid state. But for that to have happened, Bierson says, the world must have formed in some 30,000 years — if not less.

Still, this idea actually matches up well with other recent models of the early evolution of the Kuiper Belt, a region of icy objects and dwarf planets beyond Neptune. Studies suggest that smaller Kuiper Belt objects could have formed in just a few hundred or thousand years.

“It’s kind of nice that the geology is telling us this,” he says. “People trying to understand the [Kuiper Belt] dynamics are also coming to this conclusion.” The conclusion of a hot start for Pluto “is a weird, surprising answer,” he adds. 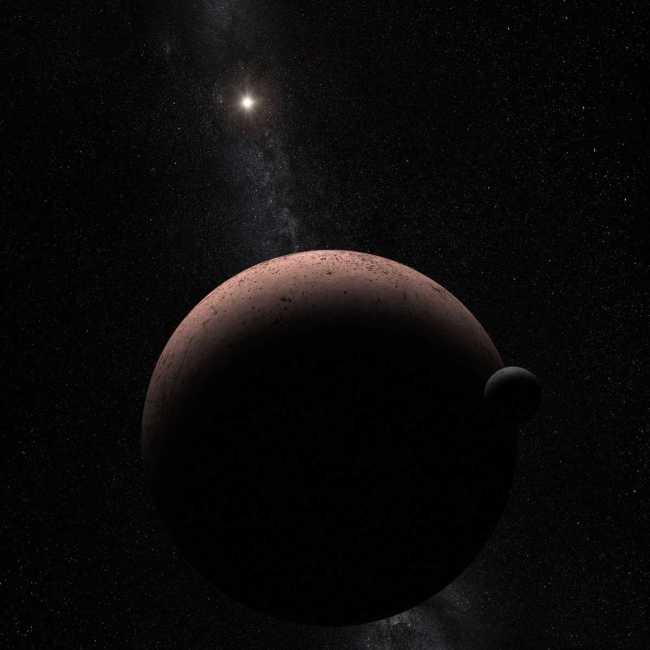 Pluto’s suspected sizzling start also carries major implications for the small world’s neighbors, like Eris, Makemake and Haumea. If Pluto formed hot and fast, other dwarf planets likely did as well. Taken together with new knowledge of the icy ocean moons around the gas giant planets, astronomers are overturning the old notion of Earth as the sole ocean world in our solar system. Instead, it could be that the outer solar system is surprisingly rich in liquid water.

“Dozens of worlds in the inner and outer solar systems could have oceans,” Stern says. “It’s one of the most profound discoveries in planetary science in the Space Age.”

These alien worlds might not seem like a likely place for life to emerge. Pluto sits an average of some 4 billion miles from the sun (about 40 times farther away than Earth), where very little light reaches the dwarf planet’s surface, letting temperatures drop to around -400 degrees Fahrenheit.

But below Pluto’s frigid surface, in the relatively warm subsurface ocean, life would be protected from radiation and asteroid impacts.

“The interesting thing about oceans on the inside is that, in some ways, they’re much safer havens for life,” Stern says. “You’re protected from impacts like the ones that killed the dinosaurs. If the sun releases flares or a supernova goes off, then you’re safe from that.”

How Pluto Got its Heart

This latest find adds to a growing body of evidence that suggests Pluto has long harbored an active ocean. And another piece of that puzzle only arrived earlier this year.

Pluto’s icy “heart” is the world’s most recognizable feature. The region is shaped by what looks like a giant impact basin the size of Texas. The heart’s left lobe consists of a 600-mile-wide (1,000 kilometers) ice plain called Sputnik Planitia, which is the largest glacier in the solar system. When New Horizons first brought this feature into clear focus, astronomers thought it must have formed when another large object smashed into Pluto in its past.

However, the exact location of the basin is suspicious. It sits on precisely the opposite side of world from Pluto’s large moon, Charon. Because an impactor could have hit Pluto anywhere, Stern says, “the idea that this just happened to strike opposite to Charon could be coincidence, but it seems to me too much to believe that it happened entirely by chance.”

Instead, he thinks the alignment between Charon and Sputnik Planitia could be due to a complicated process called polar wander. Based on models, scientists think the massive glacier could have easily slid along the dwarf planet’s surface until it sat directly opposite from Charon. But that model only makes sense if Pluto has an ocean.

And that’s why Stern and a team of researchers are pushing for a Pluto orbiter that would not just return to the dwarf planet, but actually orbit it. New Horizons only got a quick look at Pluto during its brief flyby. And though groundbreaking, the probe only captured high-quality images of 40 percent of the distant world. And another 40 percent of the surface was too dark for New Horizons to even make out anything at all. A Pluto orbiter, on the other hand, could be built with radar and laser instruments that don’t need visible light to see the surface.