This story originally appeared in the December issue of Discover magazine as “Talk to the Hand.” Support our science journalism by becoming a subscriber.

Take a moment to pay attention to your hands.

It will be time well spent, because they are evolutionary marvels. Hold one up and examine it. Open and close it. Play with your fingers. Touch the tips of your four fingers with your thumb. Rotate your wrist. You should be able to turn it 180 degrees with ease. Ball your hand up into a fist until your thumb lies on top of and lends support to your index, middle and ring fingers. That is something no ape can do.

It is not only the flexibility granted by the fully opposable thumb that makes the human hand so special, but also its extraordinary ability to feel and to touch. It operates almost like an independent sensory organ. We use it to feel the temperature of a breeze and of water. With its help we are able to fit a key directly into a lock, even in the dark. We can detect uneven surfaces with our fingers that we cannot see with our naked eye. With a little bit of practice, we can use our fingers to tell real silk from synthetic silk or real leather from fake leather, even with our eyes closed.

Our fingers can even replace our eyes as ways to perceive the world, as the Dutch paleontologist Geerat Vermeij, who has been blind since the age of 3, can attest. A specialist famous for his work on marine mussels and their ecosystems, he has never seen a fossil. Out in the field, he feels the complex morphological structures of mussels and of the rocks in which they are found. With his fingers, he “sees” details many sighted scientists miss. There is no doubt about it: Our hands are an exceptional development in the history of evolution.

But how did a precision tool like the human hand, a tool that seems to have been at least as important for the process of becoming human as our upright gait, develop? The evolutionary ball started rolling, of course, when walking on two feet meant the hands were no longer needed for locomotion. They could then be used for a wide range of tasks: transporting food or offspring, scooping up water, gathering material to build a shelter or holding objects in one hand and manipulating them with the other to carry out specific tasks.

The more skilled our ancestors were with their hands, the more successful they were and, therefore, the higher the survival rate of their offspring. And so advantageous adaptations in hand structure prevailed as natural selection took its course. The evolution of our brain and our anatomy advanced in lockstep. The balance between hand bones, tendons, muscles and nerves was constantly being refined, as were the hand’s increasingly sensitive sense of touch and the brain’s ever-more sophisticated oversight of motor coordination. The result is a multi-faceted tool that has helped us build, hunt, eat and communicate.

We can trace the evolution of our hands back to the very beginning of the primate ancestral chart over 70 million years ago. The development of the primate hand probably started with small ancestors that lived on the ground and gradually conquered the tree canopy as their new home. Those that could grasp small objects clearly had the advantage.

For a long time, scientists thought that the early members of the genus Homo started out equipped with a hand anatomically similar to the hand of a modern human. This notion can be traced back to a few spectacular fossil finds in Africa from the early 1960s.

There was great excitement in May 1964 when primate researcher John Russell Napier, along with paleoanthropologists Phillip Tobias and Louis Leakey, reported that over the course of many years of working in the Olduvai Gorge in Tanzania, they had found remains, including many hand bones, of the first humans to make tools. “The hand bones resemble those of Homo sapiens sapiens,” they wrote; from the individual fragments, they had reconstructed a hand that had especially powerful joints at the base of the fingers and a prominent thumb. At the time, news of a humanlike hand that was 1.8 million years old caused a firestorm of interest.

The hand fragments were one of the main reasons the researchers attributed the bone finds to an early human, standing no more than 4 feet tall, that they called Homo habilis (Handy Man). That is controversial to this day, because a row of teeth found at the same time are a match for an early hominin of the genus Australopithecus. What is not in dispute is the special nature of the hand bones, which show clear evidence of a hand that was already strikingly human in appearance, with a relatively long, quite flexible thumb.

Adding Meat to the Menu

Despite all the debate around Homo habilis, its relatively sophisticated hand shape was a good fit with the pebble tools of a similar age found in the Olduvai Gorge. Whether Homo habilis was a handy early human or a handy early hominin, there was no doubt that nearly 2 million years ago, the inhabitants of Olduvai had taken a hammerstone in one hand and struck it against another stone to manufacture a stone tool with a sharp cutting edge. The brains of these gorge dwellers were approximately half the size of ours and the functional potential of their hands was not yet developed, but their hands were definitely no longer the hands of an ape. 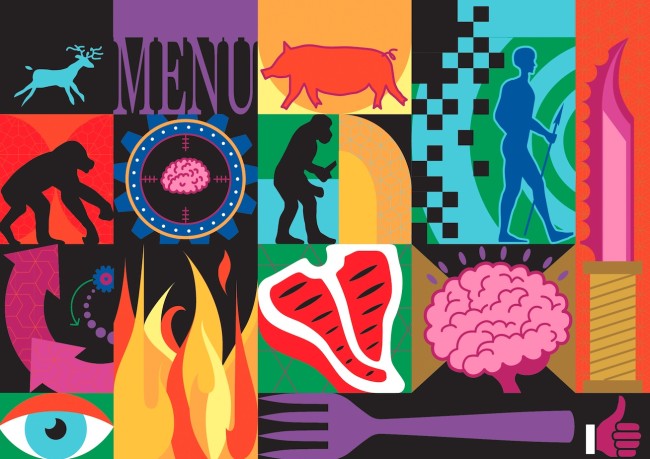 Flexible hands and simple stone blades allowed the gorge dwellers to occupy a new ecological niche in the savannah-like landscape they called home: that of carrion eater. There were numerous large mammals grazing on the extensive grasslands, and they often fell victim to big cats. After the carnivores helped themselves, there was usually nutritious meat left over that could be quickly cut and scraped from the bones with sharp-edged stone tools — preferably before the hyenas or vultures arrived.

In the early 1990s, two American archaeologists, Kathy Schick and Nicholas Toth, did field tests in the East African savannah to see how well this would have worked. They tried cutting and scraping dozens of carcasses, including two elephants, using primitive stone tools. “We were amazed,” they wrote, “as a small lava flake sliced through the steel gray skin, about one inch thick, exposing enormous quantities of rich, red elephant meat inside. After breaching this critical barrier, removing flesh proved to be reasonably simple, although the enormous bones and muscles of these animals have very tough, thick tendons and ligaments, another challenge met successfully by our stone tools.”

When these primitive tools were wielded by modern humans, it was clearly a quick and easy job to use them to cut meat. Adding meat to the menu was a crucial step on the way to becoming human — up until then early hominins had likely mostly eaten plants. The increased protein intake must have led to better health overall and, in the long term, helped increase the size of the brain. And in the process, our hands were not only used for eating, crafting, throwing or fighting, but also for communication.

From Grabbing to Gesturing

There is some indication that the evolution of the hand had a significant influence on the development of speech. No direct evidence, of course, but you can deduce this indirectly by observing our closest relatives, the great apes, or by watching small children as they acquire language, using hand gestures to indicate what they want long before they say their first words.

For humans, gestures are an important component of expression. They both precede and accompany speech. They emphasize what is said and convey emotion. They can signal dismissal or acceptance. They can threaten, or they can express, elicit and offer sympathy. In the sign language used by those who cannot hear, gestures almost completely replace words. Many scientists assume that gestures and sounds developed together over many millions of years to create increasingly complex forms of communication, mutually supporting and supplementing each other.

Chimpanzees, bonobos, gorillas and orangutans are also capable of communicating with gestures — although their repertoire is extremely limited. A field study carried out by British scientists in 2018 recorded more than 2,000 separate observations and documented 33 different gestures. The vast majority were simple orders, such as “Give me that!” “Come closer!” “Groom my fur!” “I want sex!” or “Stop that!” All these gestures serve to start or stop a specific behavior. The researchers found that chimpanzees, gorillas and orangutans not only used most of these gestures but also used them in the same way. Humans may appear to use gestures in a similar manner, but how we use our hands to talk has a lot more to do with social context and language cues.

Talking with Our Hands

Michael Tomasello and his team from the Max Planck Institute in Leipzig have been searching for the origins of language for the past two decades. In numerous experiments in which they compared human behavior with the behavior of apes, they observed that human gestures went far beyond the simple orders given by apes. Apes indicate things that are useful to them at that moment. Human gestures often have a social context. They indicate things that might be of use to others or express emotions and attitudes that are relevant to the community.

It seems it all started with gestures centered around self-interest and then, sometime in the story of becoming human — it is difficult to say exactly when — gestures were added to share experiences, intentions, interests and rules. Tomasello is convinced that communication originated when early humans started pointing to things to show them to others. For example, an early hominin may have pointed to a vulture that was circling over a recently killed animal, a place where nutritious roots were buried underground or a small child that had distanced themselves from the group as they went off to explore.

At first, pointing gestures would have helped coordinate communal activities such as hunting or child minding. Later, they evolved into more complex signs for concepts, such as a fluttering movement to indicate a bird or cradling the arms to indicate a baby. According to Tomasello, sounds were then added to augment and expand this language of gestures. This corresponds with the American psycholinguist David McNeill’s idea that gestures are basically nothing more than thoughts or mental images translated into movement. Having the hands free was a necessary part of the evolution of speech — and integral to communication as we know it today.

Excerpted from Ancient Bones: Unearthing the Astonishing New Story of How We Became Human, by Madelaine Bohme, Rudiger Braun and Florian Breier (foreword by David R. Begun). Available now from Greystone Books. Excerpted with permission of the publisher.