Rome wasn’t built in a day, as everyone knows. So how long did it take to build this great city of the ancient world? The truth is nuanced and depends on how you define the question.

According to legend, Rome was founded in the year 753 B.C. Meanwhile, research suggests the city began as a small farming settlement around 600 B.C., give or take a century. Whatever the formal start date, in the centuries that followed, Roman builders would construct some of the most famous architectural feats ever seen in the ancient world.

Yet many of their ideas weren’t their own. From aqueducts and arches to dams and domes, the Romans were masters of improving on and expanding existing ideas. The ill-fated Amphitheater of Pompeii and the iconic Colosseum and Pantheon were a few of the Roman buildings that were unrivaled in their day — and their remains still leave visitors in awe.

Though the city rose in fits and starts, Rome reached the height of its great building period between roughly 40 B.C. and 230 A.D. After that, the nation lost its wealth and saw its central government destabilize. Finally, the collapse of the Roman Empire came in 476 A.D. when Germanic tribes broke through the borders.

So, according to the dates offered by ancient historians, it took 1,229 years to build Rome by counting from its founding until its collapse. However, the ancient city actually saw its population max out at one half to one million people in the second century A.D., depending on which estimate you use. And building largely petered out before the empire’s final days. That means it took roughly 800 years to build ancient Rome to its peak. 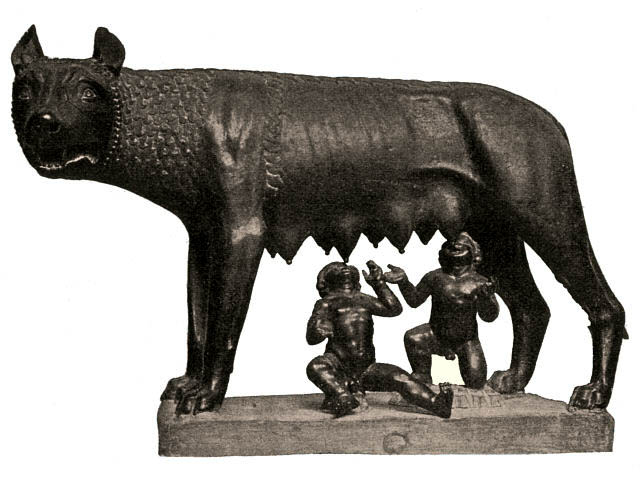 The Period of Kings

Much of Rome’s earliest history has been lost to time. According to ancient Roman historians, many great works of literature were destroyed along with much of the rest of the city during the sack of Rome by the Gauls in 390 B.C. Thankfully, a handful of historians — all born centuries later — wrote down their versions of the oral histories of the day, providing us with some basis to understand the so-called Period of Kings. Legend tells us that Rome was founded on April 21 of 753 B.C., a suspiciously precise date recorded by the first-century historian Marcus Terentius Varro.

And another historian, Livy, recorded the story of Rome being founded by two twin brothers, Romulus and Remus. Their image is often portrayed in Roman myths as a pair of infants suckling at a she-wolf’s breasts. The twins couldn’t agree who should rule the city once it was built, so Romulus killed his brother and took the mantle of Rome’s first king. According to Roman myth, Romulus built the laws, formed the armies, and developed the city-state’s social and religious systems. He’s even said to have created the first senate. It was during this same Period of Kings that the Circus Maximus, one of the largest sports arenas ever constructed, was first built. Livy tells stories of Romulus himself staging chariot races at the site.

And Livy also writes that Romulus constructed walls around the city, making them bigger and bigger, with the intention to draw in new territories and plan for the population he hoped Rome would someday have, rather than the one it possessed at the time. But more modern investigations have disproved this idea. The oldest known defensive wall encompassing the city is called the Servian Wall, named for the sixth king of Rome, Servius Tullius, who actually died long before it was built in the fourth century B.C. In the centuries that followed, the walls would be pushed farther and farther into the surrounding countryside as Rome’s population outgrew the existing city limits.

In all, a total of seven kings are said to have ruled Rome from the time of its founding until the political revolution that overthrew the Roman monarchy around 509 B.C.

However, modern scholars question much about these earliest rulers. Romulus’ story is the most suspect. Clearly, building the initial city took much longer than one lifetime.

Instead, archaeology paints a much more mundane picture. Digs in the hills surrounding Rome show people were living there as early as 1000 B.C. Then, local farmers slowly started to transition from a rural, agrarian life to one inside the walls of a gradually growing city.

We now know that Rome’s origin story emerged out of cultures that lived in the region for centuries before the city’s legendary founding. The Latium people spoke a precursor language to Latin and farmed on a small region of fertile, volcanic soil near the Tiber River in central Italy. These Latium villagers feuded with the nearby Etruscan civilization. And somehow, whether through conquest or in a defensive move against their neighbors, farmers from across the region had come together and built the foundations for what would become the city of Rome by sometime around the sixth century B.C. Much of this early history remains uncertain.

Things progressed relatively fast from there. In recent years, an expansive archaeological excavation called The Sant’Omobono Project has discovered some of the oldest-known buildings from this Period of Kings. During a dig at Capitoline Hill in the heart of Rome, archaeologists unearthed a sixth century B.C. temple dedicated to the goddess Fortuna, which served as a trading station to exchange wares with merchants from across the ancient world. The researcher’s findings show that by this point, Rome was not only building monumental architecture, it was also already trading with faraway places like Lebanon and Egypt. This temple and others like it likely offered a neutral trading ground and helped establish Rome as the metropolitan city it was about to become. 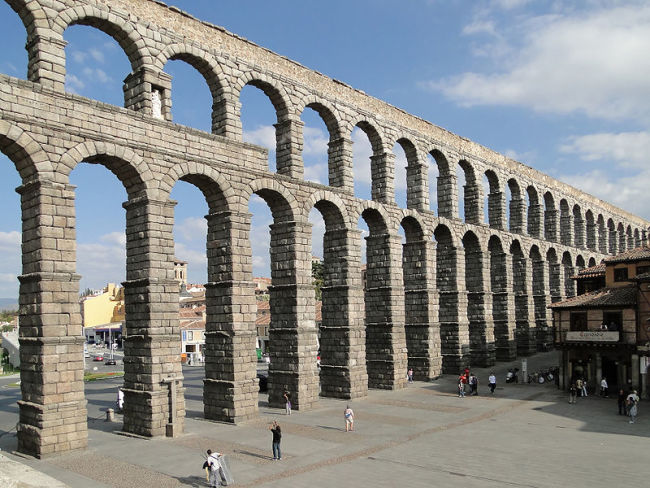 The Roman aqueduct in Segovia, Spain, is a popular tourist stop and a great example of the lifted structures that carried water across valleys and urban landscapes thousands of years ago. (Credit: Bernard Gagnon/Wikimedia Commons)

The Roman Republic began around 509 B.C., after the Roman monarchy was thrown out, and lasted until roughly 31 B.C. It ushered in a period of great battles and expansion and also saw the rise of Rome’s most famous leader, Julius Caesar.

That growth was fueled by battles waged across the ancient world. At home, in the city of Rome, the spoils of war let the Republic invest in all manner of new capital developments. To supply the growing industries and population, they constructed the first Roman aqueducts and the first Roman road. They also built an enormous fleet of warships and a plethora of inventions like grappling devices for naval battles.

Republican Rome also saw the construction of grand temples like the Pantheon and expanded entertainment venues, like the Circus Maximus, which by that point had grown from a horse track through farm fields into a more proper arena.

But it wasn’t all one giant building boom. Republican Rome was often a tumultuous place. Three times, slaves revolted and swept through much of the nation — including the rebellion led by the gladiator Spartacus. And as the period came to a close in the final decades before the now-recognized Common Era, Rome’s empire had been split into a number of warring factions. 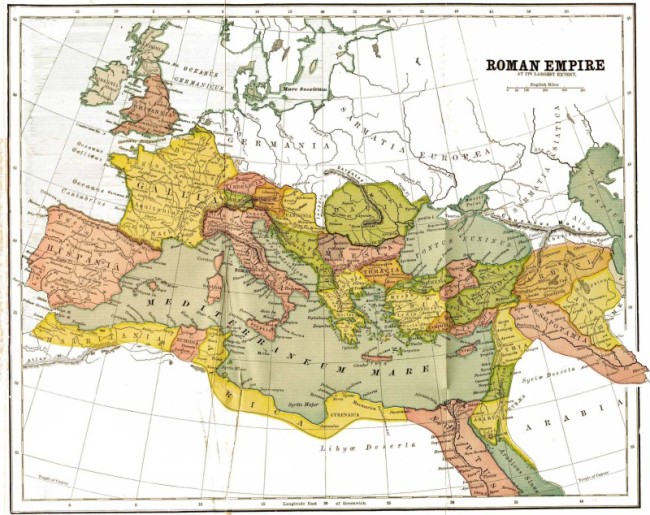 This historical map depicts the territories held by the ancient Roman Empire at its peak. (Credit: Wikimedia Commons)

Imperial Rome is the period many people imagine when they picture the ancient civilization. It began in the year 31 B.C. when Octavian defeated the rebelling Mark Antony and Cleopatra of Egypt in battle. The victory sealed control over much of the ancient world. Afterward, Octavian took the name Augustus and became the first Roman Emperor.

Augustus’ most trusted advisor was Marcus Agrippa, a famed Roman general, politician and builder. Agrippa gets much of the credit for his friend’s victories, and Augustus rewarded the general by putting him in charge of a number of public building projects at home.

Agrippa was pivotal in constructing Rome’s aqueducts, expanding its network of home water pipes and sewers, building public baths and planting lavish gardens. His works could be found across the city. The change was so great that Augustus claimed his general had transformed Rome from a city of brick to a city of marble.

But that building didn’t stop after Augustus’ death because the long series of emperors that followed weren’t content to hold their borders. Using the wealth of their existing empire, Rome continued conquering neighboring civilizations across the centuries until the city controlled much of Northern Africa, the Middle East and Europe.

And all that expansion abroad required construction on an unprecedented scale. Defending victories required massive fortifications. In Great Britain, for example, Roman builders constructed Hadrian’s Wall and the Antonine Wall to keep out the conquered Picts. And even conquered cities far from the capital saw enormous building projects.

Starting around 90 A.D., Roman builders began constructing a series of tunnels and bridges in present-day Jordan and Syria that carried water through the desert for perhaps more than 100 miles. The so-called Gadara Aqueduct tapped a swamp to supply water to a network of 10 oasis cities in the desert dubbed the Decapolis. Construction spanned over roughly a century. Then, in Tunisia in the second century A.D., one of the largest aqueducts ever built supplied Carthage with water from some 80 miles away.

Meanwhile, in Rome itself, building projects also grew to levels previously unseen. Around the year 80 A.D. the Colosseum was completed in Rome’s city center, providing a place for some 60,000 spectators to witness gladiator battles, theatrical reenactments and more. It was arguably the most grandiose and famous building Rome would ever construct. 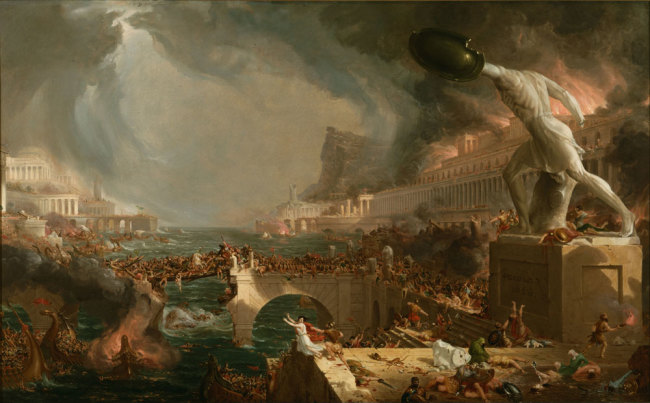 This painting (circa 1836) titled “Destruction” is suggestive of the sack of Rome. It’s the first in a five part series by Thomas Cole called “The Course of an Empire.” (Credit: Wikimedia Commons)

Under emperor Trajan, who died in 117 A.D., the Roman empire spread to its greatest geographic extent. At that point, Rome’s influence spread from nearly the Persian Gulf to Northern Europe. The city itself had become a cosmopolitan melting pot for people from cultures across the region, DNA studies show.

In the following centuries, a series of plagues, invasions and civil wars would collectively bring Rome to its knees. Lead levels found in ice cores from Greenland suggest that Rome’s economic engine started to fail around the time of the Punic Wars in the second century A.D. Even climate change likely played a role in the Roman Empire’s collapse.

As the nation’s control abroad faded, it would eventually weaken their ability to construct great works at home. By the time the end arrived, the city of Rome was often rallying just to stop its existing infrastructure from falling apart. The final blow came when Germanic invaders breached Rome’s borders in 476 A.D.

The ancient Roman empire had collapsed, and the city itself would only recover its former population size in more modern times. Yet many of Rome’s greatest feats of engineering survived that long interlude and are still with us today. They’re reminders of what’s possible with enough skill, planning and above all else, time.