A peregrine falcon hurtles at over 100 mph toward rows of grapes. It banks at the last moment, passing within inches of professional falconer Kalen Pearson’s smiling face. The high-velocity interspecies dance causes a flock of European starlings to scatter — along with any other nearby birds that have any sense. Rows of plump organic grapes are safe for now, and so are the invasive starlings. In falconry-based bird abatement, the game isn’t the catch; it’s the chase.

Farmers have been chasing superior and safer methods of crop preservation for millennia. This quest to build better mousetraps and scarecrows has daunted agricultural workers since the Neolithic era, and the modern age still hasn’t mastered the art of deterring hungry field pests, which eat crops and can spread pathogens through feces. The consequences can be deadly for producers’ profits, as well as for human bodies.

In April 2018, for example, E. coli in romaine lettuce from Yuma, Arizona, killed five people and hospitalized nearly 100. In October 2015, an outbreak of the same bacteria sickened 55 people who had eaten at Chipotle Mexican Grill. Though the source of the bacteria was never pinpointed, unwanted rodents can spread these foodborne diseases. 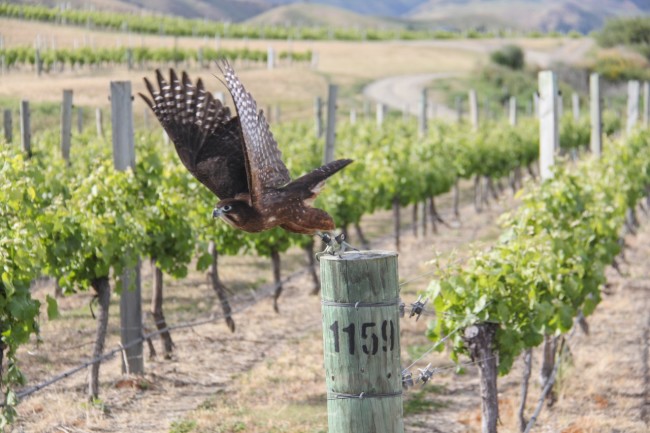 Farmers have tried decoys, reflective mylar tape and moving lights to keep field critters away. Acoustic strategies include propane cannons, pyrotechnic “bird banger” pistols, speakers mimicking bird alarm calls and sonic net systems. But adaptive animals grow used to these sound deterrents. Lethal methods such as shooting or poisoning pests are controversial, and only effective if large numbers are killed. Other measures, such as nets, are costly. Pesticides can leave a major impact on the environment.

The string of trial-and-error methods, with mixed results, has prompted some farmers to fight birds (and other pests) with birds. The concept turns to millions of years of natural predator-prey evolution and an ancient sport leveraging human and falcon cooperation. But the specialized field of falconry-based pest abatement for crop production is just beginning to hatch.

The earliest evidence of using trained birds of prey to clear the sky comes from a Scottish airbase in the late 1940s, when falconers deployed both peregrine falcons and gyrfalcons to chase away seagulls near the runway. (Only the peregrines succeeded.) The industry continued to stretch its wings over the following decades as a way for airports in Europe and North America to keep flight paths clear.

Food science took interest in 1978 when a study examined if the airfield strategy could produce similar results in farm fields. In the experiment, goshawks were used to chase wood pigeons out of vegetable fields in Oxfordshire. The results in that case showed that divebombing goshawks were as effective as humans walking through a field when it came to scaring off hungry pigeons.

Since then, falconry abatement has evolved with various approaches, particularly gaining momentum at California vineyards in the 1990s. Today, the method is often paired with smartphone-controlled GPS tracking systems and drones, as well as other technological advances. And new research is refining the work, such as the realization that the threat of a patrolling predator in a field can be more effective than an actual attack from a raptor’s razor-sharp talons.

In 2015, researchers at the University of California, Davis, teamed up with falconer Kathleen Tigan, owner of Tactical Avian Predators. In a series of experimental trials, Tigan flew both lanner and saker falcons through fields of leafy greens while researchers tracked daily counts of bird flocks — and their poo.

“We’re not hunting. We’re security guards,” Tigan says of her method. “You let (the pests) know with your predator birds that if you cross that line, you’re going to be in fear of being eaten.” The study demonstrated that falconry reduced both bird intrusions and the amount of fecal matter in the fields, with levels remaining low days after the falconer left. 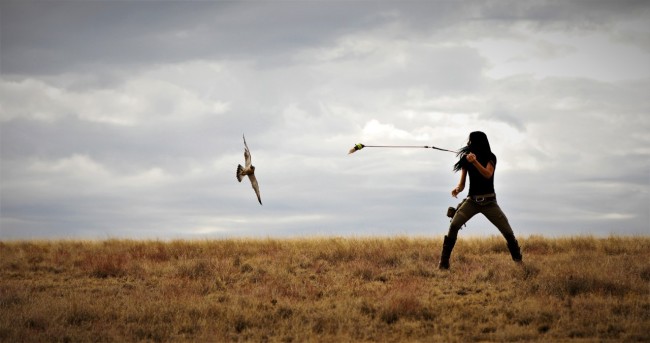 That experiment’s small-scale success prompted a larger follow-up study in 2018 led by Paula Rivadeneira, then a food safety specialist at the University of Arizona Cooperative Extension. Rivadeneira enlisted teams of falconers to protect multiple fields for months under the blazing Arizona sun. Starting in February 2018, the teams conducted daily patrols, dawn until dusk, with their raptors (barring some days with heavy rains, high winds or noxious chemicals) for two growing seasons of leafy greens. The birds excelled, achieving a 97 percent success rate in chasing away nuisance birds, according to Rivadeneira. One farmer estimated that they saved crops valued between $400,000 and $1 million.

Still, one particular species of brave little birds posed a challenge. While red-winged blackbirds, brown-headed cowbirds, egrets and other birds generally retreated when faced with the working raptors, these other birds (the participants suspect they were meadowlarks) found protection in the crop itself. Flushing them out over the course of the experiment required all the dogs of war: bangers, screamers, drones, even actual dogs.

The takeaway? Yes, birds of prey keep the other birds away. But, “falconry alone isn’t going to work,” Rivadeneira says. “It really takes multiple techniques to keep these nuisance birds out.”

Another lesson was that the long hours exposed to the elements took a greater toll on the humans than the falcons — and trained falconers are in short supply. One falconer had to be terminated on short notice during the study. Finding a replacement with the right skillset in the middle of harvest season proved a major challenge, says Tiffany White, co-founder of Sonoran Desert Falconry, which provided the raptors and handlers for the project. White suspects the number of qualified falconers is one factor limiting how fast the industry can grow, especially given the overlap of harvest times for different crops.

For farmers, recruiting wild birds of prey may serve as an alternative, supplement or complement to hiring a falconer team. Installing bird boxes often does the trick, attracting kestrels or owls around a property. “They say, ‘If you build it, they will come,’ ” Rivadeneira says. Then they will eat — often as many as 1,000 rodents a year for a family of barn owls. 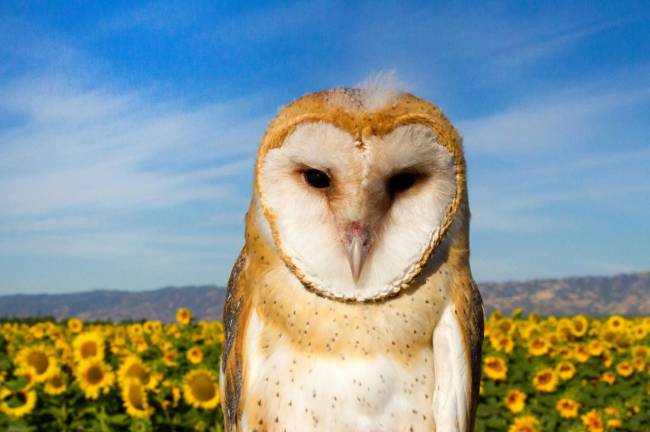 Related studies have found promising results in Malaysian palm oil plantations, Israeli farms and beyond. Biologists from Michigan State University and the USDA found installing nest boxes for wild kestrels can protect orchards in the state. On the other side of the world, researchers introduced wild falcons to New Zealand vineyards and found the raptors reduced the number of grapes removed by pest birds by 95 percent. The approach can create a holistic benefit for natural systems, as well as farmers, says Sara Kross, a conservation biologist at Columbia University who worked on the New Zealand study.

“There are plenty of case studies where farmland is a good source of biodiversity conservation, but there is a lot of [room] to improve it,” Kross says. “I hope that as farmers become more aware of the benefits they receive from wildlife, they are more inspired to take action.”

Despite the limitations of falconry abatement, it’s likely to expand, according to White — if qualified falconers can be found. Licensure currently requires someone to be a master falconer, which itself requires seven years of experience, including a two-year apprenticeship under a master, plus additional specialized knowledge. Pearson recently opened a school in the Phoenix area under her nonprofit, Skywolf Inc., designed to teach veteran falconers about abatement.

“Bird abatement, especially in agriculture, is really about creating a symphony and trying to do it as quickly and effortlessly as possible,” she says. Just as a symphony requires an orchestra, proper abatement work takes more than one instrument — including one with razor-sharp talons.

Jeff Kronenfeld is a freelance journalist and author based in Phoenix. He writes for Vice, Psychedelics Today and other outlets.