When Helene Langevin was practicing medicine, many of her patients came to her for pain relief, and she had little to offer them. Curiosity led her to a nearby school for training in acupuncture.

A few years later, Langevin transitioned to full-time research and began to study how acupuncture needles react to connective tissue.

“I could feel with my hands that something was happening. I felt a resistance to the needle manipulation, and there was no explanation,” says Langevin, who’s now director of the National Center for Complementary Medicine and Integrative Health (NCCIH) at the National Institutes of Health.

Acupuncture has been around for 3,000 years and comes from traditional Chinese medicine, which aims to prevent and treat health issues with mind and body practices. The technique took hold in the U.S. when then-President Richard Nixon opened up relations with China, says Kimberly Henneman, a veterinarian who specializes in performance animals and uses the technique in her practice.

Although not every person (or animal) responds to the technique, you’d be hard-pressed to find a condition that hasn’t been studied in connection with acupuncture, including low back pain, neck pain, knee pain from osteoarthritis, carpal tunnel, infertility, migraines, bedwetting, ADHD, nausea and vomiting.

The body responds to acupuncture depending on where the needle is placed and how the area is stimulated, says Chi-Tsai Tang, a rehabilitation physician in the department of orthopedics at Washington University School of Medicine in St. Louis, MO.

There are also different types of acupuncture. Some techniques relax the muscle and surrounding fascia, a kind of connective tissue. Electroacupuncture, which is commonly used for pain relief, stimulates your body to release its own pain inhibitors, as well as an immune chemical that’s normally released during exercise. Acupuncture also causes the release of local anti-inflammatory chemicals, and some research suggests it might even rewire the brain to produce long-term relief from conditions like carpal tunnel syndrome.

All Creatures Great and Small

Many people might be surprised to learn that acupuncture is also sometimes used on animals. As with people, not all animals respond to the treatment. Likewise, many animals dislike needles so much that it’s not an option. But for some cooperative animals, it works well, saya Henneman: “You will see profound relaxation at the time of treatment, or some will have a little check-out moment, and then all of a sudden, they are very energetic.” 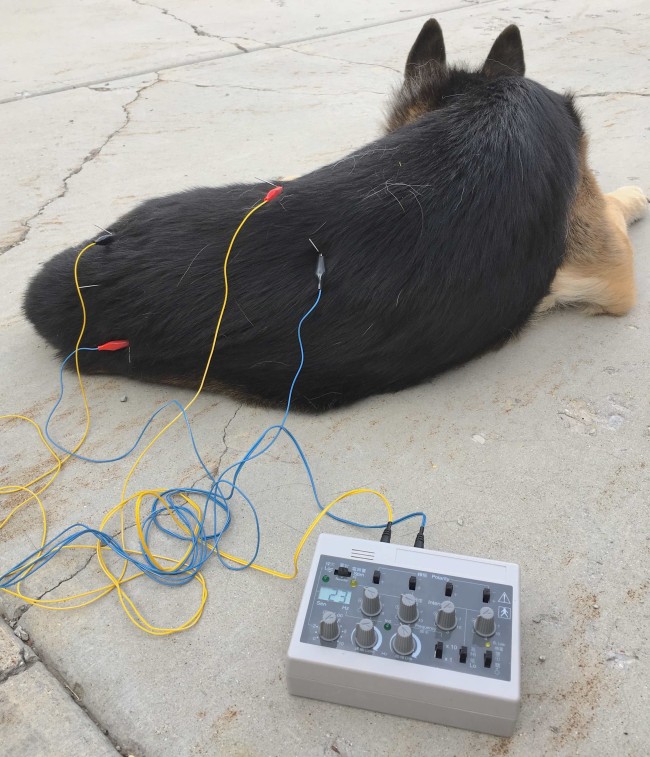 Electroacupuncture in a middle-aged bomb detection dog who was starting to develop back pain and disk degeneration. This was done out on the sidewalk of the handler’s agency while they were both on duty (with the dog unrestrained). It was summer and the dog was most comfortable outside. (Credit: Kimberly Henneman)

When she first started using acupuncture, Henneman says she got a lot of grief from local horse vets. Now, it’s common for veterinary schools to have an acupuncture specialist on staff.

As with the technique in humans, there’s much discussion over where to place the needles, and whether location really matters. If you’re familiar with the charts from traditional Chinese medicine showing an outline of the human body with needles jutting out along anatomical markers, veterinary acupuncture uses similar ancient charts.

The technique has its skeptics in both human and animal practices. Needle placement is only one of the contentious issues. Researchers still haven’t connected the dots between mechanical stimulation of the needle and response to treatment. Previous clinical trials on acupuncture (in humans) often didn’t include enough people and didn’t last long enough, according to Langevin. Acupuncture is also tricky to study in blinded, randomized controlled trials because designing a sham treatment to use on the control groups hasn’t been easy. The feel of the needle going into the skin is distinctive, and both patients and practitioners would know the difference if they were being duped. This makes it easy for both parties to figure out whether they’re in the experimental or the sham group, which could influence results. Complicating matters even more, study participants receiving fake treatments also commonly report pain relief. But whether that’s due to a placebo effect or something else has yet to be sorted out.

“Some of the well-done studies don’t show that true acupuncture is better than sham [treatments] and that’s where a lot of issues come in,” says Tang.

A 2012 review of many studies did show that people who got acupuncture over a control treatment experienced improvements to pain, but the effect was small. The researchers updated their work in a 2017 analysis based on data for more than 20,000 people and found a statistically significant difference between the acupuncture, sham and usual-care groups.

“Ten or 15 years ago, I was one of the people who would have said there’s no difference between real and sham acupuncture,” says Langevin. “Since then, I think what it needed was a lot of data, because the response to acupuncture is variable, and we need big studies to see the effects.”

While the practice has won over a few skeptics, acupuncture is still a controversial treatment in the medical community. Critics say that there aren’t enough solid studies to make the technique scientifically credible and often point to a 2017 review that picked apart a slew of acupuncture trials for a wide variety of conditions. After the review was published, Edzard Ernst — a former professor of complementary medicine at the University of Exeter and critic of the procedure — posted a commentary on his website, writing that “It would be hard to dispute the conclusion that there is no convincing evidence that acupuncture is an effective therapy, I believe.” The website Science-Based Medicine has several posts criticizing the insufficient evidence for the technique, as does Coyne of the Realm.

But if acupuncture does work for pain, the benefits likely come from a combination of things — including the specific needling technique used, the amount of pressure applied on the body and the natural analgesic effects produced, along with other factors. There is also a placebo effect, says Tang.

As to whether it matters where needles are placed on the body, Tang says this aspect is “less important than what people think it is.”

Langevin agrees and says this dogma of acupuncture bugs her: “I have been one of the critics of the notion that there are specific points you are supposed to put the needle.” To help resolve the debate, Langevin is advocating for a reliable database that describes the exact anatomical location of the points, and the anatomical features that needles are interacting with. Such information could help researchers sort out whether there’s really something specific about applying needles to a particular location.

“This thing about the points is dragging the field down,” says Langevin. “It’s been heavily criticized, and if that can get cleaned up it would go a long way to rehabilitate the image of acupuncture as something that’s scientific and rational, as opposed to pre-scientific.”