After more than a decade of detective work, astronomers have found the best evidence yet for what’s causing fast radio bursts, or FRBs. These strange blasts of radio waves, which last just milliseconds, have become one of the most exciting mysteries in astronomy. And, in the end, it appears the prime suspect simply turned itself in.

Magnetars, short for “magnetic stars,” are the highly magnetic remnants of massive dead stars. Astronomers had long suspected these enigmatic beasts could be the source of FRBs. However, there’s only a handful of magnetars known in our Milky Way galaxy, and they all seemed too tame to be causing these extreme signals.

Then, in late April, a magnetar dubbed SGR 1935+2154 started blasting out X-rays near the center of our galaxy, some 30,000 light-years away. As the buzz about this object built, astronomers turned their ground and space-based telescopes in its direction just in time to catch X-rays, gamma rays — and eventually, the blast of a fast radio burst.

The discovery was detailed in a series of three papers published in the journal Nature on November 4.

The new findings have implications beyond our galaxy, too.

“This discovery paints a picture that some — and perhaps most — of these fast radio bursts from other galaxies also originate from magnetars,” Christopher Bochenek, a graduate student at Caltech and study co-author, said in a press conference. 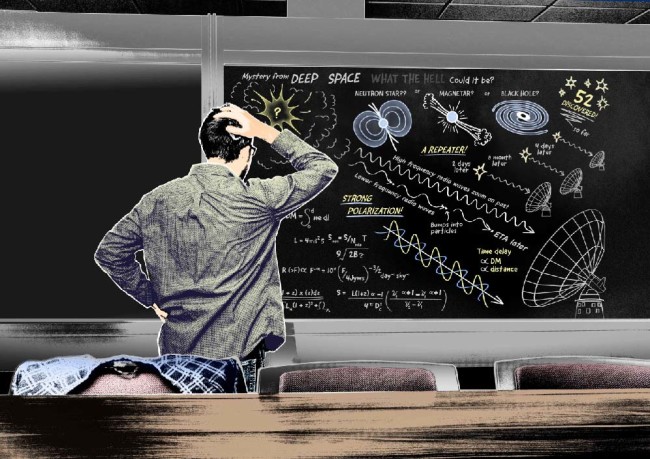 Astronomers didn’t know what to make of the first fast radio bursts, or FRBs. And many scientists were skeptical, speculating that mundane sources like lightning strikes or even microwave ovens created the signal. (Credits, Discover: William Zuback, Roen Kelly, Alison Mackey)

What Are FRBs? The Discovery of Mysterious Signals from the Heavens

The Cause of FRBs

For astronomers, the FRB mystery really began roughly 1.6 billion years ago, when the city-sized corpse of a dead star released a burst of radio waves heading right for Earth.

The blast arrived on July 24, 2001, and it passed over our planet in just five milliseconds, carrying as much energy in radio waves as the Sun does in an entire month. Incredibly, that event went unnoticed until 2006. That’s when a West Virginia University undergraduate student named David Narkevic and his adviser, Duncan Lorimer, discovered the signal hidden in archival data from the Parkes radio telescope in Australia.

This first discovery of an FRB came from so far away that its source was impossible to pin down. Some scientists even doubted it was real until other FRBs popped up in 2013. But ever since FRBs were confirmed, astronomers have been trying to figure out what causes them.

That task has been frustrating because the signals would appear without warning from distant galaxies. They also didn’t seem to repeat. They’d appear once from some distant source and then never be seen again. But in 2017, scientists on the Breakthrough Listen project managed to catch an FRB repeating for the first time in a dwarf galaxy some 3 billion light-years away.

Since then, astronomers have tracked a handful of FRBs back to their homes in other galaxies.

Meanwhile, modeling has helped build evidence that magnetars could act as “engines” for FRBs. As these magnetars flare, they send out blasts of energetic particles. And when those particles accelerate around their star, models suggest they collide with material from previous flares. Such collisions, the researchers think, could trigger powerful shockwaves that have the stunning magnetic properties needed to produce FRBs.

Yet, theory aside, all indications from watching magnetars in our own galaxy implied that these strange stars were far too docile to launch FRBs energetic enough to reach us from other galaxies.

To know for sure, astronomers would have to catch a Milky Way magnetar in the act.

In Search of Our Galaxy’s Magnetic Monsters 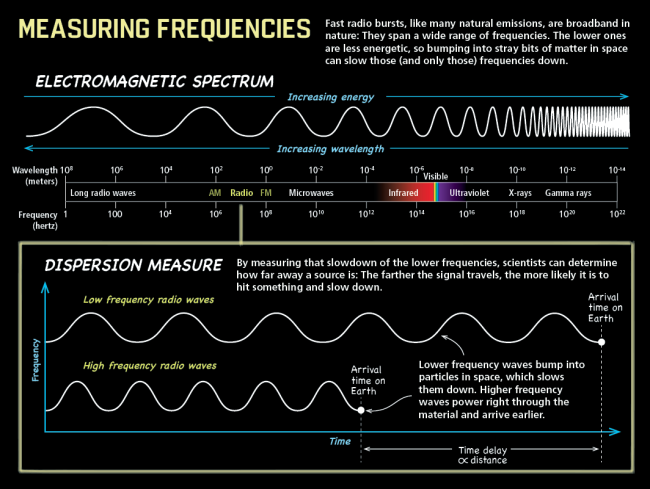 To Catch an FRB

And hunting down Milky Way FRBs is exactly what researchers attempted with the Five Hundred Meter Aperture Spherical Telescope (FAST) in China back in April.

The international team of astronomers used the new, massive, $180-million instrument to keep an eye on the magnetar SGR 1935+2154 in hopes of seeing it produce an FRB. FAST is capable of studying small areas of the night sky and can detect even very faint radio signals. This is what made the FAST team a clear favorite to be first to detect an FRB in the Milky Way. And throughout April, they tuned into the magnetar as other telescopes observed it repeatedly ejecting X-rays bursts.

Then, on April 27, NASA’s orbiting Neil Gehrels Swift Observatory started to detect gamma-rays coming from the magnetar. Astronomers’ models had suggested that magnetars emit such signals just before an FRB. And sure enough, just a day later, a half-pipe shaped radio observatory in Canada called the Canadian Hydrogen Intensity Mapping Experiment caught a glancing blow from an FRB.

They weren’t the only ones to see it, either.

Christopher Bochenek is a graduate student at Caltech. For his observation, he had used cake pans and some steel pipe to construct a radio observatory called STARE2 across three sites in Utah and California. Bochenek was hoping to catch an FRB from inside our Milky Way, but he says his group figured they had about a 1-in-10 chance of actually pulling it off.

“When I looked at the data the first time, I froze and was basically paralyzed with excitement,” Bochenek said. “It took me a few minutes to collect myself.”

It was the brightest radio signal ever detected from within our galaxy. For comparison, the previous record holder for brightest burst of radio waves in our galaxy was a pulsar in the Crab Nebula. This FRB, however, was thousands of times brighter than the Crab’s radio burst, his team reported in Nature.

“This burst was so bright that, in theory, if you had a recording of the raw data from your cell phone’s 4G LTE receiver, which does detect radio waves, and if you knew what you were looking for, you might have found this signal that came about halfway across the galaxy in your cell phone data,” Bochenek said.

Yet his telescope was the only one on Earth to catch the FRB head on. Despite its observations of the magnetar, FAST didn’t detect the actual FRB.

But that raises another intriguing question: Why didn’t the Chinese FAST telescope see this FRB when it’s capable of witnessing signals eight times fainter than either of the other observatories? Researchers think the answer could be that their telescopic gaze was too narrow, so FAST simply missed it.

Whatever the reason, astronomers think there’s something to be learned about FRBs from the fact that FAST was pointed directly at the magnetar yet saw nothing, even as it erupted with X-rays and gamma rays. What exactly is that lesson? Astronomers will have to keep a close eye on the sky to find out.