Reeling from the invasion of small, fuel-efficient foreign cars, the U.S. auto industry is fighting back this fall with the aid of an ingenious Yankee invention: the “computer on a chip,” or microprocessor. With a healthy infusion of tiny silicon chips, Detroit’s 1981 cars will get better gas mileage, give off far less pollution and provide their owners with a remarkable variety of convenient, useful and amusing devices to make driving safer, less expensive and more fun.&#013;

The statistics point dramatically to the auto industry’s growing reliance on microprocessors. Both Chrysler and Ford are quintupling their use of chips, Chrysler from 200,000 during the 1980 model year to 1 million in its 1981 models, Ford from 300,000 to 1.5 million. Some 4 million 1981 General Motors cars will be fitted with microprocessors, up from 400,000 in 1980. By 1985 a fully equipped U.S. car will use an average of 15 chips, compared with less than one in 1978. Says Eugene Karrer, vice president of Ford’s electronics division: “The electronics-automotive wedding is well behind us … and so is the honeymoon.” Robert Templin, chief engineer at Cadillac, is more effusive; he calls the use of microprocessors “the technological breakthrough of the last twenty-five years in the automobile industry.” 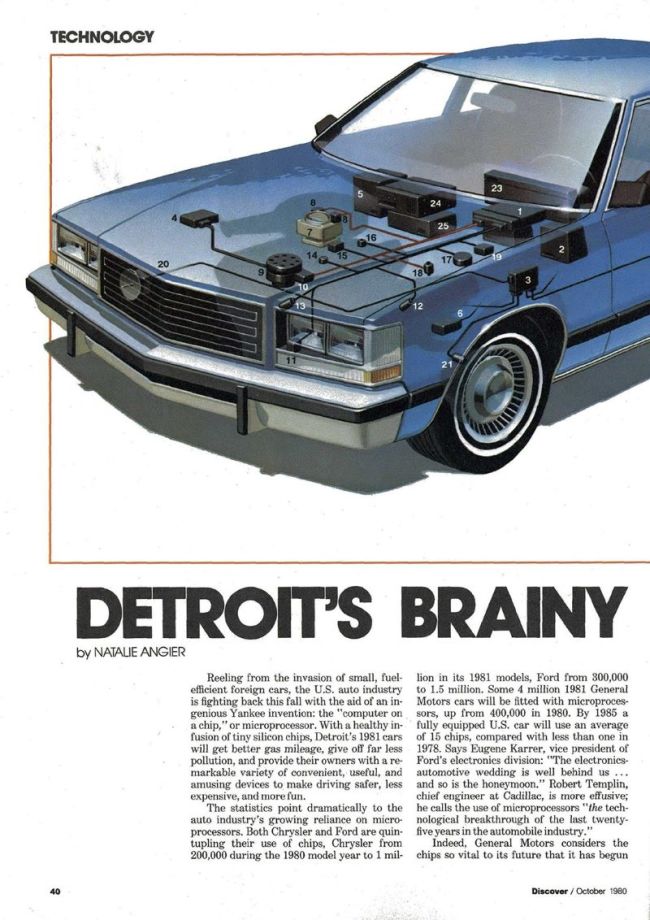 Computers in cars were the next big thing in 1980. Car tech has come a long way in 40 years.

Indeed, General Motors considers the chips so vital to its future that it has begun to manufacture them itself. Delco Electronics, a GM division, now produces its own semiconductor crystals and uses them to turn out 20,000 microprocessors a day. Notes Elliot Estes, president of GM, tongue in cheek: “General Motors is now the world’s largest computer manufacturer.”

Many of the innovations afforded by the microprocessor are immediately obvious to the driver. Radios seek out and automatically tune in on stronger stations as the car travels across the country; they also remember and return on command to any one of eight favorite stations. Should the driver lock his keys in the car, he need only tap out his personal code on a ten-number panel on the window sill of the driver’s door and the “keyless entry system” will open it.

Blue-green fluorescent read-outs tell whether the oil is low or the engine hot, what the temperature is in the passenger compartment and how much farther the car can go on the remaining fuel. They also give the overall average miles per gallon, as well as an instantaneous and continuing update on the miles per gallon at any moment. A “trip computer” calculates and displays such handy facts as the distance remaining to a pre-set destination and the estimated time of arrival, thus providing information for an immediate answer to the question “Are we almost there, Daddy?”

Working with anonymous dedication beneath the gleaming sheet metal are the sophisticated and expensive operational controls that improve the car’s performance. Some half a dozen sensing devices distributed throughout the engine tell the little computer located under the dashboard the engine speed, air and water temperatures, barometric pressure, throttle angle and other crucial data. Armed with this information, the electronic brain consults the “look-up tables” stored in its memory. It then directs two injectors perched atop the throttle body (which on expensive models has replaced the carburetor) to squirt a precise amount of gas. Finally, the chip orders the firing of the spark plugs at the most propitious moment. By keeping the fuel burning at its most efficient rate, the microprocessor allows a platinum and rhodium catalyst to convert the exhaust fumes into harmless nitrogen, oxygen and water without reducing fuel economy.

Manufacturers are racing to let the chips fall where they may. When Chrysler’s “detonation control system” detects a knock, a microprocessor sharply retards the spark timing, then eases it back to normal as the knock disappears. Ford has developed a system that recirculates and burns leftover gasoline in the exhaust for the best economy. The 1981 Cadillac microprocessor keeps tabs on the engine system and notifies the driver when a wire is loose or a sensor is down. This same microchip shuts off fuel to as many as four of the eight engine cylinders when the car is cruising and does not need them, thus saving on gas. (Microchips are highly reliable, but should one fail, mechanical back-ups will keep the car running.) Says Ford’s David Hagen about Detroit’s affair with the chips: “This is one area where the United States is still on top. And we’re going to stay on top.”

That is probably true in the U.S. Foreign manufacturers like Toyota and Nissan (maker of Datsun) are still restricting the microprocessor to simple engine controls in their export models. But at home their cars offer a full line of trip computers, dashboard calculators, advanced fuel-injection systems and even antiskid braking devices, an idea American manufacturers are still experimenting with. In both its domestic and export models, Volkswagen has a chip-regulated fuel-injection system so sophisticated that it eliminates the need for recirculating exhaust gas.

In the U.S. and abroad, auto engineers are seeking new ways to put the chips to work. Transmission controls, radar-controlled braking to avoid collisions and dashboards that flash maps and give advice about how to improve driving habits are all under study. It may not be long before a car is equipped with an electronic voice that cries out when the driver pushes beyond the speed limit. By that time it could be too late; the computer in the policeman’s car a mile down the highway will have already written out the ticket.

Though novel 40 years ago, it’s difficult to imagine a world today without “those clever microprocessors.” These computer chips are in your cellphone, your laptop and, yes, your car — and their computing power has grown exponentially since their creation in the 1970s. 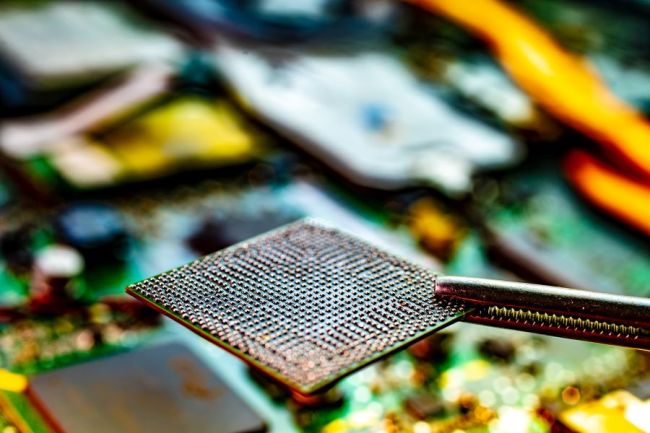 Think of the vehicle features that are commonplace today: anti-lock brakes, backup cameras, electric power steering, even sensors that turn your lights off when you’ve left the vehicle. All these systems use microprocessors to execute their functions. Even if you sought out the most bare-bones car model on the market, you’d find it still has airbags, which are required by law and use microprocessors to determine when they need to deploy in an accident.

Small enough to fit in the palm of your hand, each chip houses a swath of transistors: small pegs that transmit data in the form of electrical signals. The more transistors a microprocessor has, the faster it can move data, and the quicker it can complete a task.

Intel, which created the first microprocessors in the early ’70s, came out with a 16-bit chip in 1978 that housed 29,000 transistors. That sounds like a lot, until you consider that by 2006, a 64-bit Intel chip housed 291 million transistors. And today, we’ve practically lost count, since transistors per chip are now in the billions. For a while, it appeared to scientists that computing power was consistently doubling every two years, a pattern called Moore’s Law.

But engineers are running out of room to cram more transistors onto modern-day microprocessors, causing some experts to question whether Moore’s Law will hold up in the future — or if processing speeds will advance even faster, thanks to new technologies.