The Venetian master’s Bacchus and Ariadne is an iconic portrayal of falling in love. But it could also contain one of the greatest depictions of breaking wind, reveals Kelly Grovier.

You could easily miss it amid the romp and revelry that surrounds Bacchus, the Roman god of wine, as he leaps from his cheetah-drawn chariot after clapping eyes on the beautiful Ariadne: that tiny detail that transforms Titian’s passionate painting of love-at-first-sight into something a little less fragrant.

– The tragedy of art’s greatest supermodel

– The images that fought fascism

The work, inspired by a scene from Ovid’s Metamorphoses, depicts the instant Bacchus’s boisterous posse happens upon a heartbroken Ariadne, abandoned by her lover Theseus on the island of Naxos, and has long been cherished for its sensuous portrayal of ‘the way in which the world seems to come to a stop at the moment when people fall for each other,’ as the art critic Andrew Graham-Dixon has described it. 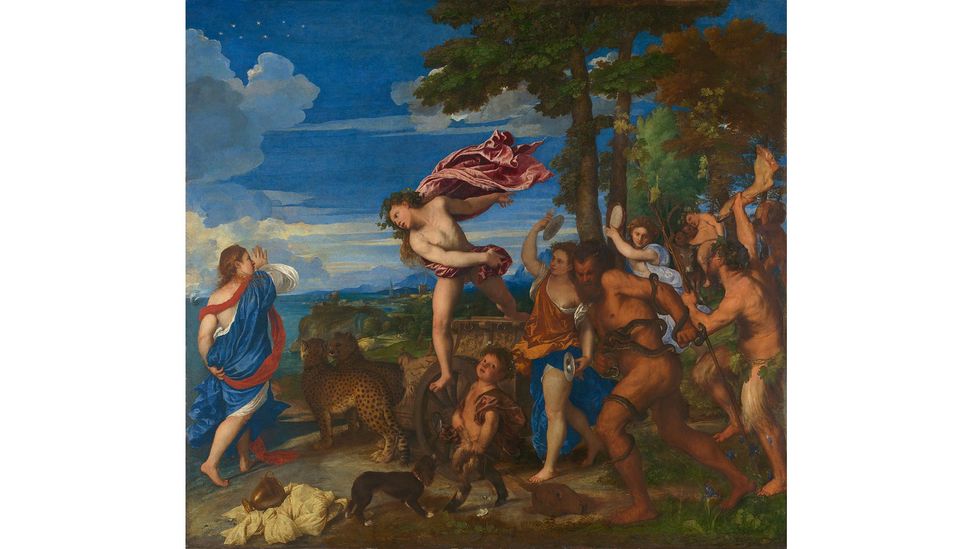 Bacchus and Ariadne depicts the moment when the god Bacchus first comes upon the princess Ariadne on the island of Naxos (Credit: National Gallery)

Smack dab in the centre of his canvas, Titian has carefully, if curiously, positioned a caper flower, whose ivory petals and radiant bristle of exploding stamens are rendered with meticulous botanical detail. Follow the trajectory of the caper’s strangely overextended pistil and it catches in its stigma’s crosshairs the floating crotch of Bacchus, who, blasted from his seat, is frozen forever in mid-air, in what is surely among the most ungainly poses in all of art history.

That the Latin name for the caper flower, Capparis spinosa, is related to the Italian word capriolare (meaning ‘to jump in the air’), is a droll enough visual/verbal play to suggest that Titian is intentionally teasing us with the placement of the prickly perennial plant directly under the bouncing Bacchus. But it is the plant’s medicinal use, since antiquity, as a natural carminative (or remedy for excessive flatulence) that reveals the artist is truly letting rip with some mischievous fun. In the context of Titian’s carefully deployed caper, Bacchus’s explosive propulsion from his seat appears more wittily, if crudely, choreographed by Titian, who demystifies the lovestruck levitation by providing us with a more down-to-earth explanation for the cheeky lift-off. In Titian’s retelling of Ovid’s myth, Bacchus has been hoisted by his own pungent petard, as Shakespeare, who likewise loved toilet humour, might have said.

Famously fond of flatulence himself, Shakespeare couldn’t resist squeezing potty puns into his plays. Hanging in the air behind the phrase ‘thereby hangs a tail’, from Othello, for example, is the lingering whiff of broken wind. Rather than crude blemishes that besmirch his plays’ achievement, however, such coarse scents attest to Shakespeare’s full range of observation, his depth of sensitivity to every clench and contour of being here. They show that, in capturing all of life, Shakespeare holds nothing back (or in) and that his works embrace all of human experience – the serious and the silly, the melodious and discordant, the fragrant and the foul. 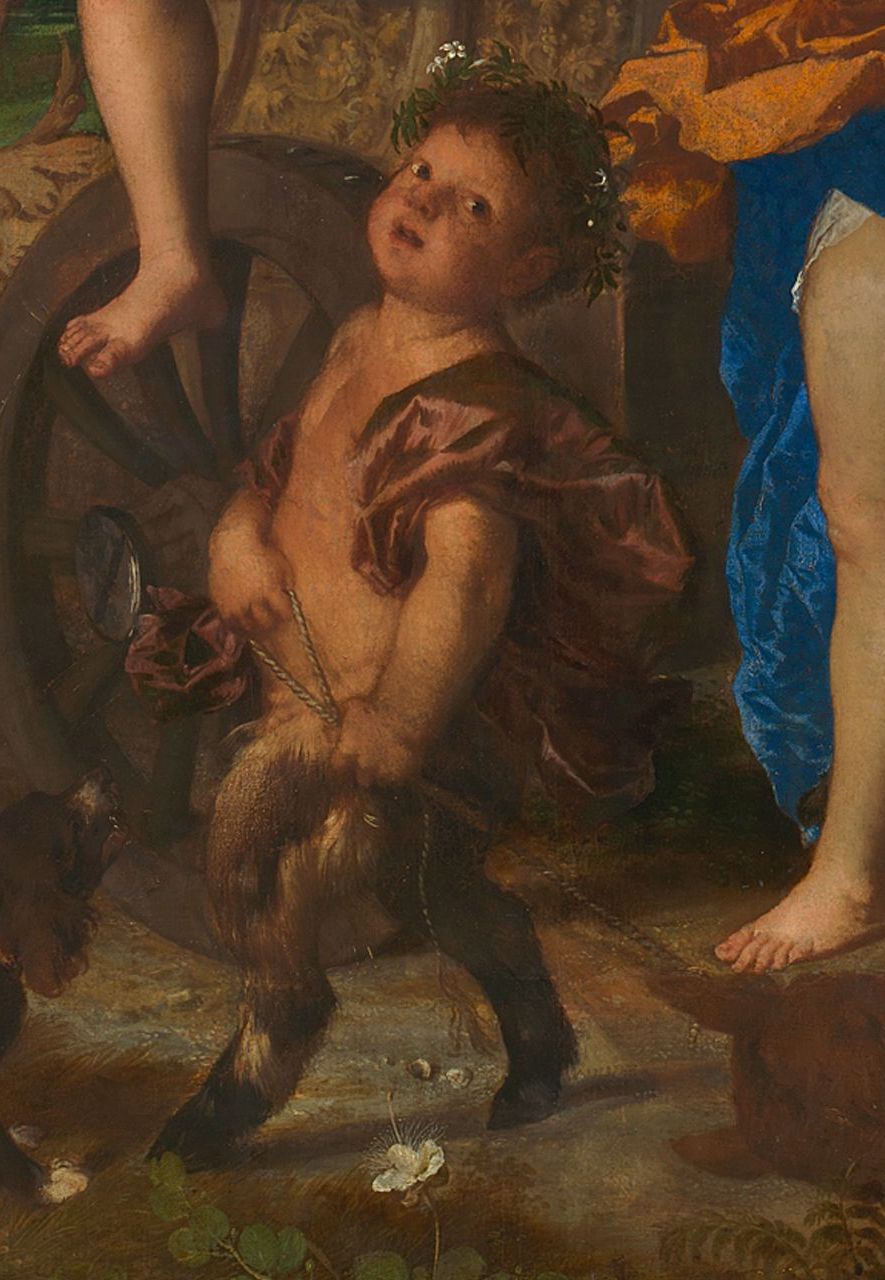 In the centre, a caper flower, which is a natural remedy for flatulence, is coupled with a satyr, a figure also associated with the condition (Credit: National Gallery)

So too with Titian. The 16th-Century Venetian master’s Bacchus and Ariadne, commissioned by the Duke of Ferrara, Alfonso I d’Este, for display in the Camerino d’Alabastro, a private room of his palazzo, is widely revered as an explosion of intense emotion through bold colour. The rich, rippling crimson of Bacchus’s drapery and the lush ultramarine of Ariadne’s cloak seem magicked from a purity of pigments powderised by the gods themselves. But what truly makes the scene so urgent and powerful is its heightened awareness of all the textures of this, the world we share with those mythic beings – a realm of rich hues, musical merriment, drunken delirium, and, yes, appalling pongs.

If you doubt that Titian in his day would have been alive to the importance of an odiferous dimension to Ovid’s vision, compare the painter’s visual portrayal of Bacchus and his half-cut crew with a verbal illustration of the same rambunctious retinue by his exact contemporary, Francois Rabelais. The fifth and final book of the French Renaissance writer’s magnum opus, The Life of Gargantua and of Pantagruel, describes at length the discovery in a temple of a mosaic that features Bacchus and his gang. “The satyrs, captains, sergeants, and corporals of companies, sounding the orgies with cornets, in a furious manner went round the army,” Rabelais writes, melting the artwork into language, “skipping, capering, bounding, jerking, farting, flying out at heels, kicking and prancing like mad…”

Mapping Rabelais’s verbal description onto Titian’s canvas, one sees that the elements are all there — the skipping and bounding, the jerking and kicking, the flying at the heels and prancing like mad, and, indeed, even the capering and farting. In order to follow the trajectory of the caper’s distended pistil to the buoyant bottom of Bacchus, our gaze must first bisect the legs and groin of an impish satyr, just above the flower, who glances knowingly our way. Given the satyr is often linked with flatulence in classical literature (Sophocles said they ‘boasted of their farting power’), the interposition of one here is telling. 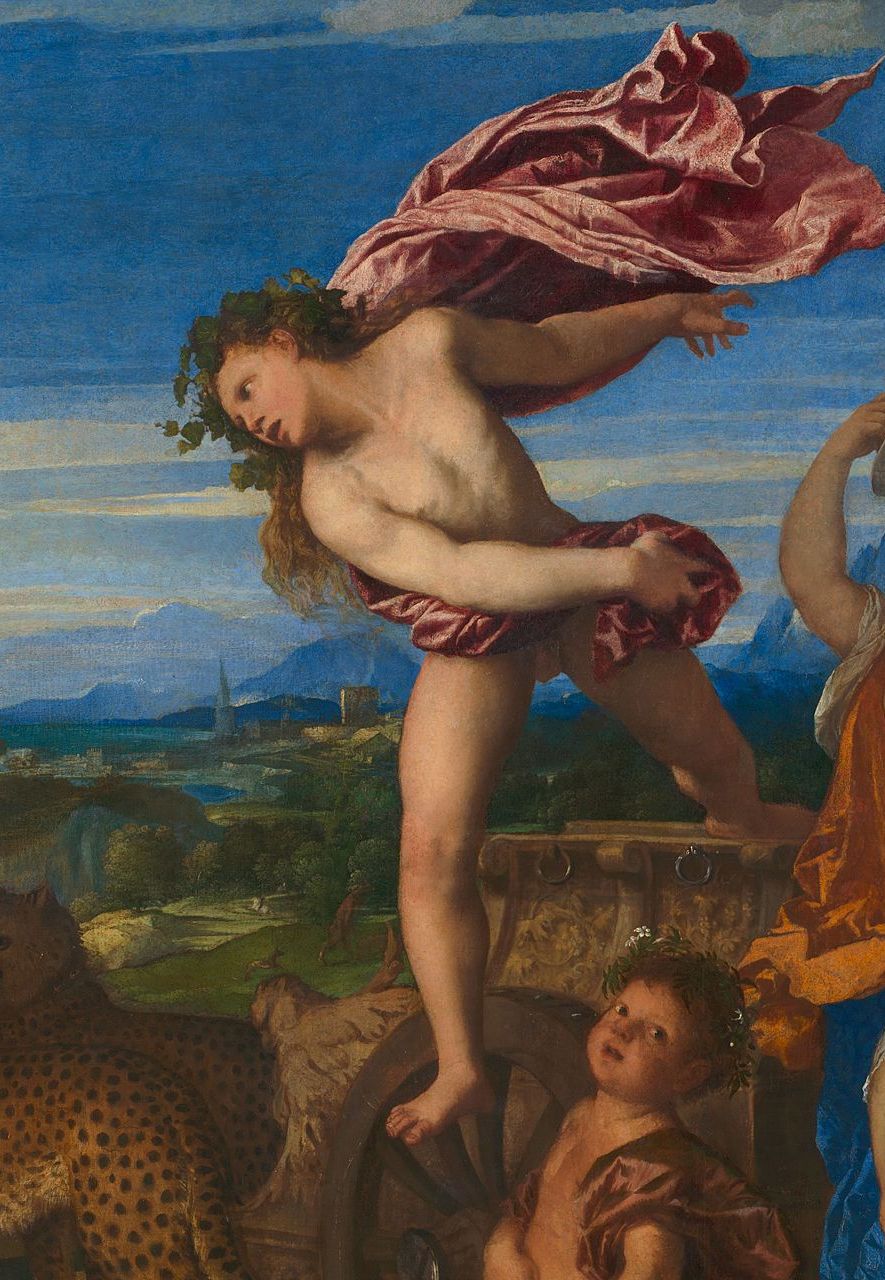 Bacchus appears frozen in mid-air, blasted from his seat – but is this the result of love or is there a more down-to-earth explanation? (Credit: National Gallery)

Once detected, a leitmotif of broken wind rumples the work’s fabric and even begins to envelope the painting’s leading lady herself. In the traditional interpretation of the story that Titian is telling, Ariadne, who has been watching the ship of the lover who abandoned her disappear, is taken by surprise by the arrival of Bacchus and his reprobate posse. Caught off-guard by Bacchus’s beauty, so the story goes, she pivots clumsily to meet his gaze. But it is the inelegant backward fumble of Ariadne’s left hand, which seems to have gathered a fistful of cheek in its awkward rotation, that suddenly waylays our eye. In the lewd light of the ripening trope of whiffiness, the upward waft of a twisting ribbon of fragrant rose fabric that rises from Ariadne’s posterior is impossible to unsee. The gags are everywhere. Titian’s painting is more than merely an elevated and exquisite mediation on the flex and fire of infatuation, it’s a rude and rawdy whoopee-cushion for the eyes.

Am I alone in suspecting there may be as-yet undetected layers of sensory play in Titian’s paintings – that they are indeed intended to engage each and every one our faculties? “When you look at Titian’s paintings, he appeals to your sense of touch, especially, but also your sense of hearing and smell,” says Matthias Wivel, Senior Curator at London’s National Gallery, who has organised Titian: Love, Death, Desire, its current exhibition devoted to a series of six late works that the Venetian master created in the 1550s and 60s. “He’s very keen on activating all your senses and it’s just more immediate when it’s visual than when you read it in Ovid, I think. But it’s a very similar effect in that it activates our senses.”

A prototype for his genius

Titian: Love, Death, Desire, summons a suite of canvases that the artist referred to as his ‘poesie’, for the lyrical quality he believed they shared with classical verse. The show offers a truly once-in-a-lifetime opportunity to see together in one place such masterworks as Danae, Venus and Adonis, Perseus and Andromeda, Diana and Actaeon, Diana and Callisto, and The Rape of Europa. Not even Titian himself would have ever seen them all side-by-side. Bacchus and Ariadne, painted decades earlier when a young Titian was still establishing his reputation, is not a part of this display of mature achievement. But it hangs in a nearby gallery as part of the museum’s permanent collection and shines a focused light on these later works as a kind of prototype for their intensity, ambition, and scale. 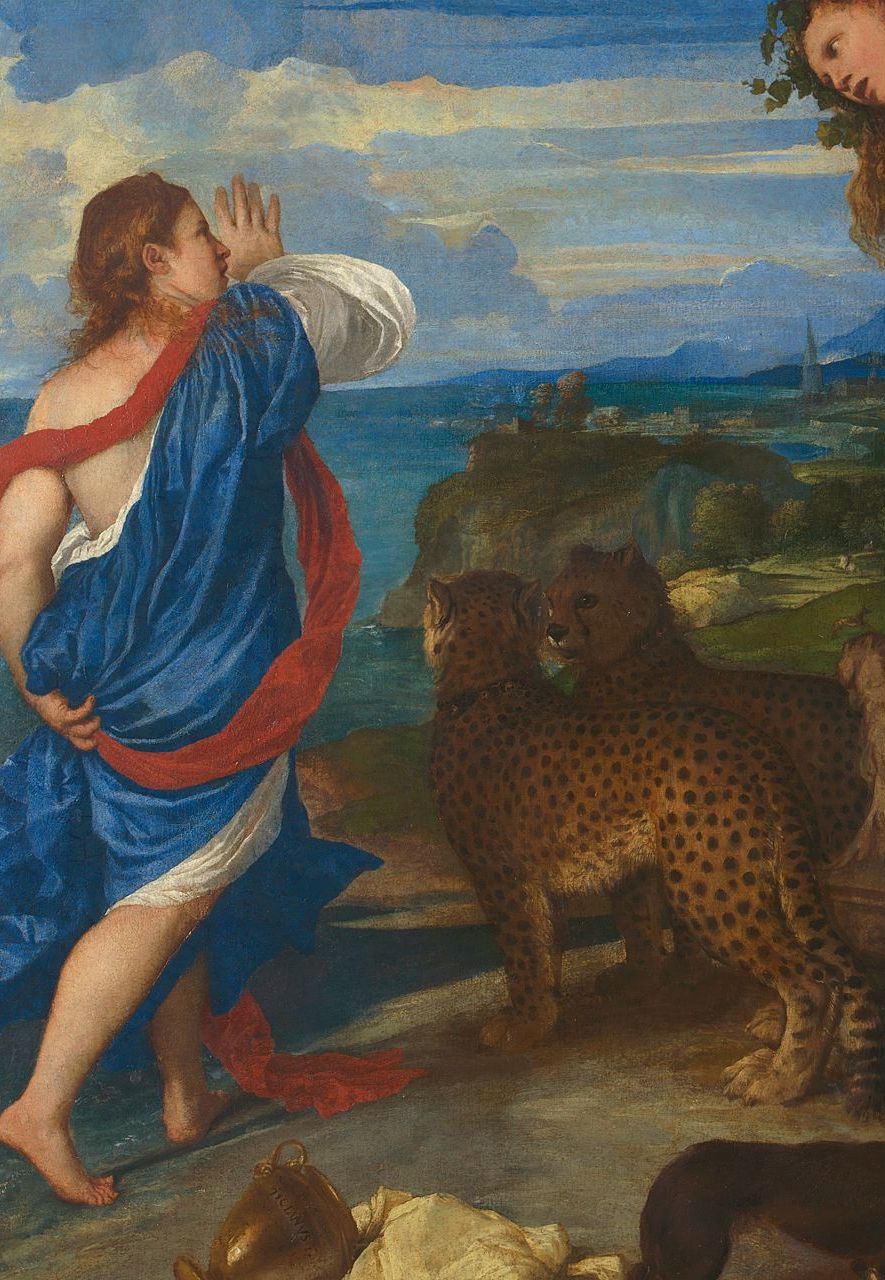 The painting’s windy goings-on seem to continue to the leading lady Ariadne, whose clothes appear disturbed by a waft (Credit: National Gallery)

“Even though there are about 30 years separating them”, Wivel says, describing the relationship between Bacchus and Ariadne and the half dozen mature paintings that comprise the show “a lot of what you see in the poesie is already there in Bacchus and Ariadne: the way he paints, the way he appeals to our senses, the way he uses tactility. When you see them next to each other your first reaction is to say that there is quite a big difference in how they’re rendered. But when you get closer, you can see how absolutely logical that development is – how it’s really it’s a development of the same approach. It’s not radically different. There’s a natural evolution of his style.”

Though Titian may not tuck a caper flower, with all its complexities of ambiguous aroma, into every one of his works, these later paintings repay close attention for their own overlooked details that enrich the tapestry of the stories they weave. “You notice all kinds of small things”, Wivel says, of the advantage of having these canvases gathered together side-by-side, “how they form an overall thematic unit in a way. It’s sort of obvious but it’s not just that they’re all stories from Ovid or they all deal with dramatic twists of fate and eroticism and so on. The way they become a meditation on nature for me has been very strong.” This is “Titian at his best”, Wivel says. What is it, exactly, that he feels Titian brings to the telling of Ovid that continues to resonate age after age? Again the analogy is to Shakespeare: “they’re interested in many of the same things, because they’re interested in emotion, ” Wivel insists. “They’re interested in the things that make us human – that we can’t quite define or control.”