(Inside Science) — The Americas may have been home to humans for more than 12,000 years longer than previously thought, new research finds.

The arrival of humans to the Americas from Asia marked a major step in humanity’s journey across the globe, but the exact timing of this entry remains hotly debated. Based on stone tools dating back about 13,000 years, archaeologists long thought the first Americans were part of a prehistoric culture known as the Clovis. However, scientists have recently uncovered many sites that suggested humans were in the New World before Clovis, up to roughly 18,000 years ago. Now new studies extend that time to more than 30,000 years ago.

In the new work, researchers focused on Mexico, which is typically on the periphery of the hunt for the first Americans, given its distance from the Bering Strait and Beringia, the landmass that had connected Asia and North America. However, recent findings have unearthed hints of an ancient human presence in Mexico.

The scientists investigated Chiquihuite Cave in the Astillero Mountains of central Mexico, the most promising of dozens of sites they explored in the region. They spent a number of winters excavating a 3-meter-deep pit 50 meters from the cave’s mouth. They lived inside the cave for seven to nine weeks in a row during the winters, cooking in the area and sleeping meters away from the dig while wary of drug cartels said archaeologist Ciprian Ardelean at the Autonomous University of Zacatecas in Mexico.

Ardelean and his colleagues unearthed about 1,900 stone artifacts. Radiocarbon and optically stimulated luminescence dating of the objects suggest humans might have occupied the area 31,000 to 33,000 years ago. Given how far away Chiquihuite is from the coasts, much less Asia, the researchers suggest humans may have first arrived in the New World during a period 29,000 to 57,000 years ago. They detailed their findings in two studies in the July 23 issue of the journal Nature. 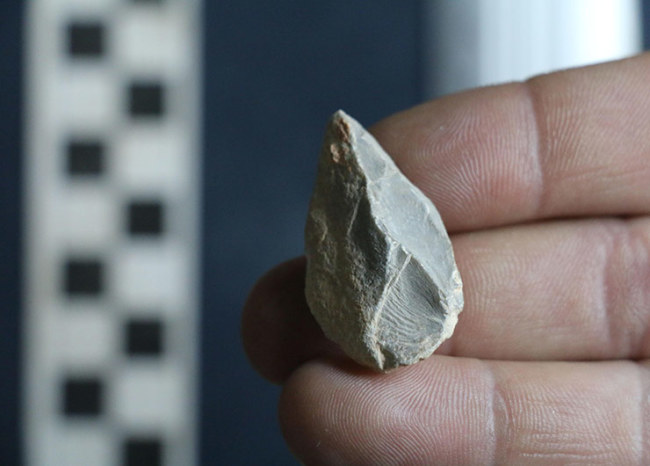 Stone tool found below layer dated to the Last Glacial Maximum, which may indicate that people lived in the Americas earlier than thought. (Credit: Ciprian Ardelean)

These newfound artifacts show a tool manufacturing style, or “lithic industry,” never previously known in the New World. “Actually, all pre-Clovis sites in the Americas have lithic industries that don’t match each other,” Ardelean said. “This seems to be the norm.”

The cave is located roughly 2,740 meters above sea level (nearly 9,000 feet), almost on the top of the highest mountain in the region. Archaeologists looking for ancient sites in the New World typically focus on lake shores, rolling hills and other areas that we might find comfortable, Ardelean said. “I wanted to search for sites in all sorts of locations, even where we wouldn’t go to live as modern people. The ice age was a different world, with different minds and psychologies, more courageous than ours. They were adapted to mountains, and for them, it must have been just normal.” Although the area is now part of the southernmost section of the giant Chihuahuan desert, it was more like the Pacific Northwest during the last ice age, Ardelean said.

“We anticipate that the results will spur new interest in surveying regions like this for new sites,” said archaeological scientist Thomas Higham at the University of Oxford in England, a co-author on both studies. The fact that a high-altitude site such as Chiquihuite “contains earlier human presence will invite archaeologists to widen the places they seek to look for early archaeological sediments.”

When the scientists examined the age of Chiquihuite and 41 other archaeological sites in North America and Beringia, their computer model suggested humans were likely present in the Americas before, during and immediately after the Last Glacial Maximum — the period around 19,000 to 26,500 years ago when the ice age was at its peak and glaciers covered roughly one-third of Earth’s land. During such early times, a land passage to the New World would have been blocked by either treacherous open water or impenetrable ice sheets, suggesting “the path humans took to the Americas was likely a coastal route,” Becerra-Valdivia said.

“It changes our comprehension of the settlement of the Americas considerably,” said bioanthropologist Mark Hubbe at the Ohio State University in Columbus, who was not involved in this work. “There have been a few sites in South America that have claimed earlier human occupations, but most of them have been largely dismissed because of a combination of unreliable evidence and the fact that they were such chronological outliers that it is more parsimonious to assume the dates were wrong. It is nice to see that we are broadening our perspective and allowing for the possibility that the Americas may have been occupied significantly longer than we ever thought possible.”

Archaeologist John Hoffecker at the University of Colorado at Boulder, who did not participate in this study, noted that “for more than a decade and half, evidence of people in Beringia before the end of the Last Glacial Maximum has been accumulating,” lending credence to a possible ancient human presence in Mexico. Still, “it continues to strike me as odd that, if people were present in the Western Hemisphere outside eastern Beringia at this earlier time, the evidence for their presence is so sparse, because at this time in northern Eurasia, people are all over the place, occupying large sites with abundant artifacts, many features, and heaps of food debris.”

However, sparse evidence of humans in the New World during the last ice age “is not surprising; the harshness of the Last Glacial Maximum would have kept populations low, leaving little trace behind for archaeologists to discover in the future,” Becerra-Valdivia said. “Once a warming period began, humans were then able to thrive and expand across the region.”

Ardelean cautioned that scientists still need to discover more similarly early sites to confirm a human presence in the New World during or before the Last Glacial Maximum. “The evidence is still very scarce and blurry,” Ardelean said. “Chiquihuite is simply a very dim light in a vast darkness ignored so far.”

Future research can investigate how related or not these ancient Americans were to later groups. “Did they contribute to form Native Americans, or were they an unsuccessful attempt to occupy the continent that was later replaced by the ancestors of Native Americans?” Hubbe said.

“We need to start exploring underwater sites, as has recently been done in Australia,” added geographer Umberto Lombardo, who did not take part in this research. A research program taking hundreds of core samples along the coasts of North and Central America would cost a lot, “but it could be done by a large consortium of universities.”

Charles Q. Choi is a science reporter who has written for Scientific American, The New York Times, Wired, Science, Nature, and National Geographic News, among others.

This story was published on Inside Science. Read the original here.