The tallest mountain on any of the Solar System’s planets is Olympus Mons, a giant extinct volcano on Mars that is some 14 miles (or 21.9 kilometers) high. That’s about two and a half times the height of Mount Everest. This behemoth formed some 3 billion years ago when the Red Planet was peppered with volcanoes spewing vast quantities of magma across the Martian planes.

Since then, Mars has cooled and become much less active. Indeed, a common view among planetary geologists is that today there are no active volcanoes on Mars. 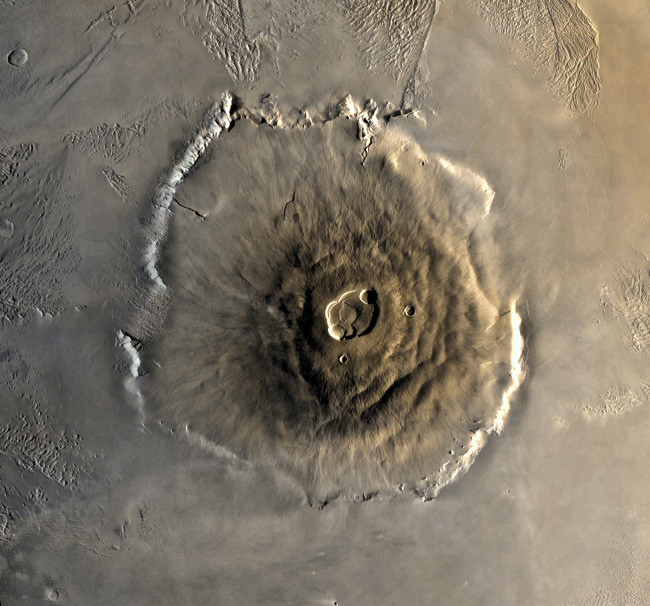 Now that view may have to change thanks to the work of David Horvath at the University of Arizona in Tucson and colleagues. This team has analyzed a region of Mars called Elysium Planitia which is pockmarked by a set of semi-parallel fissures called Cerberus Fossae. The team says that one of these fissures appears to be less than 200,000 years old — and possibly as young as 50,000 years old.

That makes them the youngest volcanic features yet discovered on Mars. “This young age implies that if this deposit is of volcanic origin, then the Cerberus Fossae region may not be extinct and Mars may still be volcanically active today,” says Horvath and colleagues. That has significance for the possibility of liquid water there — and even the potential presence of life.

First, some background. Planetary geologists have long thought that the Cerberus Fossae fissures must have formed in lava plains as they cooled and deformed. They can determine a rough age for these plains by counting the number of impact craters, which suggests the region is between 500,000 and 2.5 million years old — relatively young in Martian terms.

These images suggest an eruption has spread lava over an area some 5 kilometers long, to a depth of about 10 centimeters. And the lack of craters suggests all this happened recently, perhaps just 50,000 years ago.

In geological terms, that is brand new. “The Cerberus Fossae mantling unit is interpreted to be the youngest volcanic product discovered on Mars to date,” says Horvath and colleagues.

There is another line of evidence that suggests this region could still be active. In 2018, NASA placed a robotic lander called InSight on the Martian surface carrying seismic equipment to monitor Marsquakes. 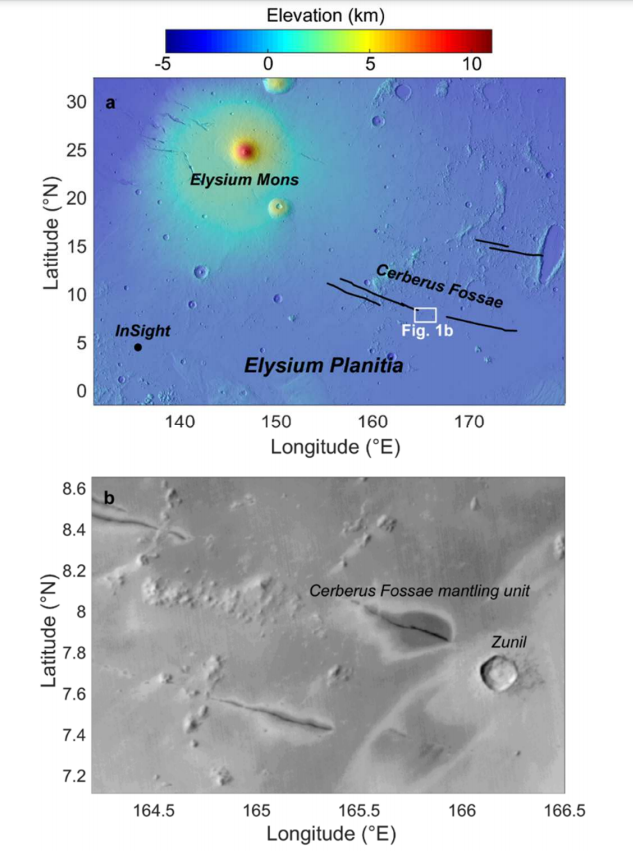 The spacecraft landed in the Elysium Planitia, about 1,700 kilometers from the Cerberus Fossae mantling unit. Last year, the lander measured two Marsquakes that originated in this area. On Earth, that can suggest volcanic activity. “The only two locatable Marsquakes detected by InSight were sourced from the Cerberus Fossae region, supporting the possibility that this region remains magmatically active today,” says the team.

That has important implications. Volcanic activity can melt any frozen water in the Martian soil. “Melting of ground ice and hydrothermal circulation could generate favorable conditions for recent or even extant habitable environments in the subsurface,” says Horvath and colleagues. “These environments would be analogous to locations on Earth where volcanic activity occurs in glacial environments such as Iceland, where chemotrophic and psychrophilic bacteria thrive.”

That might interest astrobiologists. On the other hand, volcanism might provide a more mundane explanation for an observation that has excited them for many years — the discovery of low levels of methane in parts of the Martian atmosphere.

On Earth, methane is produced by volcanoes but also by algae and cows farting. It is widely thought of as a potential biomarker. That was interesting for astrobiologists when Mars was thought to be volcanically inactive. If that has changed, the methane suddenly becomes much less interesting.