When the 60-year-old Arecibo Observatory collapsed in 2020, the crash didn’t just take down one of the world’s preeminent radio telescopes, it also dealt a massive blow to the future of radio astronomy. Arecibo may have been old, but it also had unique capabilities that made it ideal for studying things like gravitational waves, as well as mapping the surfaces of asteroids as they slip by Earth.

Now, radio astronomers around the world are debating what comes next. Should Arecibo be rebuilt anew? If so, where would the money come from?

Those questions don’t have easy answers, but the discussions are happening. Preliminary plans for another revolutionary radio telescope continue to inch forward every day. And interestingly, these talks have led NASA to reconsider a bold idea that was first dreamed up a half-century ago: building a behemoth radio telescope on the farside of the Moon.

Arecibo’s design benefited from being built in a natural sinkhole in Puerto Rico. Similarly, astronomers could use existing lunar craters to build a radio telescope on the Moon for (relatively) cheap; impacting space rocks have already done the digging for them. And unlike Earth, the Moon has no weather or wind to accelerate erosion. Even the pull of gravity itself is weaker on the lunar surface.

Arecibo on the Moon 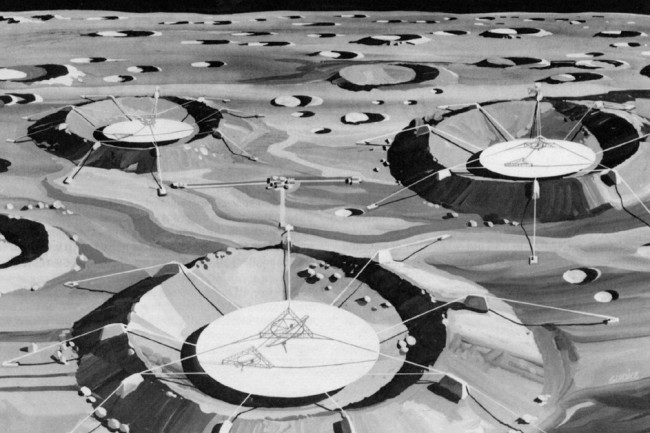 A decades-old idea from lunar scientist Richard Vondrak, who worked at the Apollo Science Operations Center during the moon landing program, proposed using lunar craters to build radio telescopes like the Arecibo Observatory in Puerto Rico. Here, an artist’s concept shows how three telescopes could be used separately or combined to create a giant instrument. (Credit: Courtesy NASA)

As early as the 1960s, astronomers wanted to build a radio telescope on the farside of the Moon. That’s because the lunar farside always faces away from Earth, which means the entire Moon acts as a sort of shield that blocks Earth’s cacophony of outgoing radio noise. This creates an environment where scientists could theoretically observe the universe in wavelengths that can’t be easily analyzed from our planet — or even in orbit.

An Arecibo on the Moon would be more than a replacement, though. The premise is similar to the way astronomers decided to replace the Hubble Space Telescope. Rather than replicating the original, the community embraced the idea of building something entirely different. The James Webb Space Telescope (JWST) used insights gleaned from Hubble’s tenure, sure. But JWST was specially built to study the universe primarily through infrared light, while Hubble focuses on visible and ultraviolet light. That spectral shift means JWST will be able to investigate previously unexplored aspects of the universe with impeccable detail.

The same is true of building a large radio telescope on the Moon. While Arecibo dedicated a half-dozen decades to studying radio waves at the centimeter- and millimeter-scale, a lunar radio telescope could monitor wavelengths larger than a meter, something astronomers can’t do from Earth.

If an Arecibo-like observatory was built on the Moon, it could potentially spot many exotic cosmic phenomena, such as auroras around distant Earth-like exoplanets. Most alluringly, it could even pick up radio signals from the earliest days of the cosmos, before the first stars and galaxies were born. 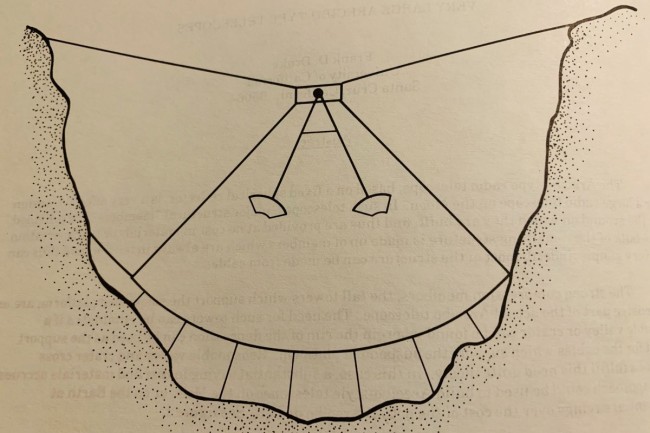 A 1986 proposal suggested a system of cables suspended inside a lunar crater could let astronomers construct an Arecibo-style telescope on the Moon. (Credit: NASA)

Frank Drake, a world-renowned astronomy, even once pitched the idea for a “Very Large Arecibo-Type Telescopes” on the Moon at a NASA conference in 1986. Drake reasoned that utilizing a lunar crater would minimize the need to build large structural elements. Some panels, platforms, and a slew of cables might suffice, he suggested.

The Moon also holds so many craters that it should be relatively easy to find one with a sturdy enough rim that it can serve as the anchor point for the telescope’s support cables. This would avoid the cost of the expensive towers that anchored cables at Arecibo. (In fact, the telescope collapsed in 2020 after the cables attached to its towers failed.)

“Reasonable valley and crater cross sections fulfill this need quite nicely,” Drake wrote. “In this case, a substantial saving in cost and materials accrues. This approach could be used to build Arecibo-style telescopes on the Moon or on the Earth at substantial savings over the cost of the actual Arecibo design.” 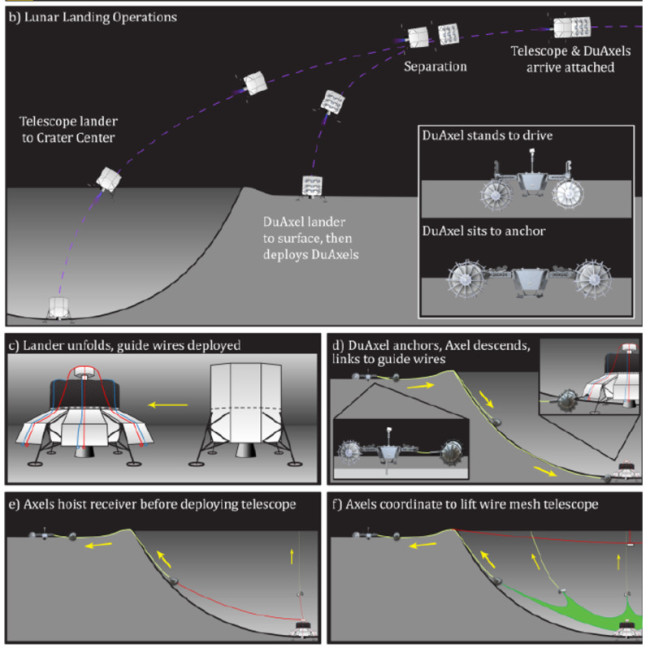 An artists’ concept of how robots would build the Lunar Crater Radio Telescope. (Credit: Saptarshi Bandyopadhya)

In recent years, NASA has shown support for these ideas at levels never seen before. The space agency has even funded studies on several early proposals to finally build an Arecibo-like observatory on the Moon. Of these proposals, the Lunar Crater Radio Telescope (LCRT) echoes some of the same ideas Drake brought up a generation ago.

But unlike previous mission designers imagined, the latest iterations of Moon-based telescopes wouldn’t rely on astronauts to construct them. Saptarshi Bandyopadhyay, a robotics technologist at the Jet Propulsion Laboratory and leader on the LCRT project team — says they intend to build LCRT using simple lunar rovers like the ones NASA has already designed.

LCRT would land a spacecraft full of rovers outside the crater. These would then retrieve the support wires, take them to the crater rim, and assemble a mesh system spanning approximately 0.6 miles (1 kilometer). However, the whole system would have to fit inside a single lunar-landing spacecraft, like Blue Origin’s Blue Moon.

By depending on robots instead of astronauts, the project can save a significant amount of money. Any mission involving astronauts requires extensive — and expensive — safety precautions. Every potential problem requires extra scrutiny and engineered safeguards. For example, sharp edges can slice through spacesuits, so they’re avoided on crewed flights. But rounded edges don’t allow you to maximize cargo space, which you’d want to do for a robotic trip to the Moon.

NASA has also already begun testing a versatile model of a rover called DuAxel, which could be used for a number of different lunar missions. Among other things, DuAxel can climb crater walls. And as a bonus, it’s relatively cheap.

“If we send 10 of these robots and two of them die; it’s fine,” Bandyopadhyay says. “Two of them are dead, but eight robots are still working. It’s not like that with astronauts.” 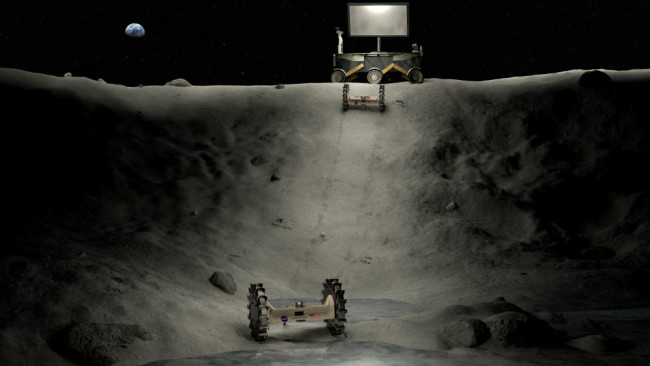 A rover operates inside a lunar crater in this artist’s concept. (Credit: NASA)

However, even with all the potential advantages of robotic builders, the current cost of the technology likely puts the mission out of reach. SAPART estimates that building a radio telescope on the Moon would cost billions of dollars. That’s why his team is trying to develop new kinds of cables and mesh that would be dramatical cheaper to use than what’s available now. LCRT’s initial study relied on $120,000 of NASA Innovative Advanced Concepts (NIAC) project funding to investigate the concept. And the next stage of their mission plan would let engineers get to work on developing the mesh. By spring, Bandyopadhyay says, his team hopes to publish their initial results.

“We have a good first design now that makes sense and that we could potentially fly,” he says. “If you gave us four or five billion dollars we could launch it tomorrow.”

But despite the enthusiasm, Bandyopadhyay isn’t optimistic we’ll see an Arecibo-style telescope on the Moon in the near future. After all, science tends to be slow.

“I would be very surprised if I see LCRT deployed before I retire, and I’m a very young scientist,” Bandyopadhyay says. “These things are hard. These questions we are trying to solve are hard. And the science windows these questions will open are hard. Everything is hard. If it was easy, we would have done it already.”