Flash Gordon came out 40 years ago – and has gained cult status since. Its director Mike Hodges talks to Nicholas Barber about how he balanced earnest grandeur with tongue-in-cheek humour.

Every science-fiction fan knows the story. In the early 1970s, George Lucas wanted to make a Flash Gordon film, a big-budget update of the 1936 Saturday matinee serial with Buster Crabbe. But he was turned down by King Features, the publishing company that held the rights to the character, so he went away and wrote his own space opera instead: Star Wars. In retrospect, it might not have been the best business decision that King Features ever made.

More like this:
– The most outrageous film ever made?

– The film that exposed our misogynistic culture

Not only did we get Lucas’s unauthorised Flash Gordon homage, Star Wars, but we also got a separate, authorised Flash Gordon film, directed by Mike Hodges, which came out 40 years ago in 1980. The two have a lot in common. In both films, an intrepid blonde hero joins rebel forces against an evil empire, a beautiful princess is tortured, and a masked villain has an all-black wardrobe. But in other respects, Flash Gordon and Star Wars are in galaxies far, far away from each other. 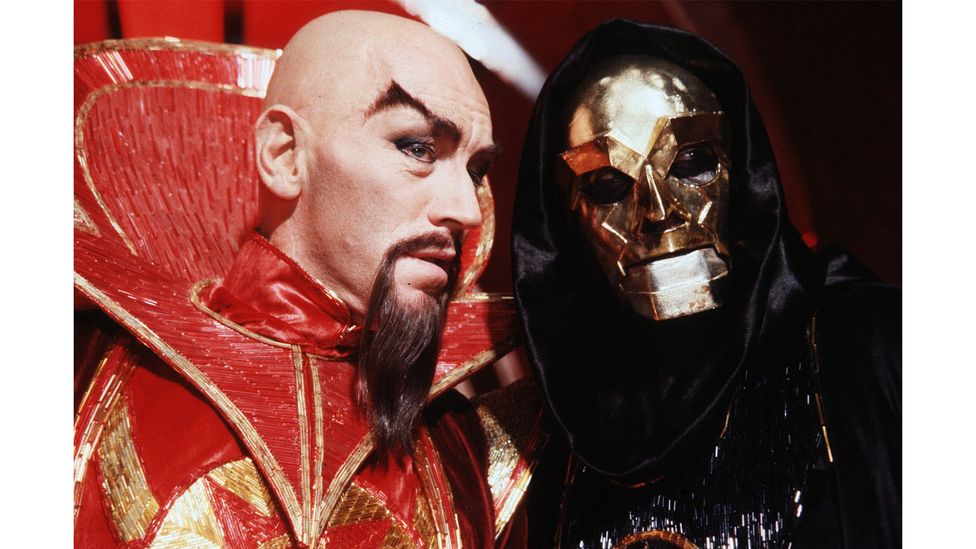 Brian Blessed recently called the film “an absolute masterpiece”, telling SFX “the most important thing that ever happened in my life is this expression, ‘Gordon’s alive!'”

Replacing the mysticism of Star Wars with exuberant, tongue-in-cheek fun, here was a film with the retina-frazzling brightness and swashbuckling flair promised by its title character’s name. True, Flash Gordon didn’t make anything like as much money as Star Wars did. And some of it crosses the line from knowingly cheesy to just plain cheesy. But it stands up as a pop-culture extravaganza that can be enjoyed both as a rip-roaring pulp adventure and a parody of a rip-roaring pulp adventure.

Flash Gordon has been enshrined as a camp classic, beloved of such directors as Taika Waititi, who is developing an animated version, and Seth MacFarlane, who paid tribute to it in Ted and Ted 2. “It’s the overnight hit that took 40 years,” says John Walsh, the author of Flash Gordon: The Official Story of The Film, which is published by Titan Books in October. “In 1980, if you’d just seen Superman and The Empire Strikes Back, you would have been underwhelmed by the flying and the other special effects. But time has been kind to Flash Gordon. Once you stop obsessing over the technical aspects, you can see that it was meant to be quite stylised, and the energy very much comes through.”

What made the film unique were the personalities of its producer, Dino De Laurentiis, a legendary Italian-American movie mogul who died in 2010, and Hodges, a British director known for his moody gangland drama, Get Carter. Initially, De Laurentiis had hired Hodges’ friend Nicolas Roeg, the psychedelic visionary behind Don’t Look Now and The Man Who Fell to Earth. But he asked Hodges if he would be interested in directing the sequel – assuming there was one. “I told Dino that I was completely the wrong director,” says Hodges, speaking to BBC Culture on the phone from his home in Dorset. “I knew nothing about special effects, and I knew nothing about American comics. I was more into The Dandy and The Beano.”

Hodges recently told Radio Times: “There’s a certain look to strip cartoon characters… You had to find an actor who had this kind of innocence. And Sam had it.”

After a year of pre-production, though, De Laurentiis fired Roeg, whose ‘mythical’ take on the character was too far from the Saturday serials he adored, and he came back to Hodges “for reasons I’ve never understood”. Four decades on, the 88-year-old Hodges is still grateful. “The BFI arranged a big screening at the British Museum in 2014,” he says. “I was just going to introduce it – Brian Blessed was there, so I really shouldn’t have bothered – but I ended up sitting and watching it all the way through. I had a great time. The way it looked on the big screen was amazing.”

This was especially satisfying, says Hodges, because when he started work on the film, he “honestly thought that it would never see the light of a projector”. Indeed, he had no idea where to begin until he was flying across the Atlantic for a meeting with De Laurentiis in New York. “It was the first time I’d been on Concorde. Once we were in the air, all the businessmen opened their briefcases and took out their computer read-outs. I took out my Bumper Fun Book of Flash Gordon Comics. They all thought I was mad, because they were working and I was reading my Bumper Fun Book, but I had to tell myself, hang on a second, I am working, actually.” 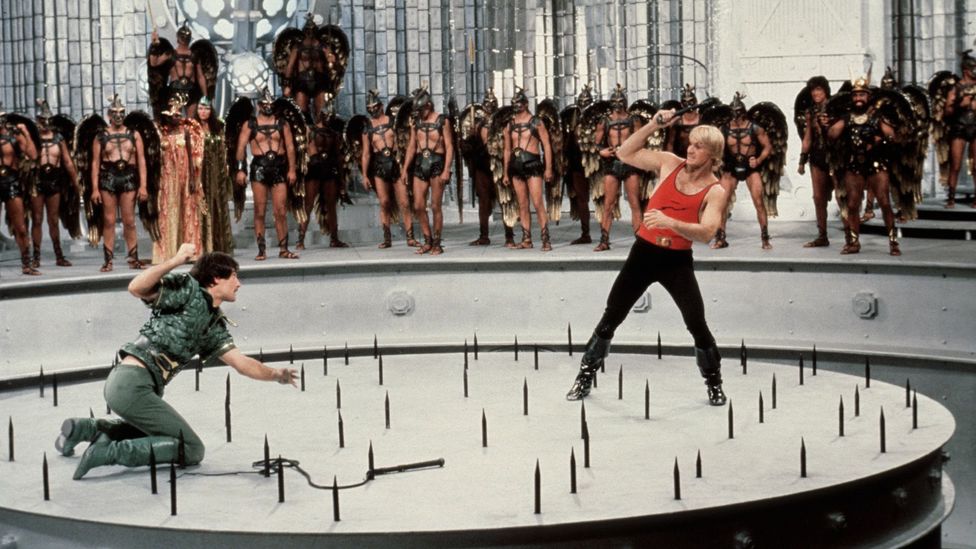 Despite lacking the special effects of Star Wars, Flash Gordon had a flamboyant style that has lasted over time (Credit: StudioCanal/Flash Gordon)

The contents of the book were comic strips drawn by Alex Raymond, and first published in US newspapers in 1934. (Funnily enough, Flash Gordon was only created because King Features couldn’t get the rights to Edgar Rice Burroughs’ John Carter of Mars, so there’s a lot to be said for being forced to come up with your own characters.) As Hodges read these strips on Concorde, he realised that he shouldn’t try to update the material, or to make it as dark and dystopian as so much 1970s science-fiction had been. He should simply use Raymond’s dynamic drawings as his storyboards. “It was quite a logical step to use the strip cartoon as our source, in terms of the angles, the primary colours – and the comic-strip acting, as well. Once I’d realised that, it was much easier.” Even now, when we have had countless superhero blockbusters, Flash Gordon stands as the live-action comic-strip film which is the most like an actual comic strip.

The plot is lifted almost entirely from Flash’s 1930s escapades. Scripted by Lorenzo Semple Jr, one of the lead writers of the self-mocking 1960s Batman television series, the film begins with Ming the Merciless (Max von Sydow), a sadistic alien despot, bombarding the Earth with tidal waves, earthquakes and something called ‘hot hail’. 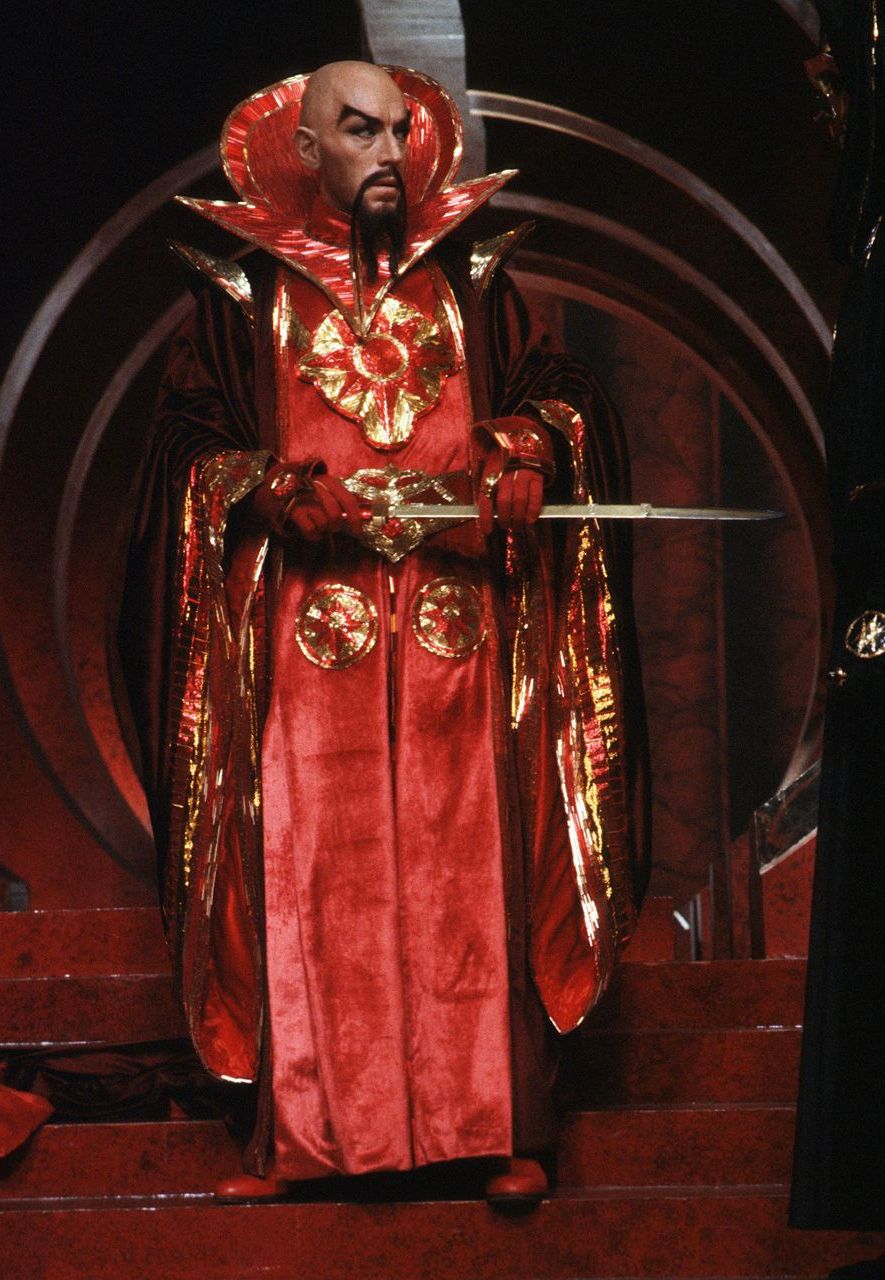 Ming the Merciless is now seen as an example of anti-Chinese sentiment (Credit: StudioCanal/Flash Gordon)

Flash Gordon (Sam J Jones), a hunky American football quarterback, and Dale Arden (Melody Anderson), a travel agent, are forced to investigate by a mad scientist, Dr Hans Zarkov (Topol). Once he has packed them into his home-made rocket, they fly into space and meet Ming, his seductive daughter Princess Aura (Ornella Muti), and his Darth Vader-crossed-with-Doctor Doom henchman, Klytus (Peter Wyngarde). Semple’s screenplay “was full of corny lines – which I kind of liked”, says Hodges. But at least one of those lines deserves a place in any anthology of Great Film Quotes: “Flash! Flash, I love you! But we only have 14 hours to save the Earth!”

The next question was whether or not such lines should be played straight. “Dino wanted to make the next Star Wars,” says Walsh. “The Buster Crabbe serial is actually quite dry, and Dino wanted the film to be faithful to that. He didn’t see it as camp at all.” 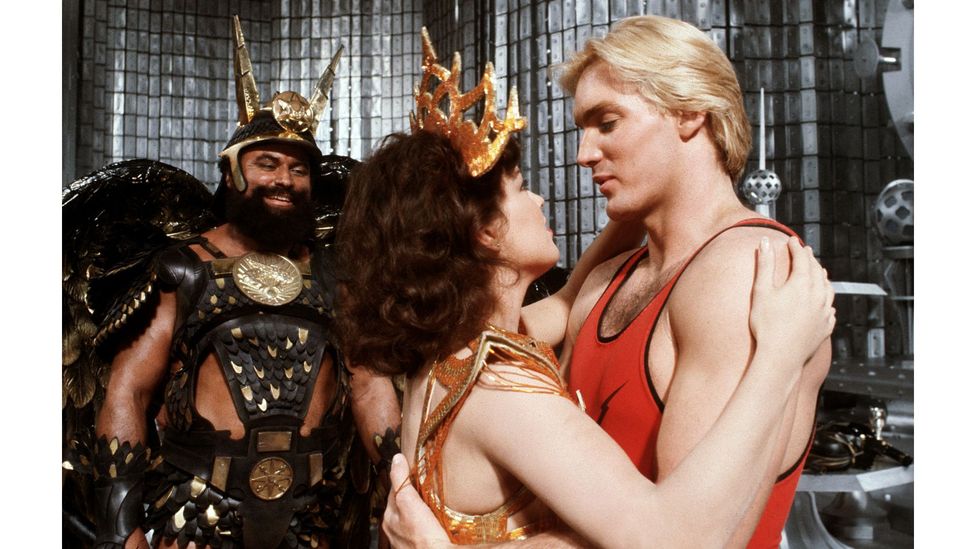 This led to some disagreements between the producer and his director. “Dino believed in Flash Gordon,” says Hodges, putting on an Italian accent to imitate De Laurentiis. “He’d always say, ‘Don’t forget, Flash-y Gordon, he save-y the world!’ You’d look at him and he was serious. I realised it was not possible to make it serious. It was Saturday morning cinema, so I really had to attack it from the comedic angle. When we showed the rushes, the crew would fall about laughing, but Dino didn’t understand it. He took me aside and said, ‘Mike, why they laugh?’ But he kept me on the straight and narrow. He made me take it seriously, even the comedy, so the film ended up with a balance between his belief and my cynicism.”

Game for a laugh

You can see that balance in the acting. Topol is light years over the top; Von Sydow has just the right measure of sly menace; Timothy Dalton, as the Errol Flynn-alike Prince Barin, is as grave and gruff as he would be a few years afterwards as James Bond; and Jones, a former model, US Marine and American footballer, doesn’t appear to be in on the joke. “Sam got terrible reviews,” says Hodges, “but I think unfairly because Flash is not exactly the sharpest knife in the drawer, and Sam believed in the innocence and simplicity of the character. At one point we were doing a fight scene, and I didn’t know what they should do next, so my assistant director said, ‘Flash should pick up that steel bar and hit someone on the back of the head.’ Sam was outraged. He said, ‘Flash Gordon would never do anything like that!'” 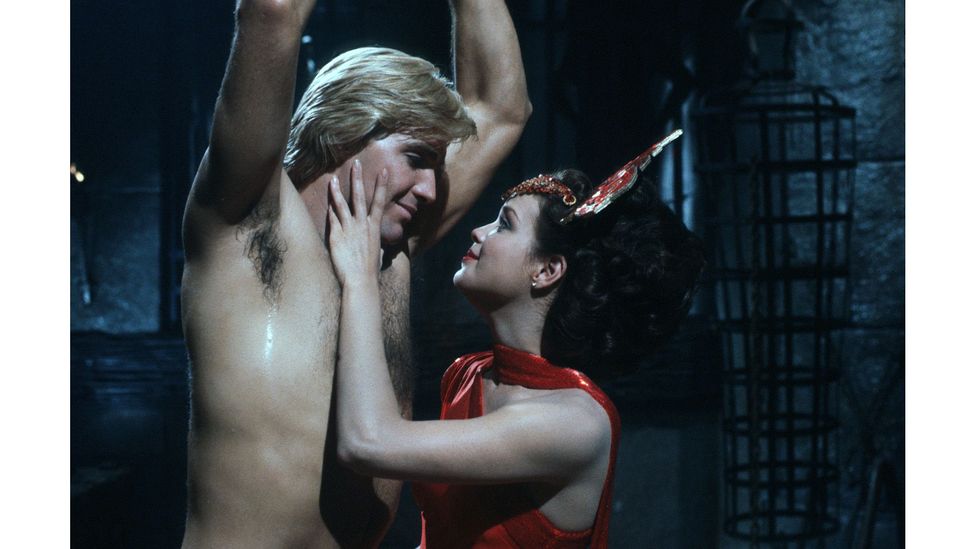 The film added an eroticism that wasn’t in other space operas, like Star Wars (Credit: StudioCanal/Flash Gordon)

As innocent as its hero might have been, the film around him is anything but. There is exposed skin everywhere you look, everyone lusts after everyone else, and there is so much phallic symbolism that Freud would need a cold shower after watching it. The most comparable mix of sex and sci-fi would be Barbarella, a 1968 De Laurentiis production, not that Hodges made the connection at the time: “I was too busy with my own film to watch other people’s.”

As with the imagery and the tone of Flash Gordon, the eroticism can be traced back to Raymond’s 1930s comic strips, in which women in skimpy harem underwear and men in tiny shorts are chained up and whipped on a regular basis. “I spoke to my American friends about Flash Gordon,” explains Hodges, “and they said that a lot of their sexual fantasies came from the comic strip. They loved all those pictures of the voluptuous Princess Aura. I took that as a green light to run it at two levels, with the action angle for the younger audience, and the sexual stuff for the older audience.”

That decision may have scuppered the film’s box office prospects in conservative parts of the US. And, partly as a result of its under-performance, the sequel De Laurentiis originally talked to Hodges about was never made. But, along with its fabulous retro design, its adrenaline-pumping rock operatics, and its signature mix of earnest grandeur and winking humour, the sex in Flash Gordon helped to ensure its eventual cult status. And it’s certainly steamier than Star Wars. “I regard them as completely different,” says Hodges. “Star Wars is so bland beside the colours of Flash Gordon, I don’t see any connection between them at all.”