The blaze captured in the false-color satellite image above is just one small part of a much bigger wildfire, which is just one among hundreds that have scorched Siberia since winter ice and snow melted in May.

Meanwhile, half a world away, a brutally hot August in the western United States has fueled vicious fires in California, as well as in my own state of Colorado. In this post, and a Part 2 to follow, I’ll share some remarkable remote sensing imagery of what I think is fair to call a pandemic of wildfire.

When the Sentinel 2 satellite flew over the intense Siberian wildfire above on Aug. 18, 2020, it was torching new territory on the eastern side of a wildfire complex that was twice the size of New York City. (For a bigger, better version of the image, go here.) 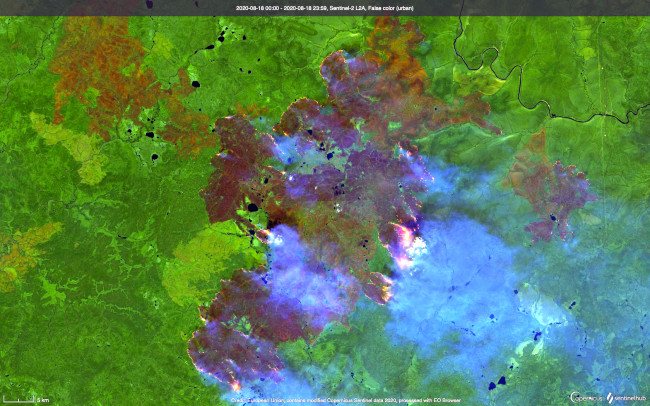 The Sentinel 2 satellite captured this false-color image of wildfires burning in Russia’s Sakha Republic on Aug. 18, 2020. The recently burned area, visible in rusty tones, is about twice the size of New York City. It lies about 90 miles northwest of the town of Chernyshevsky. (Credit: Copernicus Sentinel 2 data processed by Tom Yulsman using Sentinel Hub EO Brownser)

The image above shows the entire complex on the same day. As I’m writing this story on Aug. 29, the fires are still burning, and they’re even bigger now. (Go here for a higher resolution version.)

Broadening the perspective even more, here is the view from NASA’s Terra Satellite on Aug. 18th: 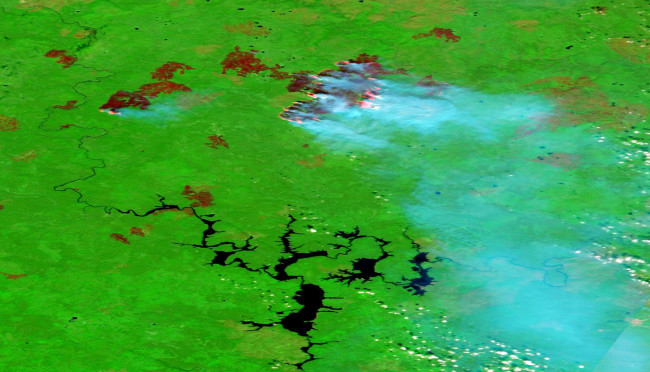 From left to right, the image covers an area about 120 miles across. Reddish tones show burned areas. These fires were burning about 120 miles south of the Arctic Circle, and just north of the giant reservoir visible in the lower half of the image, created by the Vilyuy Dam. (Bigger, higher resolution version.)

The fires blazing across Siberia all summer have been fueled by particularly warm temperatures that have gripped the entire region for many months.

For the past year, Siberia has experienced temperature anomalies that have nearly been off the charts. (Credit: Climate Science, Awareness and Solutions, Columbia University Earth Institute)

“In the first six months of 2020, Siberia experienced a period of unusually high temperatures, including a record-breaking 38 degrees C in the town of Verkhoyansk on 20 June, causing wide-scale impacts including wildfires, loss of permafrost, and an invasion of pests,” according to a report from World Weather Attribution, an international scientific effort to analyse the influence of climate change on extreme weather. That heat wave was so intense that “it contributed to raising the world’s average temperature to the 2nd hottest on record for the period January to May.”

And that heat “would have effectively been impossible without human-induced climate change,” the report states.

A half continent away, in the state of Colorado, much of the mountain snowpack melted away fast and early this spring — part of a long-term trend associated with climate change. Unusually warm conditions (including what appears to be the warmest August on record in Denver), along with a lack of rain, left the state vulnerable to wildfire.

And the the flames did indeed erupt.

That’s my usually lovely state in the video of above. I say “usually” because smoke from wildfires here and in California blanketed the Front Range urban corridor at the eastern foot of The Rockies for days on end, causing nasty air quality and blood red sunsets.

The video is an animation of images acquired by the GOES-16 weather satellite on Aug. 15, 2020. To create it, I layered visual data collected in the visible portion of the electromagnetic spectrum with infrared data to show both wildfire smoke and burning areas. As the day progresses and gets warmer, you can watch the fires explode in intensity.

The Scorching of California

To the west in California, the view from space has at times seemed apocalyptic — as I think this image demonstrates: 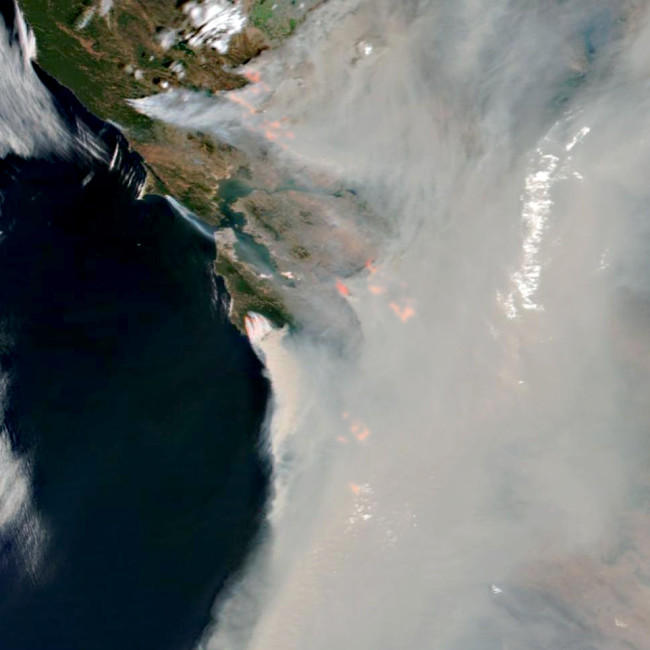 It’s a natural color view based on visible light collected by the Suomi-NPP satellite on August 19th, combined with infrared data to reveal the heat from blazing fires.

If you were in space at that time, you would surely have seen the smoke, but not those orange hot spots. That’s because our eyes can’t see in the infrared. But the satellite sensor can. 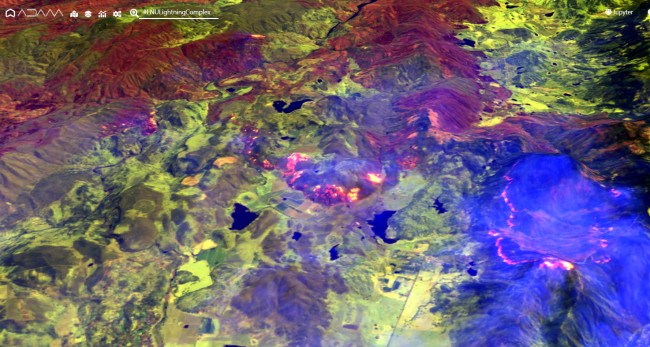 Data collected by the Sentinel 2 satellite on Aug.25, 2020 were used to create this simulated three dimensional view of the LNU Lightning Complex, a group of fires in Northern California. In this image, about nine miles of the northern front of the wildfire complex are visible. (Credit: Image courtesy of Antonia Vecoli)

This image is both fascinating and disturbing. It shows a portion of a complex of wildfires that as of today (Aug. 29) has scorched 580 square miles of Northern California — an area bigger than the city of Los Angeles. Called the LNU Complex, the wildfires were sparked by lightning on Aug. 17 and have since affected five counties.

At 44 percent containment, the LNU Complex has so far killed five people and destroyed 1,080 structures. It’s the third-largest wildfire on record in California. In second place is the SCU Lightning Complex burning in the South Bay area. The Mendocino Complex, which burned across 459,000 acres in 2018, is the state’s largest fire on record.

Scientists have linked increased wildfire activity in California to human-caused climate change. For example, a study published last year, led by Park Williams of Columbia University’s Lamont Doherty Earth Observatory, found that “since the early 1970s, California’s annual wildfire extent increased fivefold, punctuated by extremely large and destructive wildfires in 2017 and 2018.” A dramatic expansion in the amount of forest area burned during summer was the main factor — and this was “very likely driven by drying of fuels promoted by human-induced warming,” Williams and his colleagues found.

In the second installment of this look at 2020’s pandemic of fire, I’ll focus more on the smoke they’ve been producing — and how far it has travelled.