Almost one year ago, a relatively small blast from the crater of New Zealand’s Whakaari (White Island) turned what might have been a breath-taking tour of a volcano into a tragedy in an instant. The explosion, driven by water rapidly flashing in steam by the heat of magma beneath the volcano, sent ash and debris out from the crater lake on the island. This superheated mix of steam and rocks killed 22 people and injured dozens more. It was a volcanic disaster that might have been prevented, but how to judge who might be to blame?

After a long investigation, New Zealand’s WorkSafe is leveeing charges on 13 parties over the tragedy. Some are businesses like the tour operators and helicopter companies. There are also three individuals who were charged with negliance. However, GNS Science, New Zealand’s volcano monitoring agency, was also charged.

It is not known exactly what the charges are at this point, but including GNS Science in the charges is reminescent to the charges placed on INGV scientists in Italy after the 2009 L’Aquila earthquake. In that case, the seismologists were originally convicted on manslaughter because they had downplayed the risk of a large earthquake at L’Aquila. When an earthquake struck not long after, killing 309, those seismologists were blame. However, after a lenghty legal battle, the Italian Supreme Court acquitted the scientists.

This opened a can of worms: should scientists be held to blame when disasters occur? Most of our ability to forecast/warn against events like earthquakes and eruptions cannot say that they will happen at an exact date and exact time. For earthquakes, Earth scientists can look to see the probability of future earthquakes on known faults based on past activity. There isn’t a way to definitely say an earthquake will happen and although playing down the hazard is dangerous, the INGV scientists also had to contend with charlatans making bold (and wrong) predictions of an earthquake.

For volcanoes, we look for signs of potential new eruptions in gas emissions, earthquakes and deformation of the land’s surface. Even when those signs present themselves, an eruption may not occur … and if one does occur, it is not possible to know both when and how big. This is especially challenging when the eruptions are steam-driven as they rarely have many signs before they happen. 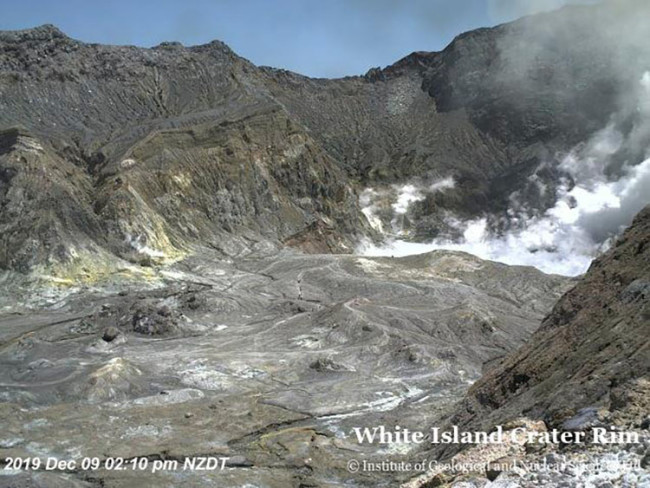 The crater at Whakaari a minute before the December 9, 2019 explosion that killed 22 people. Credit: GNS Science.

In the case of Whakaari, GNS Science had raised the alert level at the volcanic island before the December 9, 2019 blast, yet they have not called the island “off-limits”. The island is privately owned and tours are operated by a private business. GNS Science information on the unrest was used by the companies.

The question here is what exactly is the nature of the charges against GNS Science. With the L’Aquila earthquake, there was uproar amongst Earth scientists against the charges. The fear was that it would make scientists who work to protect us from disasters like earthqiakes and eruptions would become more hesitant to speak up about hazards for fear of being charged if something terrible happened.

GNS Science has defended their actions before the Whakaari eruption — they followed the same process that they had established for defining the hazard at New Zealand volcanoes. The system was effective prior to December 2019, although not perfect.

I’ve always been skeptical of the Whakaari crater tours. Bringing people to an active volcanic crater without any training and with minimal safety gear is problematic at best. At worst, we end up with the Whaakari disaster. If the decisions to run these tours is left to private operators, the fear that profit will trump safety always hangs over the activity. The worse thing you can do around an active volcano is become complacent to the danger.

As Dr. Shane Cronin points out, maybe a serious review of the expectations society has for monitoring and disaster agencies needs to happen. If the charges here against GNS Science move the needle towards changing the roles, resources and demands on these agencies, we could create a better system.

The problem lies in whether people are interested in systemic change in disaster monitoring — that is to say, do we think it is reasonable for society to expect more precise forecasts of activity — or are people merely interested in blame. With every tragedy, there is the desire for blame. Whose fault is it that people died? Sometimes it is obvious who is at fault. Other times, things just happen. Can we attribute blame to scientists who are trying to offer sometimes complex and naunced interpretation of dynamically changing situations?

Could GNS Science have offered a more forceful warning about the activity at Whaakari last December? Maybe, but in the face of past activity at the island, it was not possible to say that the unrest was going to lead to this disaster. Ultimately, it was up to the tour operators about whether they continued to bring people to the island, ideally using the best information they had from GNS Science.

Yet, if this does serve as a wake up call to take potential hazards seriously, then maybe some good can come from this. A lack of guidance from authorities of how to handle potentially deadly situations has wrought an immense amount of pain on the planet this year. We should not blame scientists who were working to prevent disasters — this does take us down the road of preventing scientists from speaking up about potential hazards when they are supported by the data. Yet, disasters can be prevented when we reflect on what went wrong the last time.