A new preprint makes a bold claim: that “synergistic interactions are the fundamental drivers of complex human cognition”

What does this mean, and what are the implications for neuroscience?

Authors Andrea I. Luppi et al. of the University of Cambridge study a new aspect of brain organization: synergy between brain regions. Some networks of the brain are more synergistic than others, and synergistic networks tend to be involved in complex cognition.

As an example, consider two balls moving in space. The two balls might or might not collide. If we know the current trajectory of both balls, we can predict what will happen – including collisions. But if we only know the trajectory of one ball, we can’t predict the path of either ball very well, because we wouldn’t be able to predict collisions.

In neural terms, if two brain regions have high synergy between them (synergistic interaction), I think the most straightforward interpretation would be that complex two-way interactions are occuring between them – but see later for caveats.

What Luppi et al. do is to divide the brain into 232 regions, and then for each pair of regions, they calculated the degree of synergy between the two activity timecourses in that pair, based on resting state fMRI data from the Human Connectome Project. For each region they then calculate the average synergy between that region and all of the others.

In the same way, Luppi et al. also examined ‘redundancy’, which is, loosely speaking, the opposite of synergy. Two variables are redundent if both variables provide the same information about the future of the pair.

This is the map of synergy – redundancy. Brain regions in red show high synergy and low redundency, those in blue have more redundency. 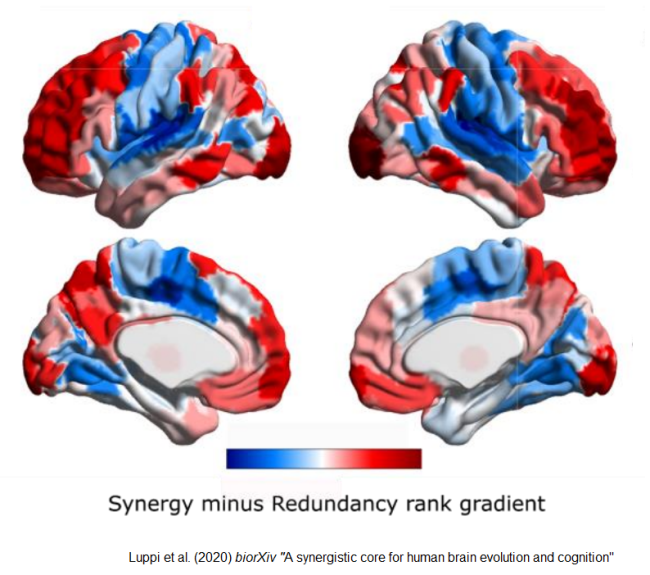 This map is the core of the preprint. The rest is basically commentary on this, showing how this synergy-redundancy map is also similar to other maps such as a map of areas involved in complex cognitive functions, a map of areas showing high synaptic density, gene expression maps, and a map of areas that expanded in humans vs. chimpanzees. The implication is that synergy has something to do with higher brain function:

Synergistic interactions are ideally poised to act as a global workspace, allowing the integration of complementary information from across the brain in the service of higher cognitive functions.

This is a very impressive piece of work that integrates a wide range of different datasets. Luppi et al. make a strong case that there’s a network of brain areas that tend to participate in synergistic interactions. But what exactly does the synergy mean?

I mentioned before that synergy could be seen as a measure of complex, ’emergent’ mutual interaction between two brain regions. This is an attractive interpretation, but it is not necessarily the correct one.

For instance, I’m pretty sure that two areas could have a ‘synergistic interaction’, even if neither area was even sending any signals at all. This would happen if both areas were receiving signals from other areas that really were interacting.

To get to the bottom of this, Luppi et al. could extend their analysis to consider more than two regions at once. (They include 232 regions, but only look at interactions involving two at a time, as far as I know). Mathematical tools to do this are available e.g. multivariate Granger causality (see also).